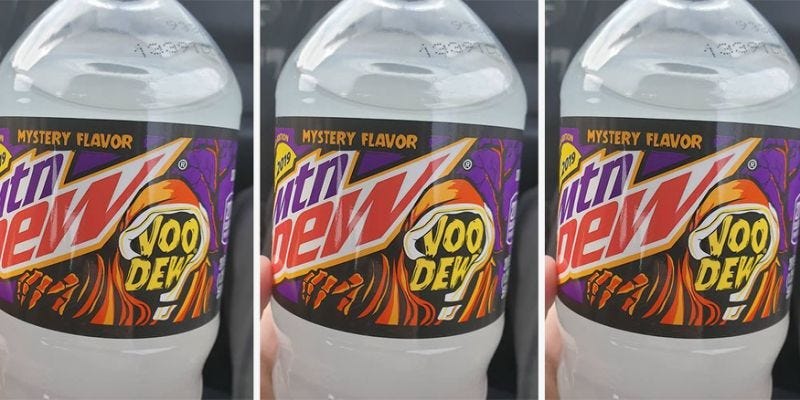 Mountain Dew has released its limited-edition Mountain Dew Voo Dew in advance of Halloween -- its packaging includes a creature that looks like Grim Reaper -- but soda maker PepsiCo isn't divulging what the flavor is.

Instead, it's asking the public to guess what the flavor.

"Halloween has come early this year, and ... MTN DEW® will be bringing the mystery with VooDEW — a devilishly delicious new limited edition flavor," Mountain Dew says on its website. "VooDEW has everything you need to get into the sweet, spooky spirit."

OK, so what does it taste like? 1010 WINS enlisted its resident taste-testers -- Adam Bloom, Walter Geis, Kimberly Dole and David Caplan -- to tickle their taste buds with the mystery drink and share what they believe the flavor is. They mulled it over, scratched their head -- and Geis got into the spirit and enlisted a magnifying glass!

WALTER GEIS: At first, I thought it had the same flavor as a chewed-up Skittles. But I don't think the Skittles people and the Mountain Dew people work together, so my final answer is grapefruit.

Full disclosure: I'm terrible at guessing mystery flavors... but what I think happened here is Mountain Dew used its alleged "voodoo power" to make a milder version of Fresca. I just hope, for their sake, the Fresca lawyers are into the Halloween spirit.​ 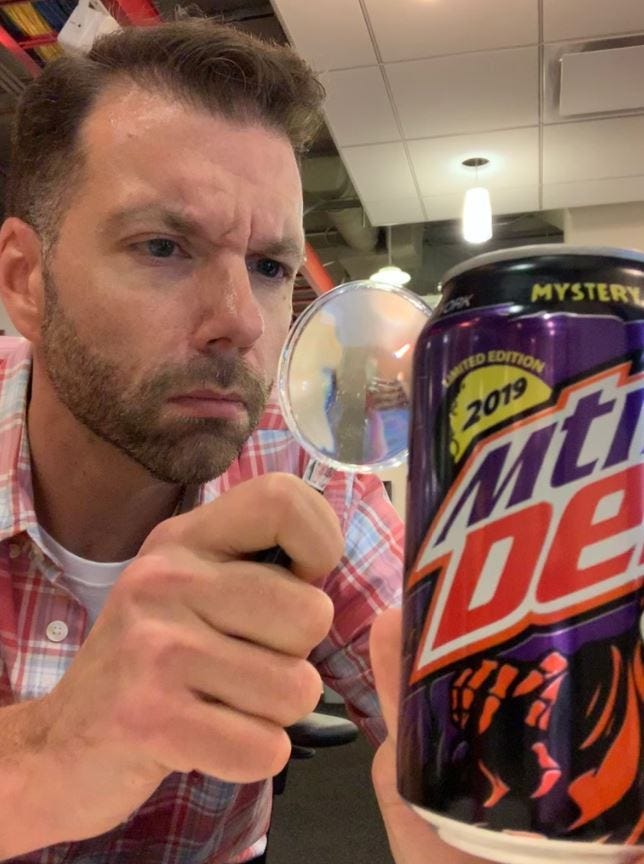 ADAM BLOOM: Imagine coming back to your desk and seeing a can of soda with the words “Mystery Flavor” cryptically written on the side. Perhaps no better time than a Monday afternoon to try out this new limited edition of Mountain Dew so I can rock through the rest of my day at 1000 mph.

Initial Thoughts: First sips were not that bad – pretty sugary but goes down pretty smooth. It’s a clear color – but I’m having trouble coming up with this mystery flavor. I’m tasting a bit of vanilla – perhaps it is Vanilla Mountain Dew.

I keep picking up the can and drinking more though – and I don’t think it’s that bad. I think it would be best over ice (I feel that way about all soft drinks.) The can is throwing me a bit as it has a scary Halloween theme so I was expecting candy corn or pumpkin Mountain Dew. The drink feels more tame though. Bloom Stars: 3 out of 4. Guest Flavor: Vanilla 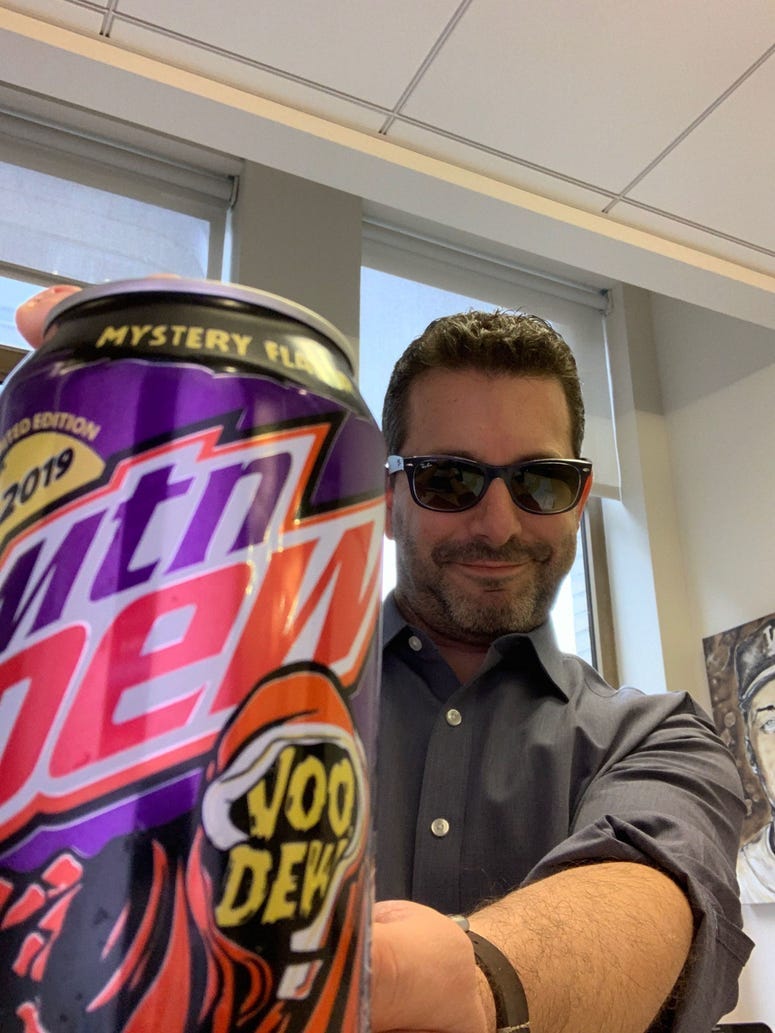 KIMBERLY DOLE: I'm not a big soda drinker but I'm always up for solving a good mystery.

One sip of this drink brought back so much nostalgia. It was really sweet and definitely tasted like a familiar candy from my childhood but I couldn’t quite put my finger on it.

I tried to cheat and see if the color of the soda would give me any hints to what the mystery flavor was, but I couldn't because the soda was clear!

As I examined my drink, I realized that the purple and and orange can held no clues for me either. So, after a few more sips I tried to narrow it down and my best guess is that Mountain Dew's mystery flavor is … (drumroll) ... a pink Starburst! 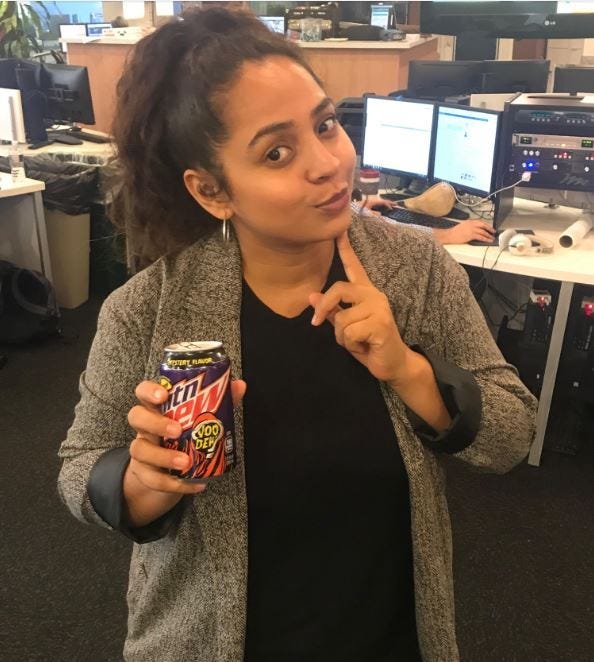 DAVID CAPLAN: I love a good mystery, but it kind of drove me crazy what I was really consuming.

OK, so at first, I have no clue what flavor it is. I take sip after sip -- and nada. But this flavor is familiar. I've definitely had it before. But let's be honest, it's all chemicals.  You could tell me it's grape and I'd believe you.

I'm probably grasping here, but I thought it may be bubblegum or cotton candy or maybe -- and I mean maybe -- tea. BUT then it hit me. Hmmm....a Halloween-inspired flavor. I thought... candy corn! Alex, that's my final answer! 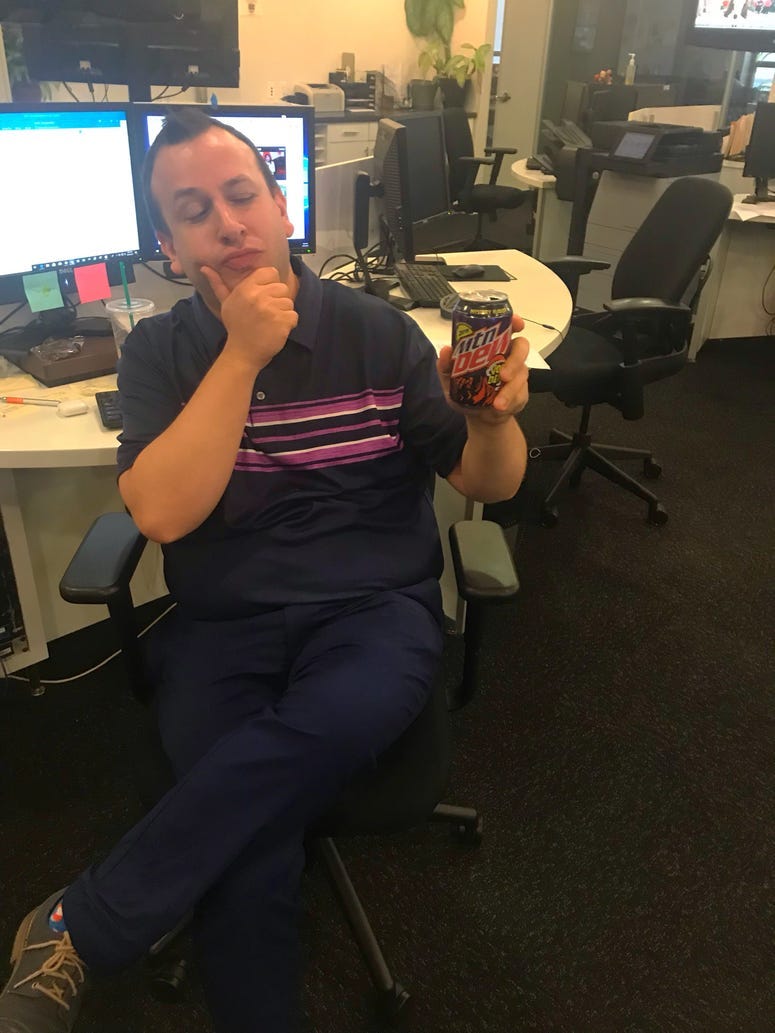