Giovanni Cucuzza, 28, Joseph Glorioso, 31, and John Desiderio, 34, whoare all members of the 61st Precinct in Brooklyn, were bowling with Laura Ciccarello, 28, Cucuzza’s fianceé, at a bowling league tournament at approximately 7 p.m. on Sunday. 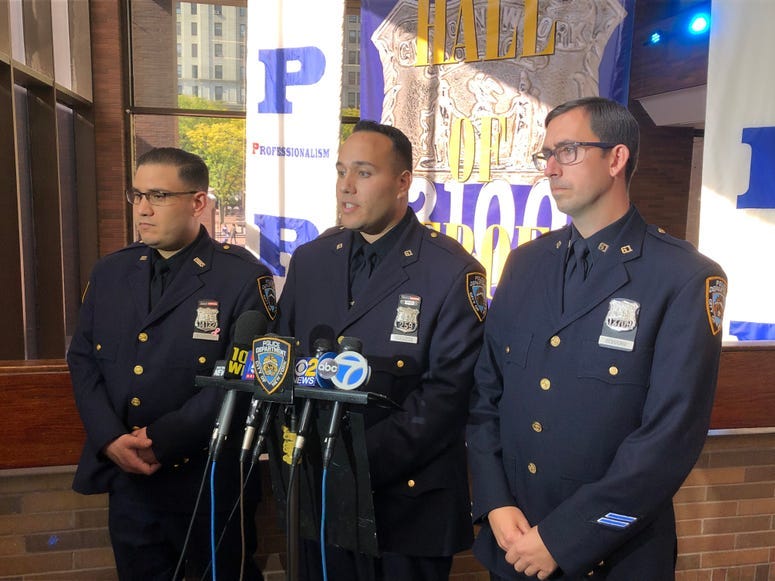 Police say each member of the trio played a role in reviving the man, using resuscitation devices available at the bowling alley.The man was placed on his back and Cucuzza ran to retrieve the lane’s defibrillator as Desiderio, performed chest compressions, and Glorioso checked for vital signs.

The man had no pulse and the officers ripped open the man’s shirt and used the defibrillator in an effort to restore the his heartbeat while emergency officials arrived.

Ciccarello said the the man became responsivey and were finally able to recover his heartbeat.“We were very, very happy,” Cucuzza said of himself and his fellow officers, Desiderio and Glorioso.Shortly after, EMS arrived,  the victim of cardiac arrest at Rab’s Country Lanes was transported to Staten Island University Hospital North in Ocean Breeze just before 8 p.m., an FDNY spokesman said.“It was just amazing seeing all three of them work together," Ciccarello said. “They saved the man’s life."