NEW YORK (1010 WINS) -- Hundreds of NYPD officers and members from other city agencies are being sent to neighborhoods in Brooklyn and Queens that are seeing an uptick in coronavirus cases to help with outreach and enforcement of health requirements.

Mayor Bill de Blasio said Wednesday that at least 400 NYPD officers, 250 compliance officers from other city agencies and 300 Test & Trace Corps members are heading to the "target ZIP codes" to distribute masks, provide information and do "when necessary, compliance work."

De Blasio said the city continues to monitor increases in the neighborhoods and is conducting outreach to community members and businesses.

The mayor said businesses can be fined or shut down "on the spot" if there are repeated COVID violations. He said the Sheriff's Office and Office of Special Enforcement would be continuing "intensive outreach" in the areas.

“In six of the eight neighborhoods, we see, unfortunately, an increase. And now the neighborhood of Kew Gardens has surpassed that 3% level we’re watching carefully,” de Blasio said. “We’re continuing to monitor four additional ZIP codes that are lower, but we want to be very careful, because we’ve seen some increases.” 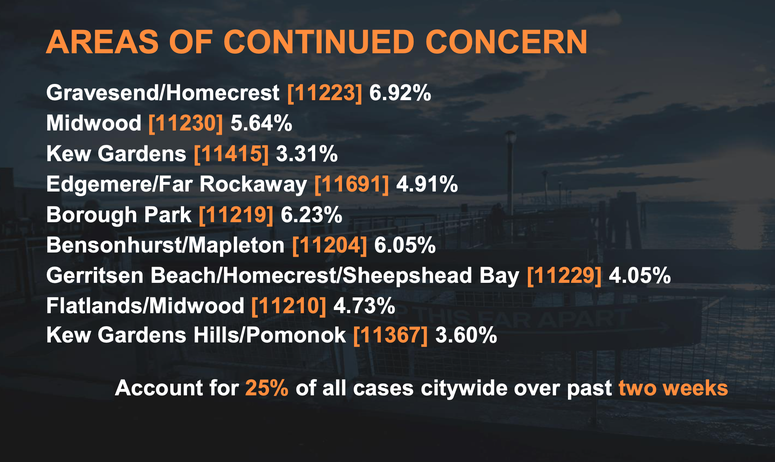 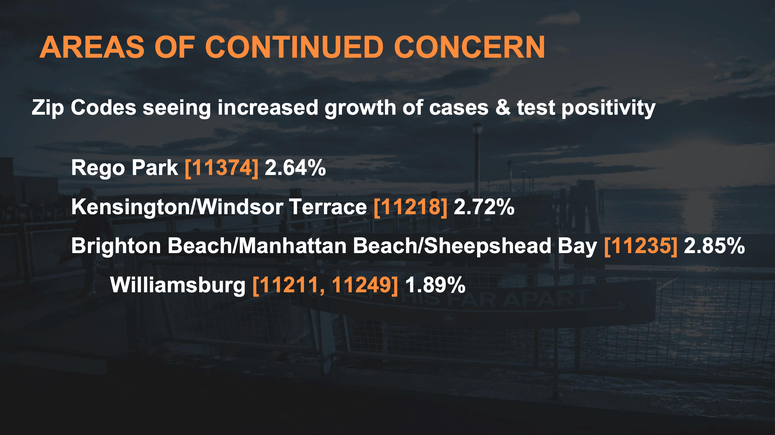 In addition to outreach, testing is being increased in the areas of Brooklyn and Queens. Eleven mobile testing sites are being moved in and capacity at Health Department COVID express testing sites is being tripled, de Blasio said. 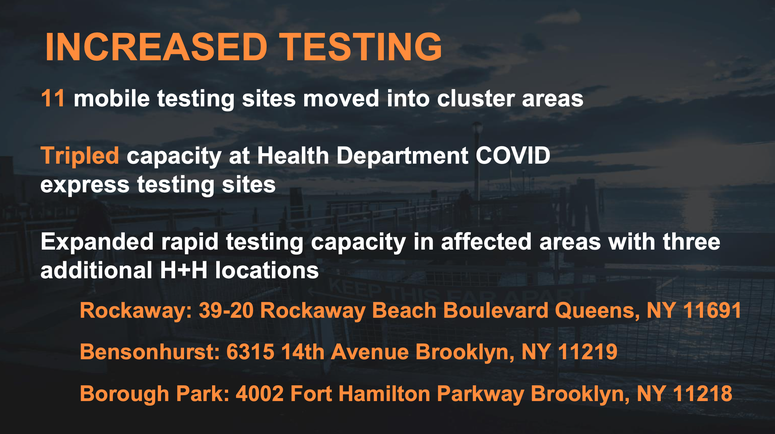 “Block parties” are also being held where streets and sidewalks are converted into testing sites. There will be six sites to start that can perform 500 tests per day.

The daily number of people admitted to city hospitals with suspected COVID-19 was 87 on Sept. 28, with a confirmed positive rate of just under 9%.

The number of new reported cases on a seven-day average citywide was 354.

The percentage of people testing positive citywide for COVID was 0.94%.

The percentage of people testing positive on a seven-day rolling average citywide was 1.46%.