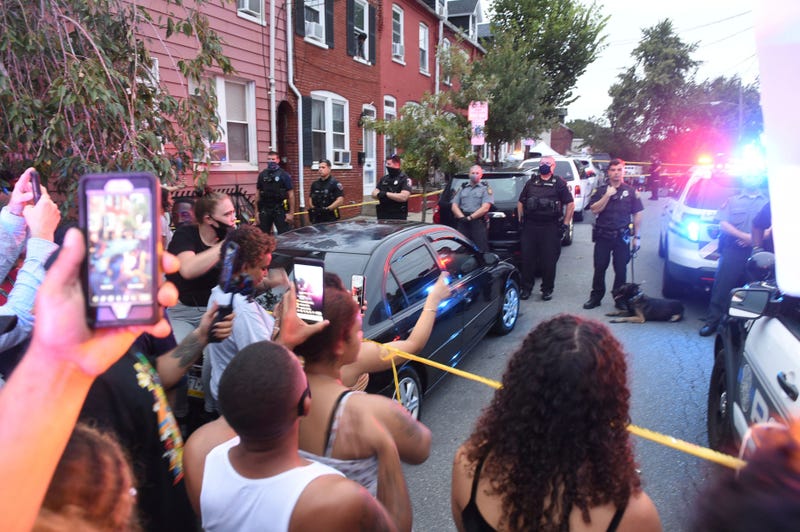 Photo credit People chant during a protest at the scene of a police shooting on Laurel Street and Union Street in Lancaster city on Sunday, Sept. 13, 2020.A man was shot by police earlier in the day after a reported domestic dispute, police said. A Lancaster city police officer fired at a 27-year-old man who was armed with a knife. The man, identified as Ricardo Munoz, was killed and pronounced dead at the scene, (Andy Blackburn/LNP/LancasterOnline via AP)
By The Associated Press

LANCASTER, Pa. (AP) — Judges dramatically reduced bail amounts as high as $1 million Thursday that had been set this week for several people accused of crimes during unrest in Lancaster, Pennsylvania, that included protests and vandalism to public buildings.

Bail for nine of 13 defendants was lowered, in several cases so they will not have to put up any money to be released, LNP reported.

Bail for two defendants was reduced from $1 million to $50,000 unsecured, clearing the way for their release pending trial, the news organization reported.

In other cases, defendants will still need to post bail of $25,000-$100,000, which means they may have to come up with a portion of it in cash to pay the bail bondsman.

The charges stem from unrest over the shooting by police of Ricardo Munoz, a Lancaster man who was wielding a knife after his sister sought to have him committed for mental health treatment.

Police body camera video that was made public shows the 27-year-old Munoz brandishing the knife before the officer shot and killed him. Munoz had been awaiting trial on allegations he stabbed four people last year.

The charging documents filed by police over the demonstrators' actions described them all as instigators, which defendants' family members and supporters have in some cases hotly denied.

The protests Sunday night and early Monday were followed by rioting that caused damage to Lancaster’s police headquarters and other downtown buildings. An arson fire blocked a downtown intersection.

news
CVS adding 1,000 rapid-result COVID-19 tests sites by end of the year
news
Krispy Kreme and other chains offering freebies for voting on Election Day
news
What you should and shouldn’t bring to the polls this Election Day
sports
MLB rips Justin Turner for celebrating with teammates after positive test
news
WATCH: Hurricane Zeta rips the roof of a house completely off
sports
Gold Glover Kolten Wong a free agent after Cardinals decline option