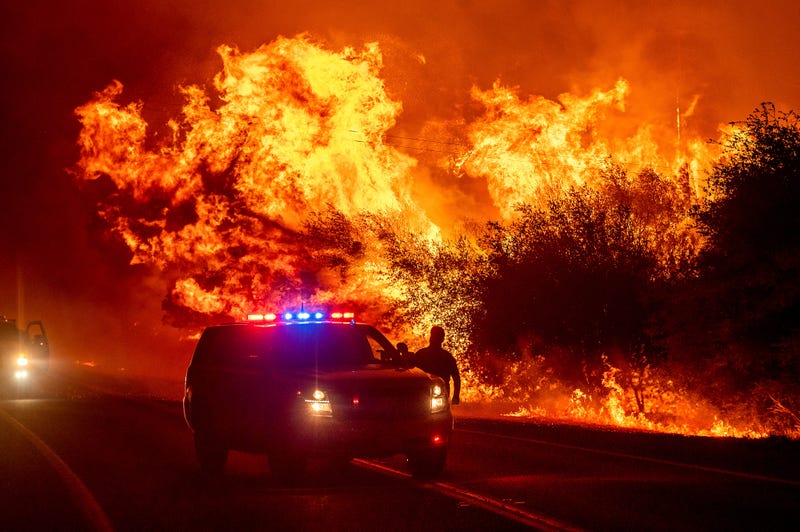 Photo credit Flames lick above vehicles on Highway 162 as the Bear Fire burns in Oroville, Calif., on Wednesday, Sept. 9, 2020. The blaze, part of the lightning-sparked North Complex, expanded at a critical rate of spread as winds buffeted the region. (AP Photo/Noah Berger)
By The Associated Press

Your daily look at late-breaking news, upcoming events and the stories that will be talked about today:

1. WILDFIRES RAVAGE U.S. WEST Wildfires in heavily populated northwest Oregon were growing, with hundreds of thousands of people told to flee while the death toll in a Northern California wildfire rose to at least 10, making it the deadliest of the year.

2. AMERICA COMMEMORATES 9/11 In New York, a dispute over virus-safety precautions is leading to split-screen remembrances while both Donald Trump and Joe Biden will pay respects at the same memorial in Pennsylvania without crossing paths.

3. RACE A PREDICTOR OF SCHOOL REOPENINGS Districts with mostly white students are more likely than those with mostly Black or Latino ones to open their doors, an analysis by the AP and Chalkbeat reveals.

4. MACRON’S BLUEPRINT RAISES QUESTIONS The French president gave Lebanon’s politicians a road map for policy changes and reform, leading residents of the tiny Mediterranean country to question whether Lebanese can rule themselves.