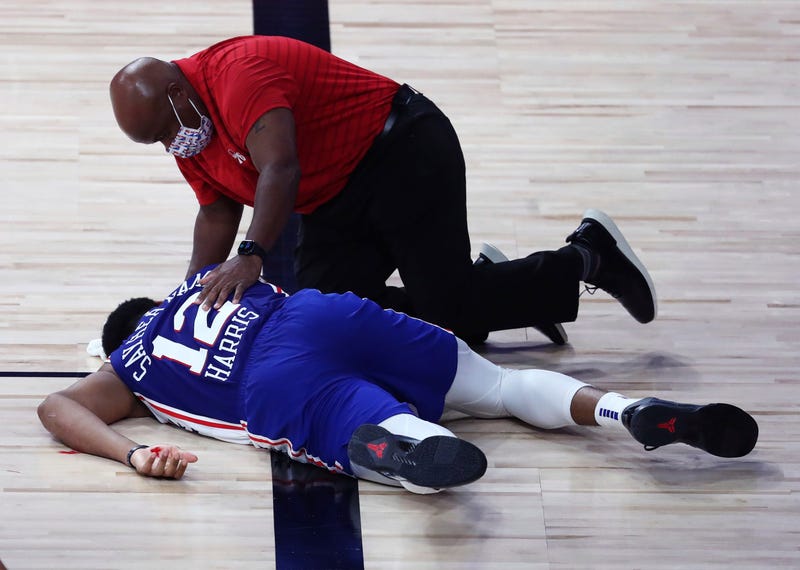 Photo credit Philadelphia 76ers forward Tobias Harris (12) is attended to after hitting his head against the Boston Celtics during the third quarter of Game 4 of an NBA basketball first-round playoff series, Sunday, Aug. 23, 2020, in Lake Buena Vista, Fla. (Kim Klement/Pool Photo via AP)
By The Associated Press

LAKE BUENA VISTA, Fla. (AP) — 76ers forward Tobias Harris left Game 3 of Philadelphia's first-round playoff matchup with Boston after bloodying his face in a fall. The team said he suffered a left eye laceration and was being evaluated for a possible concussion.

Harris was trying to contest a shot by Jayson Tatum at the 2:40 mark of the third quarter and inadvertently had his legs taken out from under him by Tatum. Harris fell on the left side of his face. He laid on the court for several minutes as medical staff attended to him.

He was eventually able to walk off the court on his own power with a towel over his face, but blood was visible both on the towel and on the court. Coach Brett Brown told ESPN after the quarter ended that Harris told him he was OK shortly before he left the court.

Harris led the 76ers with 16 points on 5-of-9 shooting at the time of the injury.