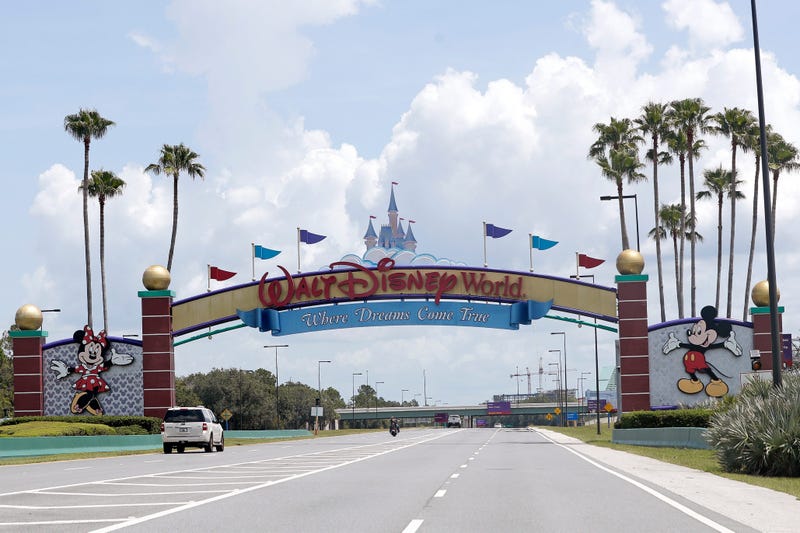 Photo credit FILE - In this Thursday, July 2, 2020, file photo, cars drive under a sign greeting visitors near the entrance to Walt Disney World, in Lake Buena Vista, Fla. A new television show about the residents and caretakers at Walt Disney World's Animal Kingdom is being produced by National Geographic and will start streaming in the fall of 2020 on the Disney+. (AP Photo/John Raoux, File)
By The Associated Press

ORLANDO, Fla. (AP) — Walt Disney World and the union for its actors and singers reached an agreement on Wednesday that will allow them to return to work, more than a month after they said they were locked out of the reopening of the theme park resort for publicly demanding coronavirus tests.

Disney agreed to have a state-run drive-thru COVID-19 testing site for workers and the public at the Florida theme park resort. That decision encouraged Actor's Equity Association to sign a memorandum of understanding allowing the actors, singers and stage managers to return to their jobs.

“We have been consistent that testing is an important part of ensuring a safe workplace for Equity performers, and today, I’m pleased to see that Disney World has agreed,” Kate Shindle, president of Actors’ Equity Association, said in a statement.

Disney officials said in a notice to its workers that there would be a dedicated testing lane for its workers and their families, and that reservations could be made for testing starting Thursday.

“As a reminder, testing is voluntary and Cast Members will not be paid for testing time," the notice said.

Disney released a statement later Wednesday saying that allowing the testing locations was not in response to union demands.

“The Florida Division of Emergency Management will operate the location, which is available to cast members and their immediate families, as well as Florida residents,” the statement said. “Our actions support all cast and our community at large.”

Actors’ Equity Association filed a labor grievance against Disney World, saying its members faced retaliation for demanding the coronavirus tests before Disney World's theme parks reopened to visitors last month after being closed since March because of the pandemic. About 220 actors and singers initially were called back to work, but that invitation was rescinded after the union made public its concerns about the lack of testing, according to the union.

It was unclear how many actors and singers would be called back now that an agreement has been signed.