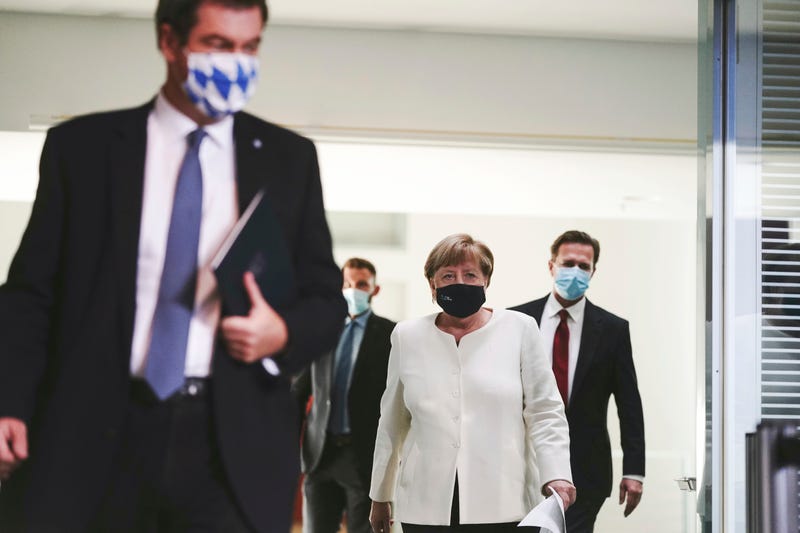 Photo credit German Chancellor Angela Merkel, centre, arrives to take part in a coronavirus press conference, in Berlin, Tuesday, Sept. 29, 2020. Chancellor Angela Merkel and the governors of Germany’s 16 states conferred on how to prevent the country’s coronavirus infection figures from accelerating to the levels being seen in other European countries. (Kay Nietfeld/dpa via AP)
By The Associated Press

BERLIN (AP) — Chancellor Angela Merkel and the governors of Germany’s 16 states agreed Tuesday on plans meant to keep the country’s coronavirus infection figures from accelerating to levels being seen in other European countries, while keeping schools and businesses open if possible.

New infections in Germany have hit the highest levels since April in recent weeks, with more than 2,000 per day on several occasions. That is still well below the numbers seen at the height of the pandemic's first phase, and far from the figures now being recorded in some other European countries — notably France and Spain.

But it has set alarm bells ringing in Germany and Merkel noted that new infections have basically been doubling monthly since June, meaning that if the rate is not slowed Germany could be seeing 19,200 daily infections by December.

“That underscores the urgency of our talks,” she told reporters.

Infection rates in Munich and some other cities have recently hovered around the mark of 50 new cases per 100,000 residents a week. Infection spikes are cropping up elsewhere, such as in the western town of Hamm, where a persistent outbreak has been linked to a wedding party.

To ensure outbreaks can be more easily tracked, fines of at least 50 euros ($59) per incident will be levied if customers give fake names or contact information to restaurants or other businesses.

Complete school shutdowns are meant to be avoided by keeping class groups apart from one another, so that they can be more easily isolated and tracked if the virus is detected.

Under a “hotspot strategy," further restrictions will be linked to local developments, Merkel said, stressing that the aim is to act “regionally, specifically and accurately.”

“A complete shutdown of the country must be prevented,” she said.

Extant distancing and mask regulations will remain in effect, and a new two-level plan envisions greater restrictions first being put into place when the level of infection in an area hits 35 new cases per 100,000 per week.

At that level, group gatherings in public or rented facilities will be restricted to 50 people, and individuals will be “urgently recommended” to keep private home gatherings no larger than 25 people to make contact tracing easier if there is an outbreak.

When infections hit 50 cases per 100,000 people per week, public gatherings will be restricted to no more than 25, and private individuals will be recommended to keep their gatherings to 10.

Bavarian Governor Markus Soeder said the government's hope is to “motivate, not irritate” people with the restrictions while avoiding a general lockdown.

“For many younger people, common sense means not only common sense for yourselves, but protection for neighbors, for parents, for grandparents, for friends, for the chronically ill or otherwise disabled in our country,” Soeder said.

Germany has recorded more than 288,000 cases of COVID-19 since the pandemic began, with over 9,400 deaths — a toll one-fourth of Britain's or Italy's virus deaths.

Frank Jordans and Geir Moulson contributed to this story.