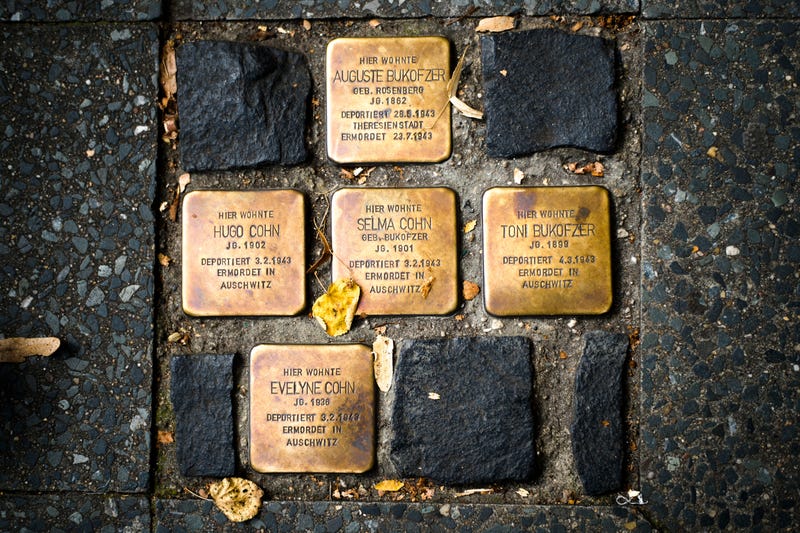 Photo credit So called stumbling blocks, marking the last voluntarily chosen places of residence of the victims of the Nazis, are embedded in the pavement in Berlin, Germany, Wednesday, Sept. 9, 2020. The Department for Research and Information on Anti-Semitism Berlin, or RIAS documented 410 incidents in Berlin, more than two a day, in the first half of 2020, including physical attacks, property damage, threats, harmful behavior and anti-Semitic propaganda. (AP Photo/Markus Schreiber)
By The Associated Press

BERLIN (AP) — Small square brass plates set in the pavement remember Jewish residents of Berlin's Lichtenberg district who were torn from their homes and killed by the Nazis decades ago. Nearby, the charred remains of a Jewish-run bar destroyed by arson last month attest to a hatred that still burns among far-right extremists.

The attack on the bar named Morgen Wird Besser, which in English means Tomorrow Will Be Better, underscores the findings of a victim support group that anti-Semitism remains in Germany's capital 75 years after World War II ended.

In a report released Tuesday, the Department for Research and Information on Anti-Semitism Berlin, or RIAS, documented 410 incidents — more than two a day — during the first half of 2020. The group's count of anti-Semitic acts included six physical attacks, 25 cases of property damage, 20 threats, 58 examples of anti-Semitic propaganda and 301 examples of malicious behavior such as giving the stiff-armed Nazi salute.

The report's publication comes amid nationwide concerns that intensified in October 2019 after an armed man tried to force his way into a synagogue in central German city of Halle on Judaism’s holiest day, Yom Kippur, then fatally shot two people nearby. The suspect posted an anti-Jewish screed online before the attack.

“ It is a disgrace, and it shames me deeply,” Merkel said.

A national report issued in May showed anti-Semitic crimes in Germany last year reached their highest level since the country started keeping records.

The Interior Ministry reported a 13% increase in anti-Semitic crimes to 2,032, more than 93% of which were attributed to the far right. Anti-Muslim crimes also rose 4.4% to 950, more than 90% of them committed by alleged far-right perpetrators.

The report Tuesday highlights recent cases in Berlin. Graves were desecrated at a Jewish cemetery in Pankow, a borough where a man also interrupted a woman speaking Hebrew on her phone with a Nazi salute and a shout of “Heil Hitler!”

The words “Jew! Hate! J.H.” were sprayed outside a Jewish-owned business in Charlottenburg-Wilmersdorf and a swastika was etched into the glass of a restaurant in Schöneberg. In Kreuzberg, 10 “Stolpersteine” — brass memorial plates like the ones near the Lichtenberg bar — were painted black.

“Despite the massive restrictions on public life to contain the COVID-19 pandemic since March 17, the number of anti-Semitic incidences was just under the level for the first half of 2019,” said RIAS, which documented 458 incidents for the same period last year.

The head of Germany’s Central Council of Jews, said the pandemic is acting as a “catalyzer,” with anti-Semitic conspiracy theories circulating online. RIAS documented incidences of protesters wearing Stars of David, the yellow badges persecuted Jews were forced to wear under Nazi rule, at demonstrations against anti-virus measures.

Levi Salomon, of the Jewish Forum for Democracy and Against Anti-Semitism, told The Associated Press the problem has been growing for a long time and has become a “huge, huge” issue — not only in Berlin.

“I’ve been observing right-wing extremism for more than 20 years across the whole country, and the situation has become far worse than it was 20 years ago,” Salomon said.

The owner of the bar in Lichtenberg, for example, had been receiving threats since he first opened a Jewish restaurant in the area in 2012. He later converted it to a bar.

He declined to speak with the AP for fear of attracting more attention but told Salomon’s group that neo-Nazis entered his bar and smashed bottles in early 2019. The year before, he said, they insulted him as a “dirty Jew” and said they would drive him out of the premises. Anti-Semitic slogans were scrawled outside the pub.

The latest threat came the Monday before the arson, when an anonymous caller told the bar owner he wasn’t wanted in the neighborhood. Someone then smashed a window and set a couch inside on fire, leading to the almost complete destruction of the bar on Aug. 14.

A crude Star of David also was scratched into the door, as were the numbers 2 and 8, an apparent reference to the “Blood and Honor” neo-Nazi network, the owner reported.

Lichtenberg has “a very active right-wing/far-right scene, which had been very much aware of the fact that the owner of this bar was Jewish,” RIAS researcher Alexander Rasumny said.

His group has also tracked threats against individuals involved in fighting anti-Semitism. The mayor of Lichtenberg reported being on an “enemy list” drawn up by right-wing extremists. A prominent Turkish-born local politician said she received threats from neo-Nazis.

However, hundreds of residents and others rallied against anti-Semitism outside the bar shortly after the fire. Some held signs with slogans such as “No place for Nazis!” and “No place for extremism.”

But Seehofer has resisted calls for a study on police racism after multiple incidents in the last year involving extremism among officers.

Calls for such a study grew stronger last week after more than two dozen officers in western Germany were suspended on suspicion of sharing far-right propaganda in WhatsApp groups. Officials said the chats contained “the most foul and repugnant neo-Nazi, racist and anti-refugee agitation.”

In response to the concerns in Berlin, the state prosecutors’ office this month announced a new department focused on hate crimes.

Prosecutor Ines Karl, who will head the department, said it will open direct contacts with victim and support groups, provide more transparency of police work and win back trust in the justice system. No additional staff are being hired, however.

The Jewish Forum for Democracy and Against Anti-Semitism's Salomon said more investment is needed to help fight anti-Semitism.

“As long as that doesn’t happen, we’re going to really have problems,” Salomon said.

Follow all AP stories on racial injustice at https://apnews.com/Racialinjustice.