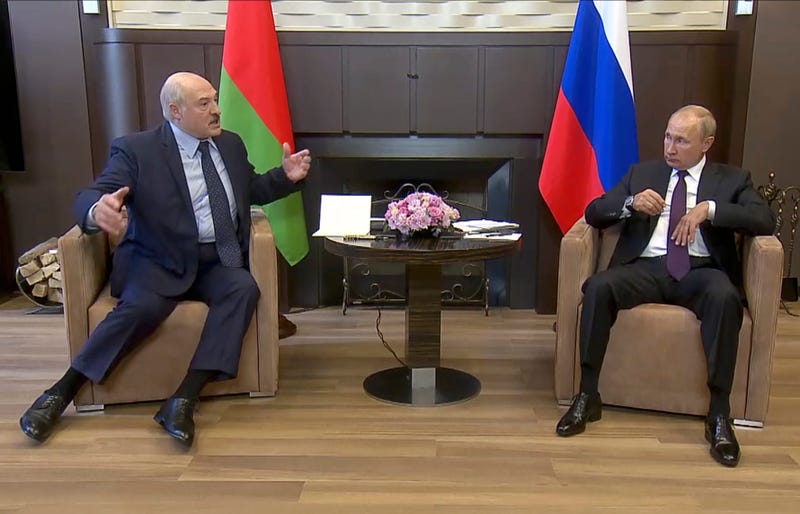 Photo credit In this photo taken from video and released by Russian Presidential Press Service, Russian President Vladimir Putin, right, and Belarusian President Alexander Lukashenko talk during their meeting in the Bocharov Ruchei residence in the Black Sea resort of Sochi, Russia, Monday, Sept. 14, 2020. Belarus' authoritarian president is visiting Russia in a bid to secure more loans and political support as demonstrations against the extension of his 26-year rule enter their sixth week. Alexander Lukashenko's talks Monday with Russian President Vladimir Putin in the Black Sea resort of Sochi come a day after an estimated 150,000 flooded the streets of the Belarusian capital, demanding Lukashenko's resignation. (Russian Presidential Press Service via AP)
By The Associated Press

MOSCOW (AP) — The Kremlin said Tuesday that a $1.5 billion loan it offered to Belarus carried no political conditions, despite claims by the Belarusian opposition that Russia is trying to shore up the nation's authoritarian ruler amid post-election protests.

Russian President Vladimir Putin announced the loan when he hosted his Belarusian counterpart Alexander Lukashenko for more than four hours of talks Monday in Sochi on Russia's Black Sea coast.

Kremlin spokesman Dmitry Peskov said the loan wasn't contingent on any political moves. “Like any loan, it has commercial conditions but there was no talk about any other conditions,” he told reporters during a conference call Tuesday.

Protesters in Belarus have dismissed Lukashenko’s re-election for a sixth term in the Aug. 9 presidential vote as rigged, and massive demonstrations have entered their sixth week. The United States and the European Union have both criticized the election as neither free nor fair and urged the Belarusian leader to engage in talks with the opposition, a demand he has rejected.

The Western pressure has left Lukashenko to rely exclusively on assistance from Russia, which has a union agreement with Belarus envisaging close political, economic and military ties. Putin quickly congratulated Lukashenko on his re-election and promised to send Russian police to Belarus if protests there turn violent.

Peskov said after Monday's talks that Russia would now pull back from the border a law enforcement contingent set aside for possible deployment to Belarus.

Despite the close cooperation, the two neighbors often engaged in acrimonious disputes in the past, with Lukashenko denouncing what he described as Kremlin pressure on Belarus to abandon its independence.

In a shift of rhetoric, Lukashenko on Monday showered Putin with praise for helping Belarus and emphasizing the need to counter what he described as hostile plans by NATO. He offered to intensify joint military drills, noting that “the recent developments have shown that we need to stand closer to our older brother.”

Putin emphasized that Russian paratroopers sent to Belarus for joint drills will leave the country after the exercise. Peskov said the leaders did not discuss the possibility of basing Russian troops in Belarus.

The Coordination Council that the Belarusian opposition created after the vote to push for a new election criticized Russia for backing Lukashenko.

“Support for the actions of Belarus' law enforcement agencies, for the policy of repression instead of dialogue, will undoubtedly have a serious negative impact on bilateral relations,” it said in a statement.

Pavel Latushko, a former culture minister and ambassador to France who was forced to leave Belarus after joining the Coordination Council, said the Kremlin is making a mistake by trying to shore up Lukashenko.

“It's a wrong strategy to offer a financial lifeline to the outgoing government that will be wasted,” Latushko told The Associated Press in a phone interview from Poland. “Russia offers funds to Lukashenko, but it can't put money in every Belarusian's pocket. The economic situation will deteriorate and the public discontent will only grow.”

Latushko charged that despite backing Lukashenko for now, the Kremlin may already have started a search for his replacement.

“Russia is implementing a strategy to downgrade the outgoing president to help shape broad public consensus for replacing Lukashenko in the near future,” he said.

Most observers noted that Russia would stand by Lukashenko until it could find a viable alternative.

“If Belarusian officials and the broad public feel that Russia dropped its support for Lukashenko, it would quickly finish his regime,” said Artem Shraibman, an independent Minsk-based analyst. “The Kremlin doesn't want him to fall until it has other reliable partners in the Belarusian elite or the opposition.”

Follow all AP stories about the turmoil in Belarus at https://apnews.com/Belarus.