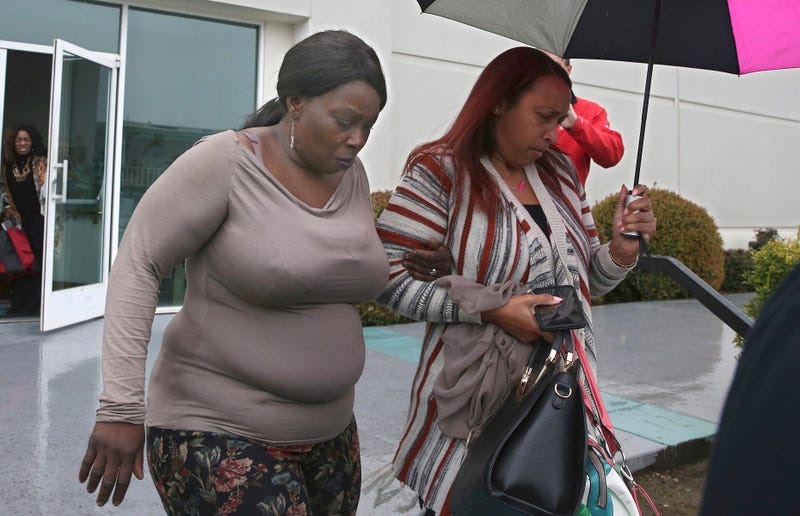 Photo credit FILE - In this March 5, 2019, file photo, Sequette Clark, left, leaves the Calvary Christian Center after meeting with California Attorney General Xavier Becerra in Sacramento, Calif. California prosecutors on Tuesday, Aug. 4, 2020, asked the NFL to remove a video produced as part of the league's Inspire Change campaign, saying it misrepresents the circumstances leading to the fatal shooting of an unarmed Black man in 2018. The video shows Sequette Clark speaking about the death of her son, Stephon Clark, a vandalism suspect who was killed in the backyard of his grandparents' home after a chase by Sacramento police. (AP Photo/Rich Pedroncelli, File)
By The Associated Press

SACRAMENTO, Calif. (AP) — California prosecutors on Tuesday asked the NFL to remove a video produced as part of the league's Inspire Change campaign, saying it misrepresents the circumstances leading to the fatal shooting of a Black man in 2018.

The video shows Sequette Clark speaking about the death of her son, Stephon Clark, who was killed in the backyard of his grandparents’ home. The shooting led to weeks of protests in Sacramento and across the nation, sometimes disrupting games by the NBA's Sacramento Kings.

“Though well-intentioned, the video performs a disservice instead of a public service by omitting the crucial facts which preceded Mr. Clark’s tragic death,” California District Attorneys Association president Vern Pierson said in a statement.

Among other things, the video doesn't mention that he was suspected of vandalism and was running from police, he noted. Clark turned toward them holding what the two officers said they thought was a gun, but it was a cellphone.

NFL officials did not immediately respond to requests for comment.

Attorney Brian Panish, who represented Sequette Clark and other family members in a lawsuit against the city, also did not immediately respond to requests for comment.

“My family will never be the same without Stephon,” she says in the video.

But she applauded a new California law that attempts to deter shootings by police by setting a higher standard for when officers can use lethal force.

“That’s the ultimate goal, to make change,” she says.

The association said in a letter Tuesday to NFL Commissioner Roger Goodell that it applauds the league's Inspire Change initiative, which provides grants to nonprofit organizations and showcases players' community involvement. The grants focus in part on promoting police and community relations and criminal justice reform, according to the league.

The video entitled Stephon Clark’s Legacy ' #EveryonesChild poignantly shows his mother's loss and pride in her son, Pierson wrote on behalf of the association.

But he said it omits some of the background and crucial context, including that both the Sacramento County district attorney and state attorney general ultimately determined that the two officers broke no laws during the confrontation.

The letter asks Goodell to “reexamine the factual findings of Stephon Clark’s death and produce a video that accurately depicts the conduct of all concerned in an officer involved shooting.”