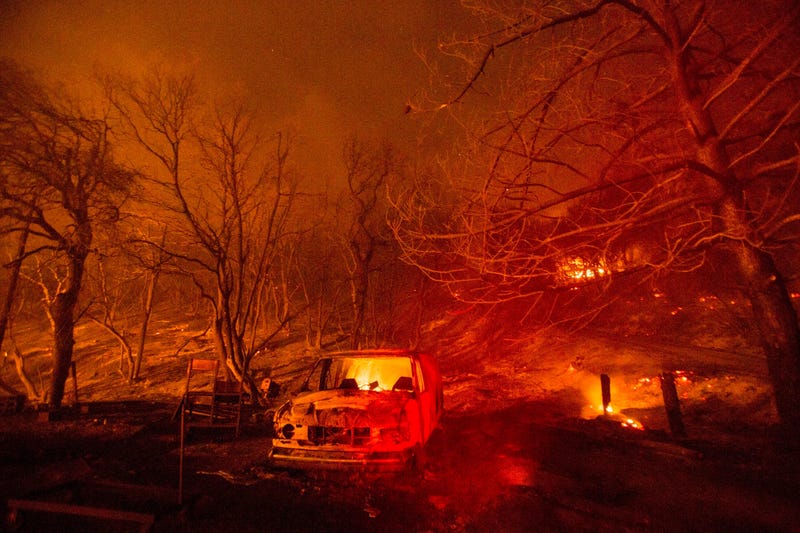 Photo credit FILE - In this Aug. 13, 2020, file photo, a burned vehicle is seen in the Lake Hughes Fire in Angeles National Forest on Thursday, Aug. 13, 2020, north of Santa Clarita, Calif. A huge forest fire that prompted evacuations north of Los Angeles flared up around noon Saturday, Aug. 15, sending up a cloud of smoke as it headed toward thick, dry brush in the Angeles National Forest. Evacuation orders remain in effect for the western Antelope Valley because erratic winds in the forecast could push the fire toward homes. (AP Photo/Ringo H.W. Chiu, File)
By The Associated Press

LOS ANGELES (AP) — Firefighters struggled to contain three wildfires near Los Angeles on Saturday as forecasters warned that the risk of new fires was high with temperatures expected to spike and humidity levels to drop across California.

In Northern California, the National Weather Service warned responders to beware of a rare fire tornado.

A huge forest fire that prompted evacuations north of Los Angeles flared up around noon, sending up a cloud of smoke as it headed toward thick, dry brush in the Angeles National Forest. Although it was burning into forest land, evacuation orders remained in effect for the western Antelope Valley because erratic winds in the forecast could push the fire toward homes, fire spokesman Jake Miller said.

Fire crews managed to stop the fire's movement down to the desert floor when it flared up Friday afternoon. In one dramatic moment, several firefighters ran to safety when a longhorn bull that was apparently escaping the blaze charged at them.

The Lake Fire was just 12% contained as of Saturday morning, and after threatening more than 5,400 homes, it had charred more than 23 square miles (59.5 square kilometers) of brush and trees. Fire officials said 21 buildings had been destroyed, including at least five homes.

Firefighters were struggling in steep, rugged terrain amid scorching temperatures. The National Weather Service warned temperatures could hit 111 degrees (44 Celsius) in the Antelope Valley Saturday, and winds gusting 15-20 mph (24-32 kph) was expected later in the afternoon.

“In addition to that, we have a very unstable air mass over the Lake Fire that’s going to allow for a pyrocumulus (cloud) development later today so that will create extreme fire behavior,” meteorologist Matt Mehle said.

Many areas of the state saw record-breaking heat through the weekend, with triple-digit temperatures and unhealthy air predicted for many parts of the state. There also was a chance of isolated thunderstorms worsening the fire threat by creating dry lightning and strong downdrafts, fire officials said.

There was also no containment of a blaze that blackened foothills above the Los Angeles suburb of Azusa. It churned through 2.3 square miles (5.96 square kilometers) of brush on Thursday and was moving away from homes. Evacuation orders issued to residents were lifted early Friday.

Azusa police said they were looking for a homeless man suspected of starting the fire. He was identified as Osmin Palencia, 36, and was last known to be living in a riverbed encampment near the site where the fire started.

Police said Palencia was believed to be violent and urged people to use caution if they see him.

Another blaze came dangerously close to a neighborhood in the city of Corona, east of Los Angeles, before crews controlled it. And a Northern California fire in the community of Sloughhouse, near Sacramento, burned about 500 acres (202 hectares) before firefighters stopped its forward spread.