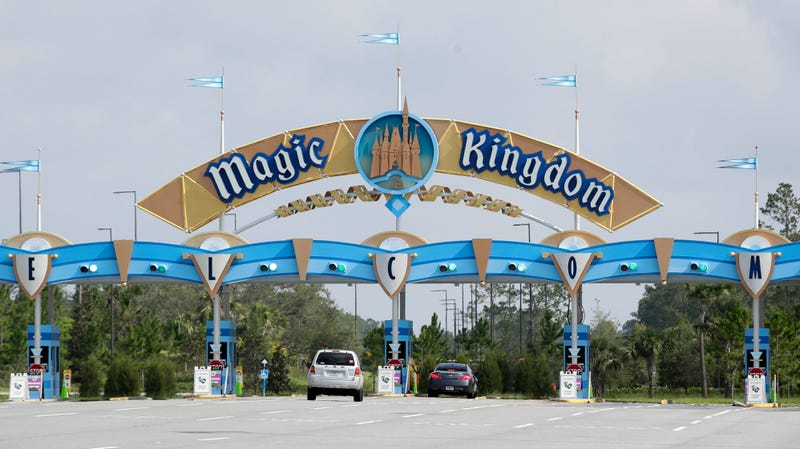 Photo credit FILE - Park guests enter the Magic Kingdom during the reopening of Walt Disney World, Saturday, July 11, 2020, in Lake Buena Vista, Fla. Walt Disney Co. reported net income that plummeted dramatically in the third quarter, when it most of its theme parks remained closed and theatrical movie releases were postponed. Net income results were better than the loss analysts expected, however, but revenue missed expectations. (AP Photo/John Raoux)
By The Associated Press

BURBANK, Calif. (AP) — Walt Disney Co. on Tuesday reported that its net income plummeted dramatically in the three-month period that ended in June when it most of its theme parks were shuttered and theatrical movie releases were postponed.

Still, its bottom-line results were better than analysts expected, although its revenue missed expectations.

Disney has soared to success with the breadth of its media and entertainment offerings, but now it's trying to recover after the coronavirus pandemic pummeled many of its businesses. It was hit by several months of its parks and stores being closed, cruise ships idled, movie releases postponed and a halt in film and video production.

For quarter that ended June 27, the company posted a loss of $4.84 billion, or $2.61 per share, compared to a profit of 79 cents in the prior year quarter. Adjusted to exclude one-time items such as restructuring costs and impairment charges, it net income came to 8 cents per share. Analysts expected an adjusted loss of 64 cents per share, according to FactSet.

Disney has been opening its parks back up around the globe, but most were still shuttered during the company's fiscal third quarter.

In May, it opened Disney Springs, a complex of shops, restaurants and entertainment venues in Lake Buena Vista, Florida. Hong Kong Disneyland reopened in June, but closed again after a month due to an outbreak in the city. It reopened Walt Disney World’s Magic Kingdom and Animal Kingdom, Epcot and Disney’s Hollywood Studios in Orlando, Florida, in July.

Disney said closing its parks cost it $3.5 billion during the quarter.

The streaming service Disney Plus continued to be a bright spot.

Disney reported Disney Plus, which costs $7 a month, had 57.5 million paid subscribers as of June 27. On a call with analysts, CEO Bob Chapek said that number reached 60.5 million as of Monday. The service debuted in November in the U.S. and rolled out to the UK and other parts of Europe last month. Disney Plus, Hulu and ESPN Plus combined reached over 100 million subscribers, the company said.

Netflix, by contrast, has about 183 million subscribers, a base it has spent years building.