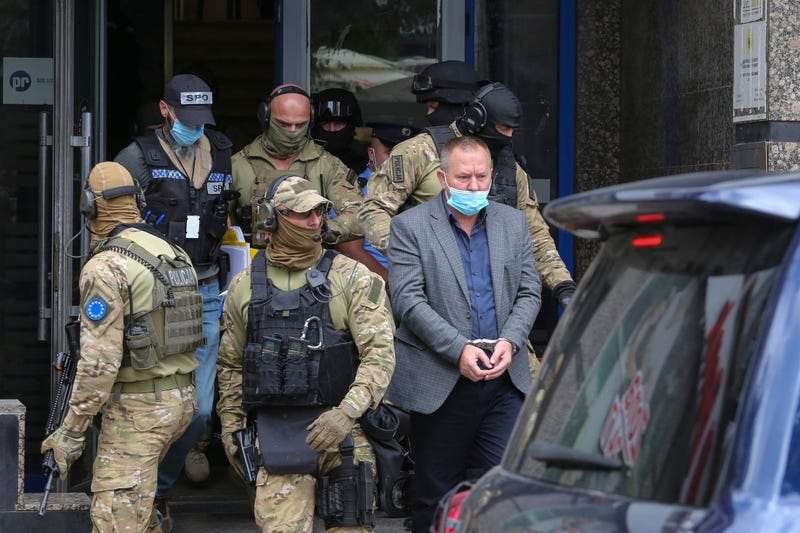 Photo credit Hysni Gucati, the head of the War Veterans Organization of the Kosovo Liberation Army is escorted by European Union security police officers, from the offices of a war veterans association in Kosovo, in Pristina, Friday, Sept. 25, 2020. Witnesses say European Union security police have stormed the offices of a war veterans association in Kosovo. The association represents the former ethnic Albanian separatists who fought Serbian troops in a 1998-1999 war for independence. Members of the group said police from the European Union Rule of Law Mission in Kosovo, or EULEX, prevented them from going into the association’s offices in Pristina on Friday. (AP Photo/Visar Kryeziu)
By The Associated Press

PRISTINA, Kosovo (AP) — European Union security police stormed the offices of a war veterans association in Kosovo on Friday, apparently to get hold of international prosecutors' files from a war crimes investigation that the association said it received anonymously, according to witnesses and veterans.

Members of the veterans’ association, which represents the former ethnic Albanian separatists who fought Serbian troops in a 1998-1999 war for independence, said police from the European Union Rule of Law Mission in Kosovo, or EULEX, prevented them from going into the association's offices.

Attorney Tome Gashi said EULEX police arrested the association’s leader, Hysni Gucati, and that he would be transferred to The Hague, where a special court is probing alleged crimes by Kosovo Liberation Army members during and after the Balkan nation’s war.

Police also arrested the deputy head of the association, Nasim Haradinaj. Before the arrest, he led a meeting of the association’s leadership at a bar in front of the office, which remained under police control.

“We are against such a court. Full stop,” Haradinaj told journalists, calling on Kosovo's government and parliament to react.

Neither EULEX nor the court in The Hague responded to requests for comment on the police operation.

The court's prosecutors were seen leaving the association's office after eight hours, taking files and computers with them.

Earlier this week, the war veterans group said that for the third time in two months an unknown person had provided war crime files from The Hague investigation. The veterans said they would make the files public.

Christopher Bennett, spokesman of the Specialist Prosecutor’s Office at the Kosovo Specialist Chambers, said that releasing the documents would be “undermining the proper administration of justice” and a criminal act.

Former Prime Minister Ramush Haradinaj, an ex-commander in the Kosovo Liberation Army, wrote on Facebook that “there is no reason for operations or storming because everyone will respond voluntarily to justice.”

Haradinaj himself was twice prosecuted and acquitted in another international war crimes court in The Hague. He resigned as prime minister last year when the Kosovo Specialist Chambers called him in for questioning.

The Kosovo Specialist Chambers is looking into allegations that Kosovo Liberation Army members committed war crimes and crimes against humanity.

On Thursday, The Hague-based court arrested a former KLA commander on charges including torture of detainees and the murder of one prisoner held at a compound in Kosovo. He was taken to the court’s detention center in Netherlands.

Kosovar President Hashim Thaci, former parliamentary speaker Kadri Veseli and others have been charged with crimes against humanity and war crimes, including murder, enforced disappearances, persecution and torture. Both men have denied committing any crimes.

A pretrial judge hasn’t made a decision on whether to proceed with their case.

Thaci said there was no need for spectacular actions because no potential suspect would escape justice. Leaking of the war crime files “has damaged the image of the Kosovo state and the rights of the potential defendant,” he said.

“The whole world knows that Kosovo is a victim. The KLA and the entire Kosovar people faced genocide and ethnic cleansing,” he said in a statement.

The 1998-1999 war for Kosovo’s independence from Serbia left more than 10,000 people dead — most of them ethnic Albanians from Kosovo, and more than 1,600 people remain unaccounted for. The fighting ended after a 78-day NATO air campaign against Serbian troops.