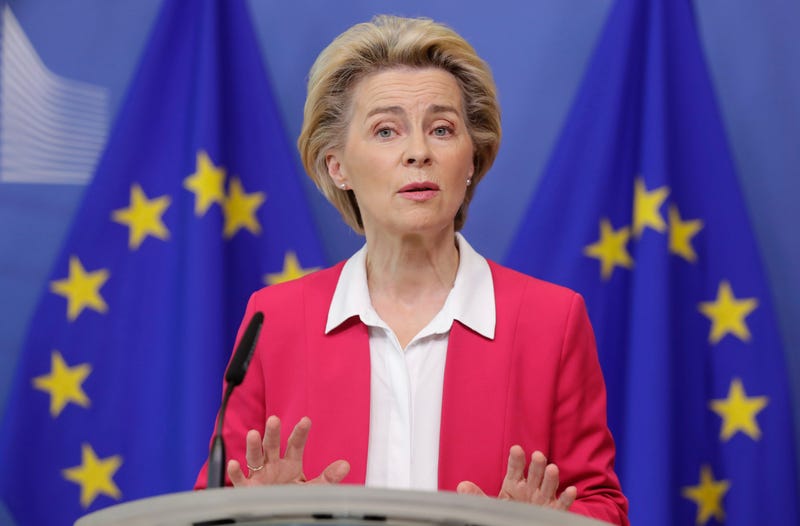 The move comes after years of chaos and dispute among the bloc's 27 nations over the handling of migrants and refugees amid a recognition that the current EU system for deciding whether they should receive protection or be sent home has failed.

“The old system to deal with it in Europe no longer works,” European Commission President Ursula von der Leyen told reporters in Brussels, adding that the “New Pact for Migration and Asylum” offers Europe “a fresh start.”

The arrival in 2015 of well over 1 million migrants, mostly refugees fleeing war in Syria, sparked one of the EU’s biggest political crises. EU nations have fought since over who should take responsibility for the migrants, with front-line Mediterranean nations like Greece, Italy, Malta and Spain demanding more help from their EU neighbors.

The arguments rage on even though the number of unauthorized migrants has dwindled sharply in recent years. Some 140,000 people arrived last year, compared to around 2 million migrants who entered legally, the European Commission says. Turkey, Lebanon and Jordan have had to cater to far more.

EU nations have responded in various ways, from erecting razor-wire border fences to ignoring emergency calls from overcrowded smugglers' boats in the Mediterranean. Some migrants have been left to languish on ships for weeks rather than being allowed into safe harbors. Aid groups and European citizens face criminal charges for their efforts to save lives.

The new plan hinges on the fast-track screening of migrants arriving at Europe’s borders without permission. It would be completed within 5 days. People would then be sent into an asylum track if they qualify for protection, or they would be prepared for deportation. Both procedures would take 12 weeks and the migrants could be held in detention.

From there, EU members could choose to help ease the load on countries that have seen the most migrant arrivals by sea — like Greece, Italy, Malta and Spain — by taking in some refugees or providing other support.

Those not willing to do that could take charge of deporting people whose applications are refused. This option might suit Austria, the Czech Republic, Hungary, Poland and Slovakia, who are all reluctant to accept refugees.

Hanne Beirens, Director of Migration Policy Institute Europe, said this option allows countries with anti-migrant governments to become “the bouncers of Europe” but she raised concerns about the legal status of people in the process.

“Those put in a border procedure, it will be as if they have never entered EU territory,” she said. That legal limbo allows authorities to quickly put people on a plane or a boat home.

The catch is that the plan involves “flexible forms of support, starting off on a voluntary basis.” Stricter requirements to help out would only be imposed in crisis situations like Greece saw in 2015, when hundreds of thousands of Syrian refugees made the short — but sometimes deadly — journey across from Turkey.

EU Migration Commissioner Ylva Johansson ruled out the use of mandatory quotas for sharing migrants. When asked whether more effort would be made to save people in the Mediterranean, she said: “Not according to our proposal. It will be the opposite, I guess.”

Johansson said this, combined with swift screening and return procedures, should make people “think twice before paying a lot of money to the smugglers and before risking their lives going into these very dangerous boats.”

The proposals suggest the EU will continue holding unauthorized migrants in the Greek islands until they can be sent away. Earlier this month, a blaze destroyed the squalid Moria refugee camp on the Greek island of Lesbos, where over 12,000 people lived in facilities built for 3,000.

Von der Leyen said the EU has agreed to set up a joint pilot project with Greek authorities to manage an immigrant reception center on Lesbos.

Outsourcing will remain a key pillar of EU migration policy, with the bloc building partnerships with African and Mideast countries to help stop people from leaving. Those countries that do not take back their citizens could find it more difficult to secure European visas.

The migration proposals are sure to spark heated debate among EU countries but the commission is urging them, and the bloc’s parliament, to adopt the reforms by year's end.

“This is a first step today in the right direction. We will see how the different member states react,” Greek government spokesman Stelios Petsas told state-run ERT television. “There is no room for countries seeking to opt out. It is a major European issue and not just a problem for host countries.”

German Interior Minister Horst Seehofer called the commission proposal a “good basis” to work on and said it would be discussed by EU interior ministers on Oct. 8.

Geir Moulson and Frank Jordans in Berlin, Karel Janicek in Prague and Derek Gatopoulos in Athens contributed to this report.