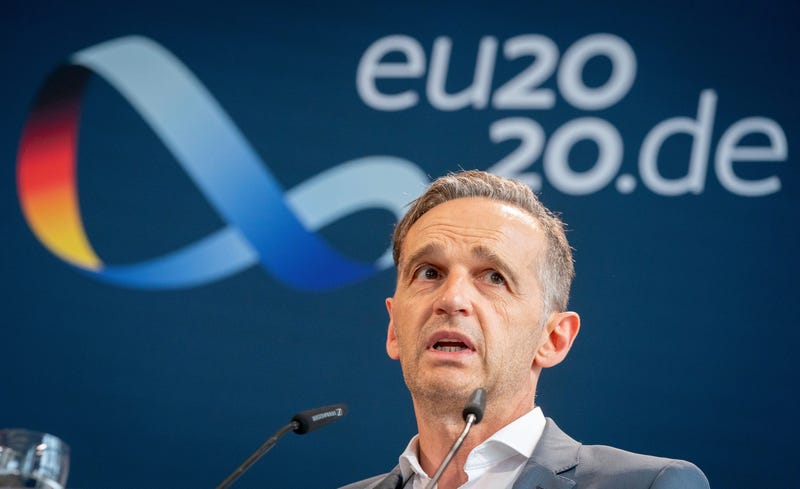 Photo credit German Foreign Minister Heiko Maas holds a press conference following the informal talks of the EU Foreign Ministers in Berlin, Germany, Friday, Aug. 28, 2020. The topics of the so-called Gymnich meeting included developments in Belarus and the dispute over natural gas in the eastern Mediterranean between Turkey and the EU states of Greece and Cyprus. (Kay Nietfeld/dpa via AP)
By The Associated Press

BERLIN (AP) — The European Union on Friday urged Turkey to halt what it called its “illegal” prospecting activities in contested waters in the eastern Mediterranean and ordered EU officials to speed up work aimed at blacklisting Turkish officials linked to the energy exploration.

Tensions are mounting between Turkey and Greece over Turkey’s searching for potential gas and oil deposits near the island of Cyprus, which like Greece is an EU member country. Turkish and Greek armed forces have been conducting war games in the area.

Referring to what he called “growing frustration” with Turkey, EU foreign policy chief Josep Borrell said the sanctions — which include asset freezes and travel ban — could be extended, with Turkish vessels being deprived access to European ports, supplies and equipment. Economic sanctions are also a possibility.

EU leaders will discuss whether to impose the additional measures at a summit in Brussels on Sept 24-25 should Turkey fail to stop what the Europeans consider to be “illegal activities” in the eastern Mediterranean. But Turkey said the EU was only making matters worse by brandishing sanctions and it vowed to defend its rights.

“Turkey has to abstain from unilateral actions. This is a basic element to allow the dialogue to advance,” Borrell told reporters in Berlin after a meeting of EU foreign ministers.

He said the EU is keen to establish a “healthier relationship” with Turkey, which is a candidate for membership in the 27-nation bloc, although its accession talks are virtually frozen.

“We must walk a fine line between preserving a true space for dialogue and at the same time showing collective strength in the defense of our common interests,” Borrell said.

Turkey doesn’t recognize the divided island of Cyprus as a state and claims 44% of Cyprus’ exclusive economic zone as its own, according to government officials in Cyprus. Turkish Cypriots in the east Mediterranean island nation’s breakaway north claim another 25%.

The Cypriot government has prepared a list of Turkish officials that it believes should face sanctions.

Cyprus was split along ethnic lines in 1974 when Turkey invaded in the wake of a coup by supporters of union with Greece. A Turkish Cypriot declaration of independence is recognized only by Turkey, which keeps more than 35,000 troops in the breakaway north.

Greek Foreign Minister Nikos Dendias said he was satisfied because “Greece won the unanimous support of all its partners,” and because EU leaders will weigh action against Turkey in a few weeks “if there has been no de-escalation by the Turkish side and dialogue by then.”

Beyond individual sanctions, steps discussed include measures hitting the sale, purchase and export of material related to energy research, the transfer of technology and products. Should those fail, Turkey's banking and industrial sector could be hit. EU funds could also be cut.

But it’s unclear whether sanctions might slow Turkey down. And Europe still needs a good working relationship with Turkey, which like most EU countries is a member of NATO and also plays a military role in Libya, a jumping-off point for would-be migrants to Europe.

Turkish President Recep Tayyip Erdogan has shown his willingness to encourage migrants and refugees from Syria to cross the border into Greece and on to Europe, which saw over 1 million people arrive in 2015, to ensure that his demands are considered.

On Friday, Erdogan spoke on the phone with NATO Secretary General Jens Stoltenberg, and conveyed Turkey’s “determination to protect its rights and interests.”

The Turkish president's office quoted him as saying that Ankara favors dialogue and a fair solution.

Greece, France, Italy and Cyprus on Friday wrapped up a 3-day sea and air exercise off Cyprus.

Turkey's Defense Ministry said Friday its air force prevented Greek fighters flying to Cyprus for the exercise from approaching an area of the eastern Mediterranean that Turkey had declared off-limits. Greek media had said the Greek fighters flew to Cyprus unhindered, and Turkish fighters trying to harass them on the way back were chased off.

The two countries' fighter pilots engaged frequently in simulated dogfights over the Aegean Sea even before the current tension.