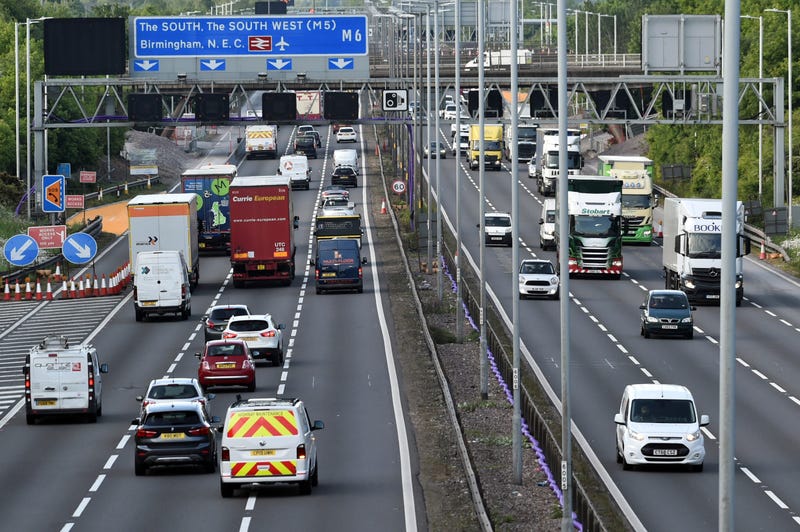 Photo credit FILE - In this file photo dated Monday, May 18, 2020, traffic moves along the M6 motorway near Birmingham, England. Trade associations representing British freight haulers and storage companies are asking for urgent talks with government leaders to allay concerns over preparations for Brexit, that may threaten supplies of critical goods caused by border controls and computer systems. (AP Photo/Rui Vieira, FILE)
By The Associated Press

BRUSSELS (AP) — The European Union warned the British government on Monday that any attempt to renege on commitments made ahead of its departure from the bloc earlier this year could put at risk the hard-won peace in Northern Ireland.

The comments show growing signs that trust between the two sides is evaporating ahead of another round of Brexit trade talks Tuesday in London. Britain left the bloc on Jan. 31 but the two sides are in a transition period that ends at the end of this year and are negotiating their future trade ties.

The 27-nation bloc said any attempt by Britain's Conservative government to unilaterally ride roughshod over its divorce agreement with the EU could also jeopardize the prospects for a trade deal.

Ursula von der Leyen, president of the EU's Executive Commission, said she expects British Prime Minister Boris Johnson's government to implement the withdrawal agreement that paved the way for the U.K.'s smooth departure from the bloc. She said in a tweet that the agreement is an “obligation under international law” and a “prerequisite for any future partnership.”

She added the section in the agreement that ensures an open border between Northern Ireland, which is part of the U.K., and EU member Ireland, is “essential to protect peace and stability on the island."

Her comments followed a report in the Financial Times newspaper that the British government is planning domestic legislation that would effectively override the international treaty obligations enshrined in the Brexit withdrawal agreement, particularly over issues related to the Irish border.

Johnson has said Britain could walk away from the talks within weeks and insists that a no-deal exit would be a “good outcome for the U.K.” He said in a statement that any agreement must be sealed by an EU summit scheduled for Oct. 15.

The EU has previously said negotiations must conclude before the end of October.

Monday's developments prompted widespread selling of the British pound as traders priced in a growing likelihood that the trade talks could be heading for collapse. The pound was down 0.9% against both the dollar and the euro.

During this transition period, the U.K. remains within the EU’s economic orbit, benefiting from frictionless and tariff-free trade. But British businesses are worried about the uncertainty of what happens to their trading ties with their biggest market beginning Jan. 1.

The EU's chief negotiator in the talks, Michel Barnier, said Monday that he will be seeking clarification from David Frost, his counterpart in the U.K., on Tuesday “to better understand the government’s intentions.”

“This protocol is a condition for preserving peace and for protecting the integrity of the single market,” Barnier told French radio France Inter. “It’s also a pre-condition for confidence between us because everything that has been signed in the past must be respected.”

Britain's environment secretary, George Eustice, sought to downplay concerns that the government is seeking to tear up its treaty obligations. He argued that the Internal Market Bill, due to be published Wednesday, aims to to tie up some “loose ends” where there was a need for “legal certainty."

He insisted that Johnson's government remained committed to the principles of the deal, which will see customs checks on some goods moving from the rest of the U.K. to Northern Ireland.

“What we are talking about here is what type of administrative customs processes you might have for goods that might be at risk of entering the EU single market,” he told BBC radio.

James Slack, the prime minister's spokesman, also insisted that the government remains “fully committed” to the Brexit withdrawal agreement and that this week's legislation is intended to clear up “ambiguity” and avoid “unintended consequences” in the complex border agreement.

If the U.K. to walk away from the talks, the two sides would be heading toward a no-deal outcome that would see tariffs and other impediments to trade imposed at the start of the year.

Kallum Pickering, senior economist at Berenberg Bank, said in that situation the costs would fall “disproportionately” on the U.K., potentially tipping it back into recession in early 2021, while temporarily slowing the EU recovery.

“For the U.K. and the EU to find compromises on the sticking points, both sides must work to build trust,” he said. “The U.K.’s actions are doing the opposite.”

The trade discussions have made very little progress over the summer, with the two sides seemingly wide apart on several issues, notably on business regulations, the extent to which the U.K. can support certain industries and over the EU's fishing rights access to British waters.

The German government said a deal was still possible and that it’s in the interest of both sides to secure one.

“For this, Britain in particular needs to move on the core issues of governance, what’s summed up as ‘level playing field,’ and on the issue of fisheries,” said German government spokesman Steffen Seibert.

Follow all AP stories about Brexit and British politics at https://apnews.com/Brexit.