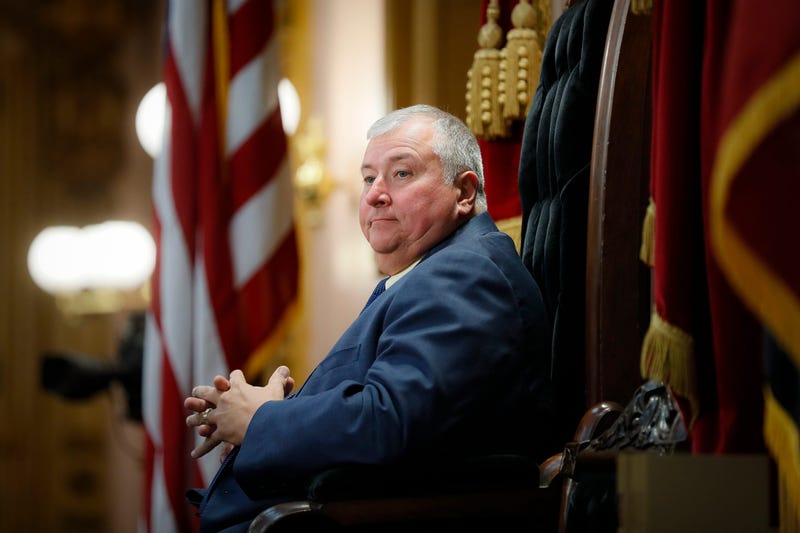 Photo credit FILE - Republican Ohio state Rep. Larry Householder sits at the head of a legislative session as Speaker of the House, in Columbus, Ohio, Wednesday, Oct. 30, 2019. Householder, who is accused in a $60 million federal bribery probe, was removed from his leadership position on July 30, 2020. (AP Photo/John Minchillo, File)
By The Associated Press

COLUMBUS, Ohio (AP) — The former speaker of the Ohio House pleaded not guilty Thursday to a federal corruption charge tied to an alleged $60 million bribery scheme.

Republican Rep. Larry Householder and four others are accused of shepherding $60 million in energy company money for personal and political use, in exchange for passing a legislative bailout of two nuclear power plants and then derailing an attempt to place a rejection of the bailout on the ballot.

Four defendants pleaded not guilty earlier this month to the charge that they conspired as part of what one defendant called an “unholy alliance” aimed at saving the aging plants.

Householder said Tuesday in his first public comments since a July indictment that he is innocent and expects to be exonerated. He entered his Thursday not guilty plea in a brief videoconference hearing before federal Magistrate Judge Stephanie Bowman.

A judge allowed Householder to delay court appearances on Aug. 6 and Aug. 20 to allow more time to find a new attorney. Householder's former attorney, Dave Thomas, dropped off the case because of a conflict of interest involving another client represented by his firm.

“We get hired when someone wants to go to trial,” Marein told the outlet Wednesday. “That’s what we are, trial lawyers. We’re not plea-bargain lawyers; we’re trial lawyers, and that’s what’s going to happen here.”

He declined to discuss details of the case.

This story has been updated to correct that Householder made his first public comments Tuesday, not Wednesday.