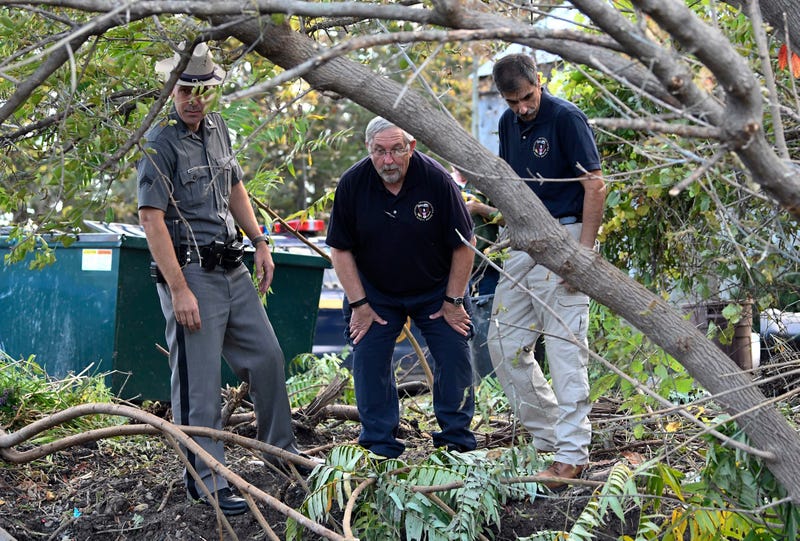 Photo credit FILE - In this Oct. 7, 2018, file photo, a New York state trooper and members of the National Transportation Safety Board view the scene of a fatal crash that killed 20 people in Schoharie, N.Y. Federal investigators examining the 2018 crash of a stretch limousine that killed 20 people said Tuesday, Sept. 29, 2020, that state regulators repeatedly failed to oversee a poorly maintained vehicle with corroded brakes. (AP Photo/Hans Pennink, File)
By The Associated Press

ALBANY, N.Y. (AP) — Federal investigators examining the 2018 crash of a stretch limousine that killed 20 people said Tuesday that state regulators repeatedly failed to properly oversee a poorly maintained vehicle with corroded brakes that hurtled down a road at more than 100 mph and slammed into an embankment.

National Transportation Safety Board members unanimously voted to accept a final report that found widespread fault. The NTSB found that the crash in upstate New York was likely caused by the operator’s “egregious disregard for safety” that resulted in brake failure on a long downhill stretch, and that ineffective state oversight also contributed.

The crash killed 17 family members and friends, including four sisters and three of their husbands, along with the driver and two bystanders outside a country store. It was the deadliest transportation disaster in the United States in a decade.

“Seventeen young people made the smart, safe decision to arrange for sober transportation when celebrating,” board member Michael Graham said during an online hearing. “They put their trust and safety into system designed to protect them, and it failed.”

A phone message seeking comment was left with the lawyer for the limousine operator, Prestige Limousine.

Staff members told the board that the limousine's brake system was corroded and that the brake line was crimped, which would have restricted amount of fluid able to flow to the right rear brake. In addition, parts of the line were coated in brake fluid, indicating a leak.

Staffers said properly functioning and well-maintained brakes would have been able to stop at the bottom of the hill. The NTSB last month released a cache of documents indicating Nauman Hussain, the operator of Prestige Limousine, repeatedly changed the listed number of seats in the 2001 Ford Excursion limo and took other steps to avoid safety regulations.

The two state agencies said they “exercised the full authority granted to us under the law and ordered that vehicle off the road multiple times.”

"But as NTSB’s own reports on this crash reaffirm, Prestige repeatedly violated New York State law and was never authorized at any time to operate for-hire commercial passenger vehicle service in the State,” according to a statement from transportation spokesperson Joe Morrissey and motor vehicle spokesperson Lisa Koumjian.

The ill-fated limousine had been rented to take a group of young friends and siblings to a 30th birthday celebration at a brewery near Cooperstown on Oct. 6, 2018. The vehicle’s brakes failed on a downhill stretch of a state route in Schoharie, 30 miles west of Albany. It blew through a stop sign at a T intersection and crashed into a culvert shortly before 2 p.m.

Hussain faces 20 charges each of manslaughter and criminally negligent homicide. He has pleaded not guilty and was scheduled to stand trial in May, but the trial was delayed because of the pandemic. His lawyers have been meeting with prosecutors to discuss a possible plea deal.

The NTSB last month released a cache of documents indicating Hussain repeatedly changed the listed number of seats in the 2001 Ford Excursion limo and took other steps to avoid safety regulations. In particular, Prestige took pains to avoid more stringent inspection rules intended to ensure a modified vehicle has the braking capacity and other requirements for carrying a heavier load, according to the NTSB documents.

Any vehicle with 15 or more seats is defined as a bus under state regulations and is subject to semi-annual inspections.

Thomas King, who lost four daughters in the crash, said he agreed that “all the parties dropped the ball.” Kevin Cushing, who lost his son, said as difficult as it was to read the NTSB report, it was good to see all the fact laid out.

“There’s certainly not any closure, by any stretch," Cushing said. "Does it reopen wounds? I’m not sure that the wounds have closed."

NTSB Chairperson Robert Sumwalt also criticized the local prosecutor and state police for failing to cooperate with the agency and delaying the completion of the investigation to almost two full years after the crash.

___ The headline on this story has been corrected to show that the NTSB faulted the operator, not the driver.