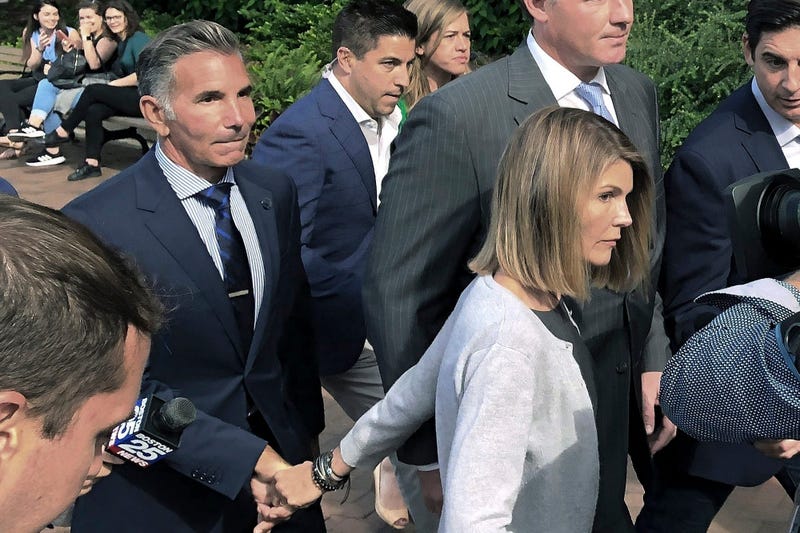 Photo credit FILE - In this Aug. 27, 2019, file photo, Lori Loughlin departs federal court in Boston with her husband, Mossimo Giannulli, left, after a hearing in a nationwide college admissions bribery scandal. In August 2020, the couple was sentenced to prison after pleading guilty for paying bribes to get their two daughters into the University of Southern California as rowing recruits. (AP Photo/Philip Marcelo, File)
By The Associated Press

One by one, they have admitted to using their wealth to bribe and cheat their kids' ways into top universities across the country, often as athletic recruits for sports their children didn't even play.

The highest-profile defendants who were left in what's been called Operation Varsity Blues — “Full House” star Lori Loughlin and her fashion designer husband, Mossimo Giannulli — are now heading to prison. Just 15 of the nearly 60 people charged in the sordid scheme that rocked the U.S. educational system are still fighting the charges.

Where the case stands and what happens next:

The prison sentences for the prominent parents charged in the case have ranged from a couple of weeks to nine months.

Loughlin, who gained fame for her role as the wholesome Aunt Becky in the sitcom “Full House," was recently ordered to serve two months behind bars and Giannulli was sentenced to five months for paying $500,000 in bribes to get their two daughters into the University of Southern California. They are supposed to report to prison Nov. 19.

The harshest punishment handed down so far has gone to Douglas Hodge, the former CEO of the Pacific Investment Management Co., who paid bribes totaling $850,000 to get four of his children into the University of Southern California and Georgetown University as athletic recruits. Hodge has begun serving his sentence of nine months, but his lawyers are still trying to appeal his punishment.

Parents headed for trial include William McGlashan, who co-founded an investment fund with U2's Bono. McGlashan is accused of paying $50,000 to have someone correct his son's ACT answers. Prosecutors say he also agreed with the admissions consultant at the center of the scheme, Rick Singer, to pay $250,000 to try to get the teen into USC as a football recruit but didn't go through with it.

McGlashan has fiercely denied the charges and says he told Singer he didn't want to participate in the so-called “side door” scheme. McGlashan's lawyers have said in court documents that his son applied as a legitimate candidate and withdrew his application before he was even admitted.

Also headed for trial is Donna Heinel, who is charged with accepting bribes to get kids into USC when she was the senior associate athletic director.

The three coaches remaining in the case include former Georgetown University tennis coach Gordon Ernst, who is accused of getting $2.7 million in bribes to designate at least 12 applicants as recruits.

Authorities say their investigation into the wide-ranging scheme is ongoing and charges against new parents keep trickling in.

Authorities recently announced charges against Amin Khoury, 54, who is accused of paying $200,000 to get Ernst to designate his daughter as a tennis recruit. An attorney for Khoury, Eoin Beirne, said in an email this week that Khoury had “nothing whatsoever to do with Rick Singer” and that his child's application “was completely accurate and contained no misrepresentations about being a fake athlete or anything else.”

The first group of parents had initially been scheduled to go to trial in October, but that has been delayed until February because of the coronavirus pandemic.

Former federal prosecutor Michael Weinstein, who is not involved in the case, predicted that few, if any, of the remaining defendants will end up going to trial, noting the uphill battle they will face finding sympathetic jurors.

Prosecutors have also netted many cooperators who are expected to testify against anyone who goes to trial, including Singer, who secretly recorded his phone calls with parents and coaches for investigators.

“Not many jurors are going to be sympathetic to very wealthy people trying to buy their children into college,” said Weinstein, now a white-collar attorney with the firm Cole Schotz PC. “Everybody wants to help their kids, but at a certain point we all know where the line is drawn and here the defendants crossed the line," he said.

Secretary of Education Betsy DeVos said last year she was opening an investigation into whether the scandal violated federal education rules, but no details or findings have been released.

Schools have taken steps aimed at ensuring that only legitimate athletes are admitted as recruits. For example, USC says all head coaches now have to certify in writing that they are recruiting the student “on the basis of their athletic ability,” and all team rosters are being audited at the beginning of each school year, among other reforms.

California Gov. Gavin Newsom also signed new laws last year in response to the scandal that tighten rules on when colleges can admit students who don’t meet standard eligibility requirements, among other things.