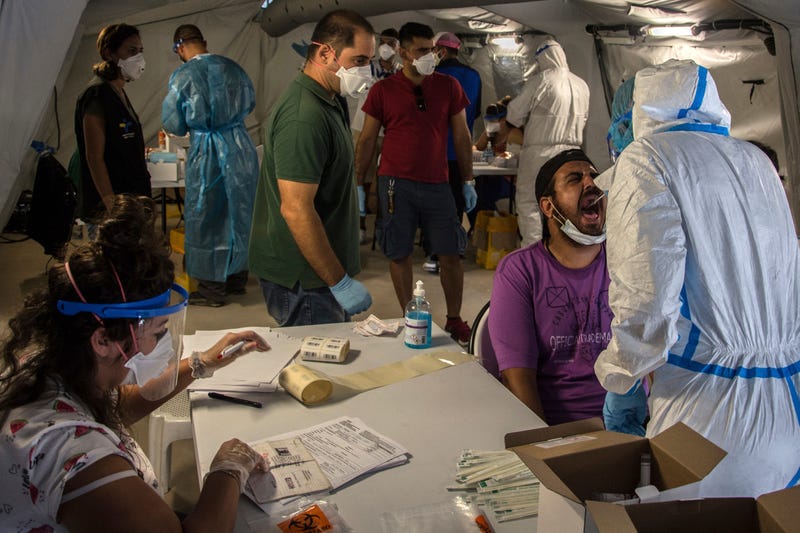 Photo credit FILE - Medical staff of the National Health Organization (EODY) conduct tests for the new coronavirus from migrants in Moria refugee camp on the northeastern Aegean island of Lesbos, Greece, on Friday, Sept. 4, 2020. A major testing and contact-tracing operation at Greece's largest migrant camp on the eastern island of Lesbos has so far detected 17 confirmed cases of COVID-19 infection among the 12,500 people living in the overcrowded facility, officials said on Tuesday, Sept. 8, 2020. (AP Photo/Panagiotis Balaskas, File)
By The Associated Press

ATHENS, Greece (AP) — A major testing and contact-tracing operation at Greece's largest migrant camp on the eastern island of Lesbos has so far detected 17 confirmed cases of COVID-19 among the overcrowded facility's 12,500 residents, authorities said Tuesday.

Health and migration ministry officials said medical teams have carried out 1,600 tests for the coronavirus at the Moria facility — initially designed to hold 2,800 people — and another 400 will follow over the next few days.

The camp has been quarantined until Sept. 15, with a police cordon to enforce the entry and exit ban.

Migration Minister Notis Mitarachi said late Monday the infections were all linked with one Somali man who left the camp after being granted asylum in Greece, went to Athens but failed to find work and housing there and returned to Moria. Health officials weren't immediately able Tuesday to confirm that the virus had been spread by the one man.

Rights groups and charities working with migrants have repeatedly criticized Greece for the living conditions in Moria, which consists of a main camp surrounded by a sprawling tent city.

Since the pandemic broke out, Greek officials focused on preventing COVID-19 outbreaks at the cramped eastern Aegean Sea island camps, quarantining people who arrive on smugglers' boats from Turkey and testing for the virus before allowing them into the camps. The strategy worked until last week, when the Somali man returned to live in a tent outside the main camp.

Mitarachi said in Monday's interview with private Alpha TV that the incident strengthened the government's resolve to eventually build closed island centers for asylum-seekers, where entry and exit would be strictly controlled.

“It worries us, and that is why we need closed centers that will provide more space for each asylum-seeker,” he said. “People who are granted asylum must leave the centers” after being given formal refugee status, he said.

Minor COVID-19 outbreaks have also been recorded in some mainland camps, which, however, are much smaller than the island facilities and where it's harder for the virus to spread unchecked.

Lockdown measures during the first phase of the pandemic and tighter monitoring of land and sea borders with Turkey — from which most asylum-seekers enter the European Union country — have substantially reduced migratory flows into Greece.

Mitarachi said that this summer, for the first time, the number of migrants arriving in Greece was smaller than the number of those leaving the country — either through relocation programs to other EU countries or by being deported after being refused formal refugee status.

Greece’s economy is in a pandemic-induced recession, as it was starting to recover from a 10-year financial crisis, and unemployment is around 17%.

“The truth is that our country is not an attractive destination for migrants and refugees as far as the job market is concerned,” Mitarachi said.