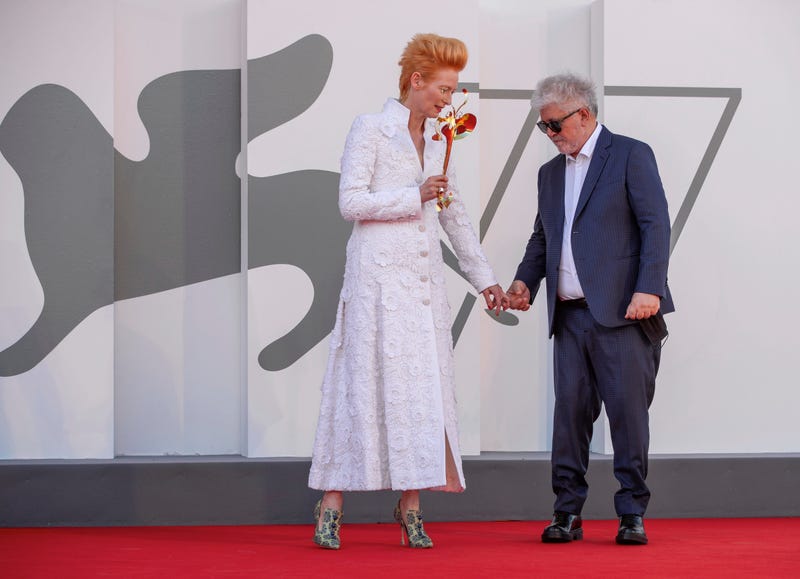 Photo credit Director Pedro Almodovar, right, and actress Tilda Swinton pose on the red carpet of the movie 'The human voice' during the 77th edition of the Venice Film Festival at the Venice Lido, Italy, Thursday, Sep. 3, 2020. The Venice Film Festival goes from Sept. 2 through Sept. 12. Italy was among the countries hardest hit by the coronavirus pandemic, and the festival will serve as a celebration of its re-opening and a sign that the film world, largely on pause since March, is coming back as well. (AP Photo/Domenico Stinellis)
By The Associated Press

VENICE (AP) — Spanish director Pedro Almodovar has joined a chorus of voices at the Venice Film Festival urging the reopening of movie theaters after coronavirus lockdowns, saying films are meant to be seen on the big screen, not at home.

Venice organizers have prided themselves on pushing ahead with the festival despite the cumbersome and costly anti-virus restrictions that include protective masks during all screenings, theaters at a half or one-third capacity and rigorous temperature checks and sanitization. They went ahead with the first major in-person COVID-era film festival convinced they needed to chart a path forward for a film industry hard-hit by the lockdowns.

Almodovar, who premiered his short film “The Human Voice” on Thursday, said streaming platforms had played an “essential role” in keeping people entertained during months of virus-required confinement at home.

But he said they had also contributed to the “dangerous” phenomenon of people growing increasingly comfortable living, working and eating at home — a type of “imprisonment” that he said must be resisted.

“And the antidote is the cinema,” he said, describing going out, sitting next to strangers in a movie theater where “you find yourself crying or rejoicing with other people.”

“If I put my film on a platform like Netflix, then I somehow lose that contact and that meeting point with the spectator,” he said. “So you have to tell people to go to the cinema, to go to the theaters, because some things will only be discovered on the big screen, in the dark with people that we do not know.”

That said, it won’t be the same.

Daniele Luchetti’s family drama “Ties” received a sustained round of applause when it opened the festival on Wednesday night. But the Italian director said Thursday there was something off: Social distancing rules for the theater made viewers feel like they were in a “vacuum bubble” and dispersed the sound of the clapping at the end.

“I know very well how an audience reacts to a movie, both when they like and when they don’t like it,” Luchetti told The Associated Press after his film premiered. “This time the atmosphere was very unusual. Just the fact of not having a person on your side: I couldn’t turn and see a crowd of people either laughing or watching carefully.”

He said he heard the applause at the end, but said it was sparse, given every other seat was left empty. “It was an applause in a space with a different balance,” he said. But he conceded, “I believe we need to get used to this.”

Tilda Swinton, who stars in Almodovar's short and received a Golden Lion Lifetime Achievement award, made the same point from the stage of the Lido's main theater, saying she was overwhelmed seeing the eyes and ears of the audience (though not their mouths because they were all covered in masks.)