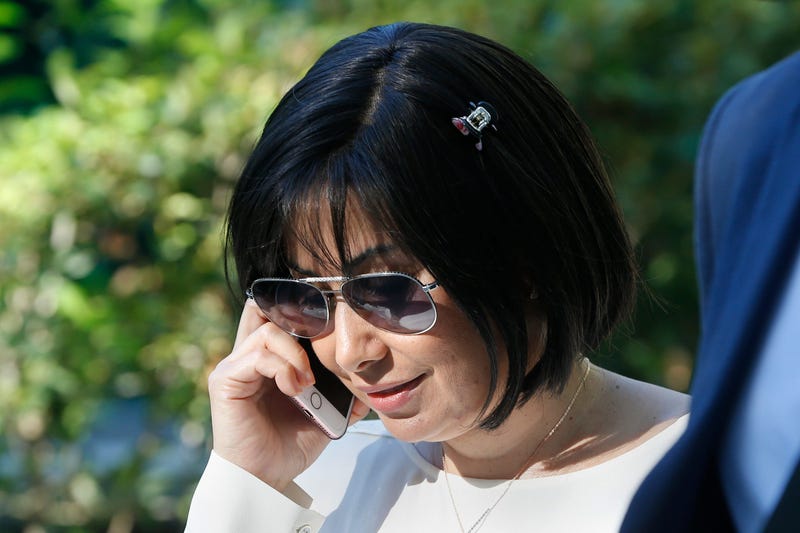 Photo credit FILE - In this Sept. 24, 2018 file photo, Claudia Patricia Diaz Guillen, the former nurse of late Venezuelan President Hugo Chavez, leaves the national court in Madrid, Spain, where she fought and won a case of extradition at Venezuela's request for alleged money laundering. It was 2014 when Diaz, then Venezuela's former treasurer, was looking for a safe haven to store the unexplained wealth she had accumulated over the years, and allegedly turned to one of the oldest ways of moving vast sums of money anonymously: buying gold. (AP Photo/Paul White, File)
By The Associated Press

MIAMI (AP) — It was 2014 and Venezuela's former treasurer Claudia Díaz was looking for a safe haven to store the unexplained wealth she had accumulated over the years. Then-president Hugo Chávez, who she once served as a nurse, had recently died and with the election of Nicolás Maduro, the nation's politics and relations with the U.S. were in tumult.

So Díaz allegedly turned to one of the oldest ways of moving vast sums of money anonymously: buying gold.

In quick succession a shell company established in the Caribbean island nation of St. Vincent and the Grenadines that she allegedly controlled purchased 250 gold bars valued at more than $9.5 million, according to court records from Liechtenstein obtained by The Associated Press. The bars, weighing a kilogram (2.2 pounds) each, were allegedly stored at a private vault in the tiny European principality available to Díaz and her son after his 18th birthday. A few years later, a nearly identical amount of bullion was apparently sold by a representative of Díaz, with much of the proceeds deposited into a Swiss bank.

Those transactions are now at the center of an international criminal investigation into the network of shell companies and dodgy Swiss bankers that have helped turn Venezuela into one of the most corrupt countries in the world. While as much as $300 billion is estimated to have been raided from Venezuela's state coffers in two decades of socialist rule, investigators' understanding of how the dirty money was laundered is still emerging. The physical transfer of heavy gold bars — something previously unseen in court records — underscore the creative lengths to which some Venezuelans have gone to hide their stolen wealth.

With a reputation for secrecy and the world’s highest income per capita, the German-speaking microstate of Liechtenstein has long been a banking magnet for the world’s uber-rich. But like neighboring Switzerland, with whom it shares a currency and customs union, its reputation as a freewheeling offshore financial center has been rocked by scandal. Spurred by pressure from the U.S., which has indicted numerous Venezuelan officials and sanctioned Maduro's government for financial crimes throughout the world, the two countries are now doing their utmost to expose corruption in Venezuela.

“Venezuela has become a virtual pariah,” said Michael Levi, an expert on financial crimes in Europe and professor at Cardiff University in the U.K. “Tight-lipped bankers were happy to take their money for years but now everybody is avoiding the country at all costs not just to protect their reputations but to avoid regulatory and even criminal penalties."

Details of the investigation into Díaz and five alleged associates come from a 14-page legal assistance request sent Nov. 22, 2019, by a court in Liechtenstein and the response two weeks later by prosecutors in Geneva pledging cooperation. A translated copy of the petition, and the Swiss response, were provided separately to the AP by two people on the condition of anonymity because the probe is ongoing.

The state court in Liechtenstein confirmed the authenticity of the request. Switzerland's Attorney General's office said it transmitted the information in May but is not conducting any criminal proceedings at the moment.

Díaz was virtually unknown until she and her husband, a former security adviser to Chávez, appeared in 2016 in a dump of secret financial documents known as the Panama Papers, which provided a rare look at how some of the world’s richest people hide their money. Authorities raided the couple’s Caracas home and seized what they described as a collection of luxury cars, artwork, and documents related to real estate holdings inside and out of Venezuela.

Díaz, 46, was a former petty officer in Venezuela’s navy who took care of an ailing Chávez before the Venezuelan leader died of cancer in 2013. In 2011, Chávez named her Venezuela’s national treasurer. She was replaced when Chávez’s successor Maduro was elected in 2013. Díaz and her husband, Adrián Velásquez, currently live in Madrid, where they were briefly arrested in 2018 on a Venezuelan warrant.

In addition to the probe in Liechtenstein, the couple has been sanctioned in the U.S. for their alleged involvement in a $2.4 billion currency scheme and are identified as unnamed co-conspirators in a Miami federal indictment against Díaz's predecessor as treasurer. Spanish prosecutors are also investigating their purchase of a $1.8 million apartment in Madrid.

Ismael Oliver, the Madrid-based lawyer of both Díaz and her husband, said that his clients had “no knowledge, official or otherwise,” of the investigation by Liechtenstein.

“She radically denies having had any gold ingots or any bank account in Liechtenstein,” Oliver said.

A key focus of the Liechtenstein investigation is Swiss banker Charles-Henry de Beaumont, who worked at the Geneva-based Compagnie Bancaire Helvetique SA at the same time Díaz oversaw the OPEC nation's finances. The Liechtenstein request identifies Beaumont as the person “in charge of transferring the funds of corrupt members of the Venezuelan government to Switzerland.” Beaumont has not been charged with any crimes.

According to the Liechtenstein court's request, Beaumont was allegedly working with Danilo Diazgranados, a Venezuelan financier who generated attention in 2017 for owning the offshore firm that bought Trump aide Anthony Scaramucci’s hedge fund when he joined the White House.

The family-owned CBH is one of Switzerland’s smaller banks but has seen its assets more than double, to 10.5 billion Swiss francs ($11.4 billion), since 2013 at a time its business in Venezuela was booming. Assets from Latin America accounted for a third of its business last year compared to 12% in 2013, according to the bank's financial statements.

It's not clear how Beaumont and Díaz are related. Attempts to reach Beaumont were unsuccessful. He did not respond to messages at the phone number and e-mail address provided by people who know him. George Yoss, a Miami lawyer believed to have represented him in the past, also did not respond to several phone calls and emails.

But the company Díaz allegedly used to purchase the gold, Amaze Holding Ltd., was registered in June 2012 at the same St. Vincent address within days of two other companies — Greenhill International Ltd. and Amblia Ltd. — that Beaumont allegedly owned and controlled, according to the Liechtenstein court. Wire transfers from Panamanian shell companies were routed through CBH to Greenhill and Amblia's accounts at the state-owned Liechtensteinische Landesbank in 2012, according to the Liechtenstein court.

The court, in its request, said Díaz controlled Amaze through another Venezuelan woman, Norka Luque, who is identified as a friend of former Defense Minister Carmen Melendez and a “straw-woman” for various high ranking politicians and figures in Venezuela.” Efforts to locate Luque were unsuccessful.

In 2018, they filed their own legal assistance request to Geneva accusing the French national of creating several shell companies to launder as much as $4.5 billion stolen through fraudulent currency deals with Venezuela's state-run oil giant PDVSA. The shell companies lent PDVSA bolivars allegedly purchased on the black market, where they were three times cheaper. But they were repaid in U.S. dollars at the inflated official rate, allowing anyone with a “sham loan contract” to triple their money almost overnight, according to U.S. prosecutors.

U.S. prosecutors contend that Beaumont pocketed $22 million by charging a 0.75% fee for all incoming and outgoing wires routed through CBH to the shell companies he helped set up.

“Beaumont also used these money brokers to receive and maintain his kickbacks,” according to prosecutors. A portion of the funds was allegedly used to purchase a $4.6 million property in Miami and another one worth $1.3 million in the Dominican Republic.

Mark Pieth, a money-laundering expert at the University of Basel, Switzerland, said that CBH could lose its license or face other disciplinary action if it is determined they knew, or should’ve known, what Beaumont was doing for his Venezuelan clients. However, U.S. prosecutors in their exchanges with Swiss authorities in 2018 suggest the bank had itself been defrauded by Beaumont.

Pieth said the actions undertaken by CBH appear similar to those by other Swiss banks that have recently been penalized for failing to combat corruption involving Venezuelan clients. In February, Switzerland's financial markets regulator ordered Zurich-based Julius Baer to revamp its management of client advisers after finding 150 transactions over a nine-year period that pointed to “systematic failures" with Venezuela. Previously Credit Suisse was also reprimanded for its dealings with Venezuela as well as its role in corruption at soccer's governing body FIFA and Brazilian oil giant Petrobras.

“The question is whether CBH are the gangsters or the victims,” said Pieth, who reviewed the documents in the case at the AP’s request.

CBH said Beaumont resigned in 2012 and that afterward he is believed to have worked as an independent asset manager with various banks. It strongly denied that it had ever engaged in, facilitated, or condoned money laundering.

CBH “has always maintained rigorous internal anti-money-laundering safeguards and controls to identify and prevent unlawful transactions, as repeatedly confirmed and approved by outside auditors," Christopher Robinson, the head of the bank's legal department, said in a statement. CBH has not been charged with any crimes nor is it a target of the investigation by Liechtenstein.

The gold bars allegedly belonging to Díaz represent just a small fraction of the total amount looted from Venezuela. But they stand as a powerful symbol of the boundless greed that fed a slew of intermediaries, from white-shoe boutique asset managers to some of Europe's oldest banks.

The gold bars were kept inside a private vault, number G1, at Liemeta AG that was leased by Díaz in 2014 for around 20,000 Swiss francs ($21,700) a year, according to the request by Judge Roger Beck of the court in Liechtenstein. Access to the vault was restricted to Díaz and her young son after his 18th birthday.

But Díaz authorized a financier from a two-generation Swiss banking family to withdraw the vault’s contents, which was allegedly done in two transactions — in December 2014 and November 2015, according to Beck's request.

The magistrate said that the whereabouts of the two stacks of 120 and 130 ingots “could not be established.” But he noted that starting in 2018 the intermediary sold an almost identical amount of gold for more than 9.5 million euros. The bulk of the proceeds from those sales were deposited into the Swiss affiliate of Banque Internationale a Luxembourg SA. But 90 kilograms of gold was picked up by Daniel Vogt, whose family’s firm, David Vogt & Partners, stamped paperwork involved in the transactions, according to Beck.

Vogt, in an e-mail, said that his firm had no knowledge of the transactions involving Díaz. He said his firm, which is not a target of the investigation, has no clients in Venezuela and is fully cooperating with authorities.

Meanwhile, Díaz remains ensconced in Madrid. She insists that her considerable savings are the result of a lifetime of honest work and that she never once misappropriated state funds.

She insists her legal problems all stem from her refusal to go along with what she considered Maduro's illegal orders in the confusing aftermath of Chávez's death.

For now, she's under no pressure to explain her wealth. Last year, Spain's National Court blocked her extradition to Venezuela, deeming credible her fears that she could face torture if sent back home.