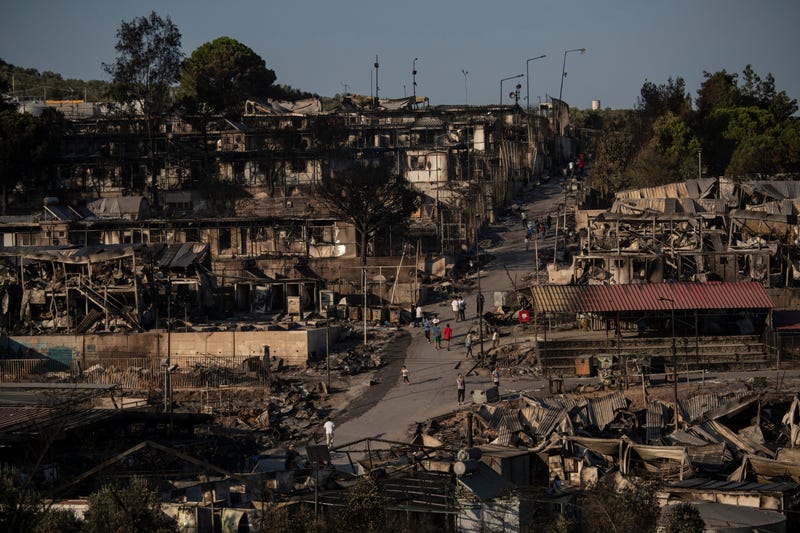 Photo credit Migrants walk at the burned Moria refugee after a fire, on the northeastern Aegean island of Lesbos, Greece, on Wednesday, Sept. 9, 2020. Fire struck again Wednesday night in Greece's notoriously overcrowded refugee camp on the island of Lesbos, a day after a blaze swept through it and left thousands in need of emergency shelter. The fires caused no injuries, but they renewed criticism of Europe's migration policy. (AP Photo/Petros Giannakouris)
By The Associated Press

MORIA, Greece (AP) — Thousands of migrants left homeless after fires gutted a sprawling refugee camp on the Greek island of Lesbos will not be allowed to travel to mainland Greece, the government said Thursday.

Authorities said the fires were started deliberately on Tuesday and Wednesday nights by residents protesting their confinement at the overcrowded Moria camp.. The camp that housed 12,500 people was locked down due to a COVID-19 outbreak this month.

“Some people do not respect the country that is hosting them, and they strive to prove they are not looking for a passport to a better life,” Greek government spokesman Stelios Petsas said.

Flames continued to eat away at the remnants of the burned-out camp Thursday, sending black smoke over destroyed container homes and the charred adjacent hillside, where thousands had lived in a tent city.

Some 400 unaccompanied children from the camp were flown to shelters in northern Greece, while other migrants will remain on Lesbos and be put in emergency accommodations, Petsas said.

“They will not leave (the island) because of the fire,” he told reporters.

A ferry and two navy ships will be used as part of the emergency housing, government officials said. In the meantime, thousands of camp residents were sleeping rough on a roadside near the gutted camp.

On a baking-hot stretch of highway about a mile from the Moria camp, Leonie Raymon, a refugee from Cameroon, said he had not received any help or food since fleeing the fires early Wednesday.

“Under the stars, I’m going to sleep under the stars like all these people here,” he said ”(I’ve) nowhere to go since everything burned so we slept outside and we’ll continue here.”

French President Emmanuel Macron said he had spoken with Chancellor Angela Merkel of Germany to discuss the promised EU support.

“There is a terrible reality with these fires. Many children, women, men are in these camps in absolutely terrible conditions. We want to show solidarity with Greece that lives up to European values,” Macron said Thursday.

The camp at Moria was set up during a massive wave on migration into Europe in 2015-16 but has been regarded by critics as a symbol of failings in EU migration policy.

The camp accommodated people fleeing conflict and poverty in the Middle East, Africa, and Asia who arrive clandestinely on Lesbos from the nearby Turkish coast. Aid agencies have long warned of dire conditions at Moria, a facility built to house just over 2,750 people.

On Thursday, a group of local residents angered by the situation and the presence of the camp in their area blocked a road leading to the camp to prevent machinery from reaching the camp to clear up.

“We’ve reached our limits. We’re anxious, we feel insecure, we’re fed up, we don’t know how to act anymore.”

Lorne Cook in Brussels, Angela Charlton in Paris, and Nicholas Paphitis and Derek Gatopoulos in Athens contributed to this report.