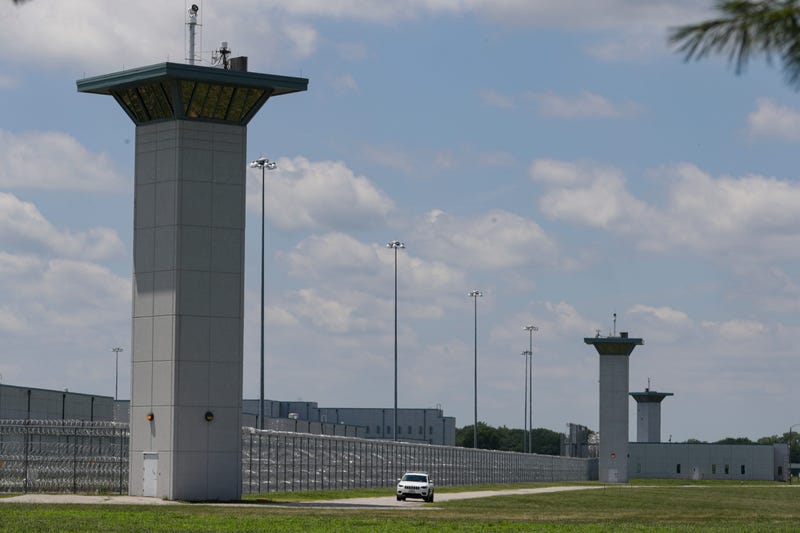 Photo credit FILE - In this July 17, 2020, file photo the federal prison complex in Terre Haute, Ind., is shown. Indiana State Police agreed Friday, Aug. 14, 2020 to stop blocking roads to the prison where federal executions resumed last month and are set to continue, backing down after anti-death penalty activists said in a lawsuit the roadblocks impeded their speech rights. (AP Photo/Michael Conroy, File)
By The Associated Press

CHICAGO (AP) — Indiana State Police agreed Friday to stop blocking roads to a prison where federal executions resumed last month and are set to continue, backing down after anti-death penalty activists said in a lawsuit the roadblocks impeded their free speech rights.

During the first three federal executions in July following a 17-year hiatus, troopers shut main roads to the Federal Correctional Complex in Terre Haute, Indiana, where all federal executions are carried out by lethal injection. Two are planned this month and two in September.

A joint notice filed in Indianapolis federal court says state police will no longer prevent demonstrators from convening near an intersection across from the sprawling prison. In return, the Aug. 4 lawsuit seeking court intervention will be dismissed.

During the executions last month, the obstructed roads forced demonstrators to gather nearly 2 miles (3 kilometers) from the prison, which the lawsuit argued prevented them from mounting credible protests.

“This is a victory for the First Amendment," he said Friday. "But it is troubling that it took a lawsuit to allow us to shine a spotlight on the outrageous behavior going on behind the razor wire."

Friday’s filing says the resolution of the dispute is not an admission that state police, the only named defendant, accepted the lawsuit allegations.

“The Indiana State Police will continue to provide a safe environment for people who are expressing their views on the First Amendment,” ISP spokesman Sgt. Matt Ames said after word broke about the Friday filing.

Backers of the death penalty say the Trump administration's resumption of executions is bringing justice—too long delayed— to victims and their families.

But capital punishment opponents accuse President Donald Trump of pushing for executions to help him claim the mantle of law-and-order candidate.

“He just wants to be able to say he has executed more people than any president in well over half a century” during the run-up to the November election, said Bonowitz.

With one more execution, bringing the total so far this year to four, more executions will have been carried out in 2020 than in the previous 57 years combined, according to the Washington, D.C.-based Death Penalty Information Center.

The Federal Bureau of Prisons, which wasn't named in the lawsuit, did set aside a fenced-in area within the prison for protesters. But the lawsuit said it was too restrictive and isolated, making it impossible for protesters to be seen by and interact with members of the public and media. The filing didn’t indicate that those federal procedures would change.

The first of the executions on July 14 was of former white supremacist Daniel Lewis Lee. Two others, Wesley Purkey and Dustin Honken, were executed later the same week.

The only Native American on federal death row, Lezmond Mitchell, is scheduled to be put to death on Aug. 26. Keith Dwayne Nelson’s execution is set for the same week.

The victims of Lee, Purkey and Honken, who were white, also included children. LeCroy and Nelson are also white.