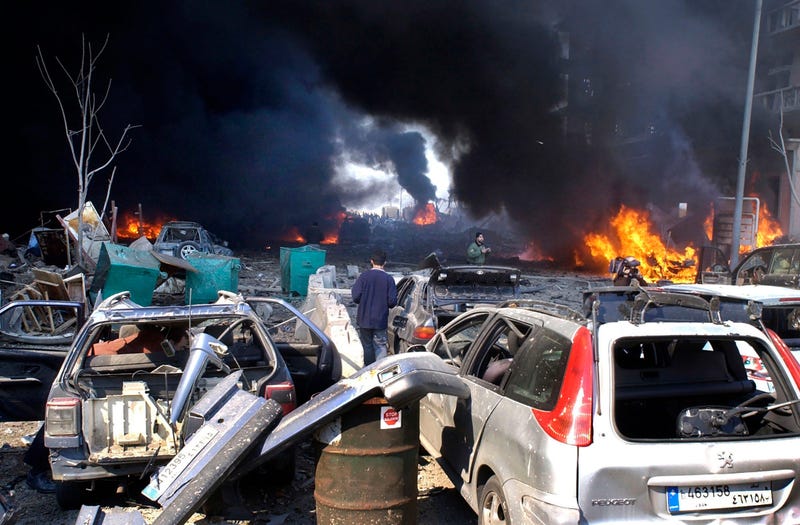 Photo credit FILE- In this Feb. 14, 2005 file photo, destroyed vehicles litter the site of a massive bomb attack that tore through the motorcade of former Prime Minister Rafik Hariri in Beirut, Lebanon. More than 15 years after the truck bomb assassination of Hariri in Beirut, a U.N.-backed tribunal in the Netherlands is announcing verdicts this week in the trial of four members of the militant group Hezbollah allegedly involved in the killing. (AP Photo, File)
By The Associated Press

LEIDSCHENDAM, Netherlands (AP) — A U.N.-backed tribunal on Tuesday convicted one member of the Hezbollah militant group and acquitted three others of involvement in the assassination of former Lebanese Prime Minister Rafik Hariri 15 years ago.

The Special Tribunal for Lebanon said Salim Ayyash was guilty as a co-conspirator of five charges linked to his involvement in the suicide truck bombing. Hariri and 21 others were killed and 226 were wounded in a huge blast outside a seaside hotel in Beirut on Feb. 14, 2005.

However, after a years-long investigation and trial, three other Hezbollah members were acquitted of all charges that they also were involved in the killing of Hariri, which sent shock waves through the Middle East.

None of the suspects were ever arrested and were not in court to hear the verdicts.

The tribunal’s judges also said there was no evidence the leadership of the Hezbollah militant group and Syria were involved in the attack, despite saying the assassination happened as Hariri and his political allies were discussing calling for an “immediate and total withdrawal of Syrian forces from Lebanon,” Presiding Judge David Re said.

The verdict was met with disappointment in Beirut.

“I am very angry,” said Sami Kara, a Hariri supporter, complaining that after 15 years and hundreds of millions of dollars spent on the tribunal, it turned out “that one person carried out such a huge crime.”

That money, he said, should have been spent on building power stations in Lebanon, where electricity cuts are common.

When launched in the wake of the attack, the Hariri tribunal raised hopes that for the first time in multiple instances of political violence in Lebanon, the truth would emerge and the perpetrators would be held to account.

But for many in Lebanon, the tribunal failed on both counts. Many of the suspects, including the man convicted Tuesday, are either dead or out of the reach of justice. And the prosecution was unable to present a cohesive picture of the bombing plot or who ordered it.

The verdicts came at a particularly sensitive time for Lebanon, following the devastating explosion at the Port of Beirut two weeks ago, and as many in Lebanon are calling for an international investigation into that explosion.

But it was doubtful the verdict, coming 15 years after the assassination and with no defendants in court, would bring closure to those who had been waiting for justice.

Hariri's son Saad, himself a former Lebanese premier, told journalists outside the court building that the family accepts the verdicts, though he acknowledged that “everybody's expectation was much higher than what came out.”

“The time when political crimes in Lebanon used to go unpunished are gone,” he said, adding that the family awaits the “implementation of justice."

A hearing will be held at a later date to determine Ayyash’s sentence. As the U.N.-backed court has no death sentence, the maximum sentence is life imprisonment.

Hariri supporters in the Beirut district of Tareeq al-Jadideh expressed anger and disappointment at the verdicts.

“If a police station in Tareeq al-Jadideh had investigated this crime, it would be a better result,” one man, driving away on a scooter, told a local television station.

Sketching the complex political backdrop for the assassination, Re said that in the months before his death, Hariri was a supporter of reducing the influence of Syria and Hezbollah in Lebanon.

He said judges who studied reams of evidence in the trial of the four Hezbollah members accused of involvement in the bombing were “of the view that Syria and Hezbollah may have had motives to eliminate Mr. Hariri, and some of his political allies.”

But he added that there was no evidence the “Hezbollah leadership had any involvement in Mr. Hariri’s murder, and there is no direct evidence of Syrian involvement in it.”

The court had not been expected to rule on either Hezbollah as an organization or Syria — but on the four named Hezbollah suspects — as the tribunal can only accuse individuals, not groups or states. But the fact the tribunal appeared to explicitly and categorically rule out evidence tying Hezbollah’s leadership to the crime was good news for the Iran-backed group, which dominates Lebanese politics and has come under increased scrutiny and pressure at home.

The verdicts were delayed by nearly two weeks as a mark of respect for victims of another devastating explosion — the detonation of nearly 3,000 tons of ammonium nitrate stored at Beirut’s port. The Aug. 4 blast killed around 180 people, injured more than 6,000, left a quarter of a million with homes unfit to live in and plunged a nation already reeling from economic and social malaise even deeper into crisis.

The guilty verdict could compound tensions in the tiny country. Hariri was Lebanon’s most prominent Sunni politician at the time of his assassination, while Hezbollah is a Shiite Muslim group backed and funded by Tehran.

The trial centered on the alleged roles of four Hezbollah members in the suicide truck bombing that killed Hariri and 21 others and wounded 226 people. Prosecutors based their case largely on data from mobile phones allegedly used by the plotters to plan and execute the bombing.

Re said that the telecom evidence in the case was “almost entirely circumstantial.” However, another judge, Janet Nosworthy, later said that judges had ruled that four different networks of mobile phones “were interconnected and coordinated with each other, and operated as covert networks at the relevant times.”

It was the lack of clear evidence from phone records tying them to the bombing plot and efforts to set up a false claim of responsibility that led to the acquittals of three suspects — Assad Sabra, Hassan Oneissi, who changed his name to Hassan Issa, and Hassan Habib Merhi. The judges ordered the arrest warrants for the three men to be withdrawn.

During the trial, which started in 2014 and spanned 415 days of hearings, the tribunal in Leidschendam, Netherlands, near The Hague, heard evidence from 297 witnesses. The court and the investigation is believed to have cost nearly $1 billion.

Initially, five suspects were tried, all of them Hezbollah members. Charges against one of the group’s top military commanders, Mustafa Badreddine, were dropped after he was killed in Syria in 2016. The court said Tuesday it could not prove that Badreddine was the mastermind behind the assassination.

Ayyash, 56, has been at large and is not likely to serve time as Hezbollah had vowed not to hand over any suspects. Prosecutors and defense lawyers can appeal the verdicts.

The assassination was seen by many in Lebanon as the work of Syria, a charge Damascus denies and which the judges now say was not borne out by evidence in the trial.

Nada Abdelsater Abu Samra, a lawyer for the victims of the bombing, said the ruling marked the first time a court has told the Lebanese government it must implement the U.N. Human Rights convention and offer compensation.

She said the ruling also confirmed the failure of Lebanese authorities to protect and save evidence in the early stages of the investigation — which supports calls for an international fact-finding mission into the Aug. 4 port blast to safeguard the truth.

Responding to critics saying it was a waste of time and money, she told the AP: “Justice is not a waste of money or time.”