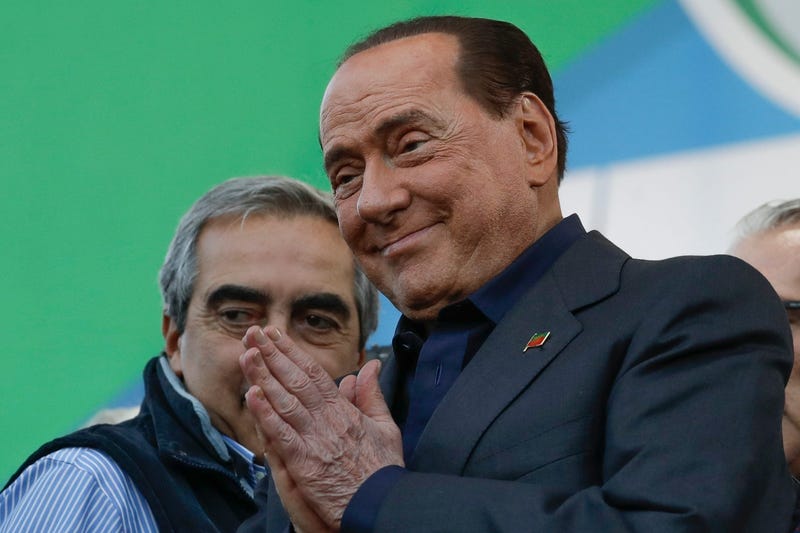 Photo credit FILE - In this Oct. 19, 2019 file photo, Silvio Berlusconi addresses a rally in Rome. Italy’s former prime minister and right-wing leader Silvio Berlusconi has tested positive to coronavirus after a precautionary check, his press office said on Wednesday, Sept. 2, 2020. The three-time-premier and media tycoon had been recently seen with his old-time friend and businessman Flavio Briatore, who was recently hospitalized after testing positive to Covid-19 last month. Berlusconi had tested negative at the time. (AP Photo/Andrew Medichini)
By The Associated Press

ROME (AP) — Former Italian Premier Silvio Berlusconi says he no longer has fever or aches from the “insidious disease” of COVID-19 as he recovers in quarantine at one of his private villas.

Berlusconi spoke by phone Thursday to the leaders of his Forza Italia party who were in Genoa campaigning for Italy's upcoming regional elections.

Only a day earlier, Italian media had quoted his doctor as saying that Berlusconi had tested positive but had no symptoms. Berlusconi turns 84 later this month.

Berlusconi, a TV and real estate mogul, had told supporters he would continue campaigning for his small, center-right party while in quarantine at his estate near Milan.

“I have no more fever, I have no more pains," Berlusconi said. “I want to reassure you that I am well enough and continue to work and will participate in all possible ways in the electoral campaign underway.”

“It’s an insidious disease,” he added.

Voters in several of Italy's regions cast ballots for governor on Sept. 20-21.

Italy was the epicenter of Europe's outbreak in February and March, and has seen about 35,500 people die in the pandemic, the second-highest toll in Europe after Britain. Experts say all figures understate the true impact of the pandemic, due to limited testing and other factors.

Many of those recently testing positive in Italy have returned from popular Mediterranean Sea destinations, among them Sardinia, where clusters of coronavirus infections have erupted. Berlusconi has a seaside villa on Sardinia's Emerald Coast and spent some of his summer vacation there.

Among those receiving thanks from Berlusconi for their get-well wishes was the governor of Lazio, the region which includes Rome. Gov. Nicola Zingaretti, from the rival Democratic Party, had COVID-19 early in the outbreak and recovered.