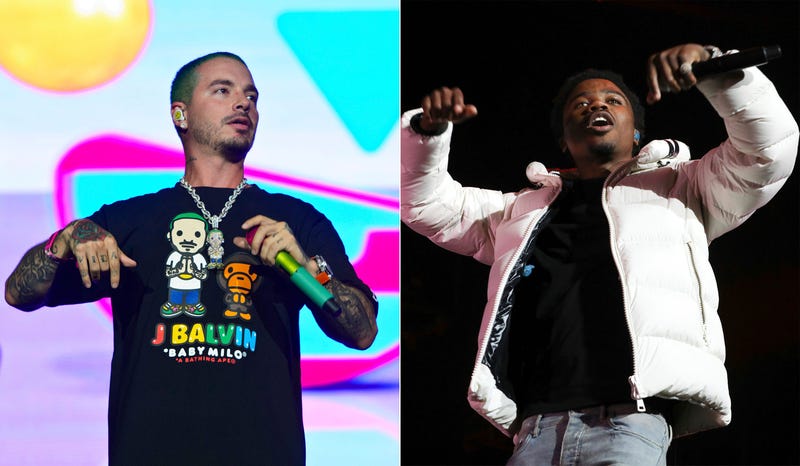 Photo credit This combination photo shows J Balvin performing at Lollapalooza in Chicago on Aug. 3, 2019, left, and Roddy Ricch performing at the 7th annual BET Experience in Los Angeles on June 21, 2019. Both artists have canceled their scheduled performances at the MTV VMAs on Sunday. (Photos by Amy Harris, left, and Mark Von Holden/Invision/AP)
By The Associated Press

Ricch announced his cancellation in a statement posted to Instagram Live, saying: “My team and I did everything in our power to make this work, due to COVID compliance issues at the last minute we had to call off the performance."

The MTV VMAs will air on Sunday at 8 p.m. ET. The show was originally supposed to take place at the Barclays Center in Brooklyn and will now be held outdoors at various places in New York City in response to the coronavirus pandemic.

“My team and I are safe and everyone’s health is a main priority, as well as giving a quality performance," Ricch said. “I appreciate MTV for the opportunity to perform and I hope I can see y’all next year. STAY SAFE.”

A representative for Balvin confirmed on Monday that he would no longer perform at the event, but no details were provided. In a pre-taped video released almost two weeks ago, Balvin revealed he contracted COVID-19 and that it impacted him heavily and made his life difficult. While he accepted an award at Premios Juventud 2020, he told viewers: “This is not a joke ... It’s very dangerous. Take a lot of care of yourselves."

Gaga and Grande are the top contenders with nine nominations apiece, most of them for their No. 1 collaboration “Rain on Me.” Ricch is up for three awards, including song of the year for his No. 1 hit “The Box.” And Balvin has four nominations, including three for best Latin.