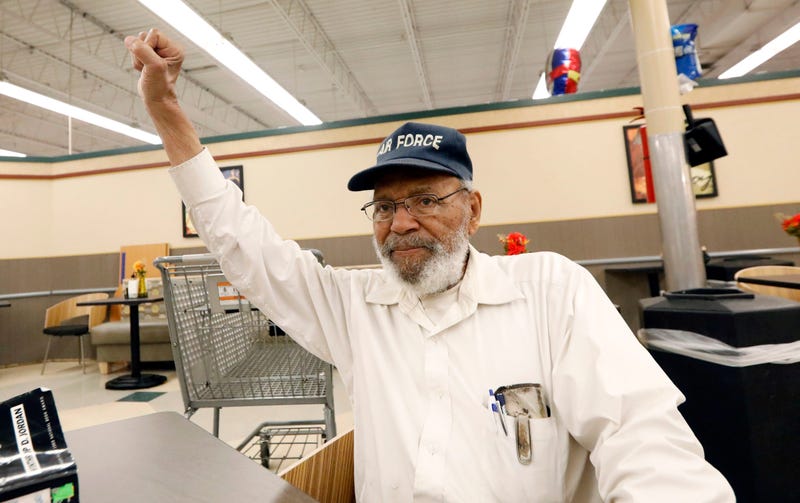 Photo credit FILE - In this July 19, 2018, file photo, civil rights movement activist James Meredith, right, greets a friend with a black power salute as he takes a coffee break at a north Jackson, Miss., grocery store. "Walk Against Fear: James Meredith," scheduled to air Thursday, Oct. 1, 2020, on the Smithsonian Channel, examines the life of a U.S. Air Force veteran-turn-human right agitator whose admission into the University of Mississippi forced President John F. Kennedy to send federal troops into the state to quell a white supremacy uprising. It was one of the most violent moments of the Civil Rights Movement and it forever changed life in the American Deep South. (AP Photo/Rogelio V. Solis, File)
By The Associated Press

“Walk Against Fear: James Meredith,” scheduled to air Thursday on the Smithsonian Channel, examines the life of a U.S. Air Force veteran and human rights agitator whose admission to the University of Mississippi forced President John F. Kennedy to send federal troops into the state to quell a white supremacy uprising. It was one of the most violent moments of the Civil Rights Movement and Meredith's determination to enroll in Ole Miss forever transformed life in the American Deep South.

Known as a bold, stubborn character from the movement, Meredith was later shot during a peaceful demonstration in Mississippi, and years later drew anger from civil rights leaders for endorsing former Klansman David Duke for Louisiana governor. He shunned interviews and openly supported former segregationists who he said he was helping transform.

But Meredith told The Associated Press on Tuesday he believed all of his actions in his life had been predestined by higher forces. “My life has always been according to a plan,” Meredith said. “And I was not the engineer of most the plan.”

Born in Kosciusko, Mississippi, Meredith graduated from high school in St. Petersburg, Florida, and enlisted in the U.S. Air Force, where he took courses at New Mexico Western College — now Western New Mexico University — in Silver City, New Mexico. Those classes in New Mexico changed his life and set him on a path to become a writer. “It was the most important thing that ever happened to me,” Meredith said.

The experience in New Mexico also got him thinking of attending Ole Miss, an all-white college that barred Black students.

The documentary follows Meredith from his decision to challenge the University of Mississippi's segregationist policies and then a governor who personally tried to refuse to admit him.

Meredith eventually attended classes thanks to federal court orders only to see white students walk out in protest.

Later, he set out on a public “Walk Against Fear” in 1966 to prove that a Black man could walk peacefully in Mississippi. He was shot on the second day. AP photographer Jack Thornell captured a haunting image of Meredith grimacing in pain as he tried to pull himself across Highway 51 after being shot in Hernando, Mississippi.

“I didn't feel anything,” Meredith recalled. “The only thing that mattered to me was that I wasn't dead.”

Meredith said he had been reluctant to open up about his life but was pleased with a BBC project about him that involved Sol B. River, a British theater director and filmmaker. River approached Meredith about the documentary idea and he agreed.

“He’s an extremely intelligent and complex man,” said River, who spent years getting to know Meredith. “I hope that people will see this from the viewpoint from the first person ... almost as if they are James Meredith going through this.”

Russell Contreras is a member of The Associated Press’ Race and Ethnicity Team. Follow him on Twitter at: http://twitter.com/russcontreras