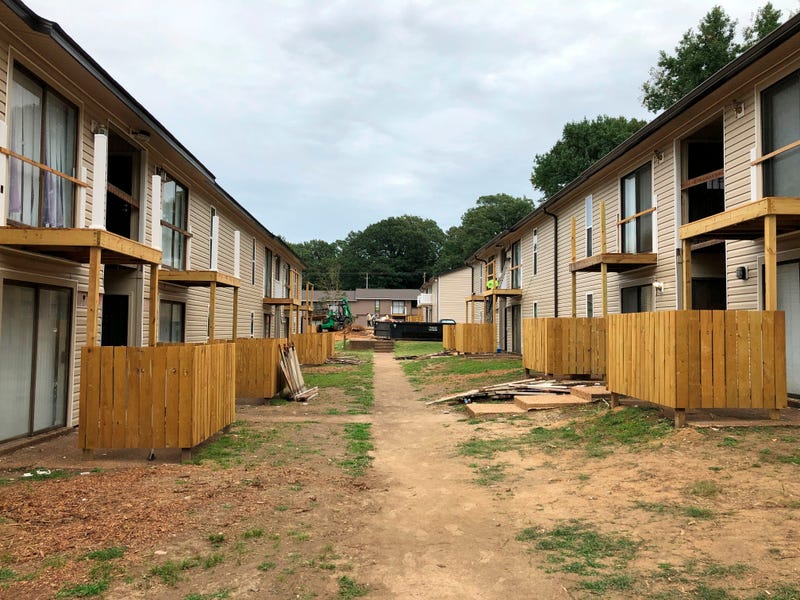 Photo credit Buildings at Hunter Oaks Apartments undergo renovations on Tuesday. Sept. 22, 2020, in Memphis, Tenn. Owners of the apartment complex are among seven landlords who manage or own more than 5,000 rental units and have filed a lawsuit claiming that a national eviction moratorium has not only placed them under unfair financial strain, but also infringed on their rights as property owners. (AP Photo/Adrian Sainz)
By The Associated Press

MEMPHIS, Tenn. (AP) — As millions of Americans struggle to pay their rent during the coronavirus pandemic, landlords are going to courts, claiming that the national eviction moratorium unfairly strains their finances and violates their property rights.

At least 26 such lawsuits have been filed by property owners this year, including several federal challenges of President Donald Trump’s directive, delivered by the Centers for Disease Control and Prevention, that broadly prevents evictions through the end of 2020.

In Memphis, seven landlords who together manage or own more than 5,000 rental units sued this month, accusing Trump and other federal officials of unconstitutionally violating their due process protections and wrongly preempting state laws. The National Apartment Association joined a separate federal lawsuit this month in Georgia against the CDC. Another legal battle has been filed in Ohio.

“All plaintiffs have tenants in units who are delinquent in the payment of rent and who would be otherwise lawfully evicted from the units ... but for the halt order,” the complaint in Memphis says. These landlords are required by law to spend money on repairs and upkeep of the rental homes, but aren't getting federal help under the ban, it says.

Housing advocates worry that overturning these bans could cause homelessness to spike, forcing people to crowd into indoor spaces and shelters and worsening the spread of infection.

The CDC's directive, which took effect Sept. 4, is based on the agency's broad powers to protect public health. The agency put it in the context of other historic, unprecedented and exceedingly rare government responses to the pandemic, and said stopping evictions is an effective way of preventing the spread of the coronavirus.

To be eligible for this protection, renters must earn $198,000 or less for couples filing jointly, or $99,000 for single filers; demonstrate that they've sought government help to pay the rent; declare that they can't pay because of COVID-19 hardships, and affirm that they are likely to become homeless if evicted.

The CDC's directive was handed down just as many other eviction bans — including the CARES Act’s eviction moratorium, which covered an estimated 12 million people in federally supported housing — were set to expire.

This sparked alarm, since more than 20 million renters live in households that have suffered COVID-19-related jobs losses, according to a report from the Aspen Institute.

Still, housing advocates have offered only tepid support of the moratorium, warning that without more federal help for people who are unemployed and behind on their rent in pandemic, it only delays a pending eviction wave.

"I think there are a lot of people still struggling economically. Those are the people who are being kept in their housing right now because of the CDC's order, said Katy Ramsey Mason, an assistant law professor at the University of Memphis.

The CDC's order notably didn't include financial help for landlords, forcing many to consider selling their properties as rents go unpaid. This could ultimately cause an even greater loss of affordable housing.

“In a way I am surprised it took so long for this lawsuit to show up,” Mason said.

These challenges are particularly significant in Memphis, where mass foreclosures in the Great Recession that followed the 2008 housing market collapse forced much of the city's Black middle class to lose ownership of single-family homes. Out-of-state investment companies snapped up these properties and turned them into rentals, said Daniel Schaffzin, who teaches law at the University of Memphis.

All but one of the seven landlords in the Memphis case are limited liability companies, which are typically designed to shield their true owners from responsibility for debts or liabilities. One is registered in Tennessee but based in California. Two others are based in Utah and New Jersey.

Before civil court proceedings were suspended due to the pandemic, about one in five Memphis renters had an eviction notice filed against them between 2016 and 2019, according to housing researcher Austin Harrison. In some neighborhoods, the rate was as high as one in three.

Landlords have filed at least 23 legal challenges against eviction moratoriums around the country in state and local courts, none successful thus far, said Edmund Witter, senior managing attorney at the Housing Justice Project of the Seattle-based King County Bar Association.

It’s telling, Witter said, that in the 13 cases where judges have been asked to weigh in on the merits, all declined to temporarily stop eviction bans while the lawsuits are pending.

Most recently, the libertarian Pacific Legal Foundation sought to resume evictions in Washington state and the city of Seattle, where the governor's eight-month moratorium is set to expire on October 15. The foundation's lawyers said landlords need quick relief because it's unclear how long an eviction ban will remain in place otherwise.

Diane Patterson, a 60-year-old cook in Memphis who lives in one of the 3,400 units in Hunter Oaks Apartments, said the current owners of the apartment complex have done a “great job” since taking over last year, making renovations and installing new siding. She's managed to make her rent each month, but she said landlords in general should hold off on evicting people until the pandemic ends.

“They should wait,” she said. “They’re only making things worse by putting people out in the street.”