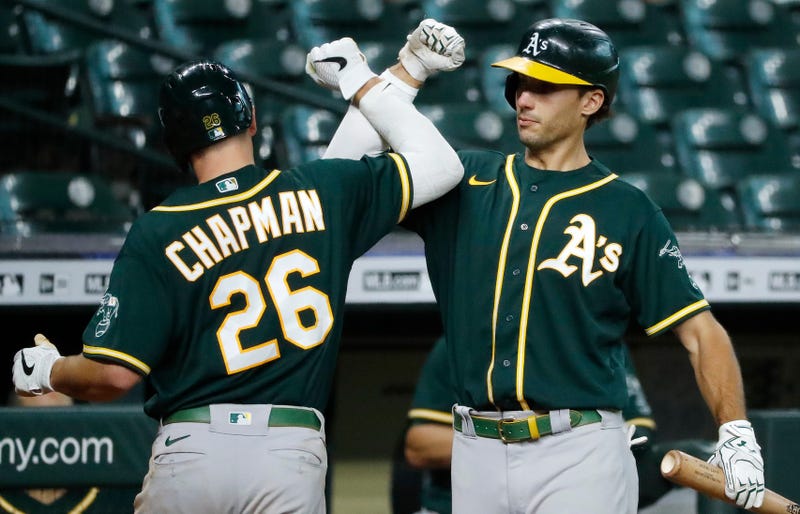 Photo credit Oakland Athletics' Matt Chapman celebrates with Matt Olson after hitting a home run against the Houston Astros during the fourth inning of the second baseball game of a doubleheader Saturday, Aug. 29, 2020, in Houston. (Kevin M. Cox/The Galveston County Daily News via AP)
By The Associated Press

A look at what’s happening around the majors Wednesday:

The Athletics will be off until at least Friday to allow for additional testing and contact tracing after a member of Oakland’s organization tested positive for the coronavirus. Major League Baseball postponed the A’s three-game series in Seattle this week and said the games will be made up with a doubleheader in Seattle on Sept. 14, previously a day off for both teams, and another in Oakland on Sept. 26. Oakland is still set to open a weekend homestand against San Diego on Friday night.

The Dodgers plan to welcome right-hander Walker Buehler back to the rotation after an IL stint due to a blister on his pitching hand. Buehler (1-0, 4.32) will start against Arizona after striking out 11 Rockies over six innings of one-run ball in his previous outing Aug. 21. Los Angeles will be without third baseman Justin Turner, who went on the injured list Tuesday with a strained left hamstring.

Rays right-hander Charlie Morton will come off the injured list and start against the Yankees. Morton was pulled from a start against New York on Aug. 9 with right shoulder inflammation and has been out of action since. He’s 1-1 with a 5.40 ERA this season for the AL East-leading Rays, who are hoping to add to their cushion over the second-place Yankees in the teams’ final matchup this season. Lefty Jordan Montgomery (2-1, 4.44) will pitch for New York.

Fans in Pittsburgh have at least one reason to watch the last-place Pirates after they promoted slick-fielding third baseman Ke’Bryan Hayes on Monday for his major league debut. The 23-year-old, a three-time minor league Gold Glove winner, is the son of 14-year big league veteran Charlie Hayes. Ke’Bryan said when he phoned his dad to share the news of his first MLB call up, the stoicism Charlie long guided his son with silently evaporated.

“He kind of didn’t say anything at first and then I kind of heard it in his voice,” said Hayes, who will wear No. 13 just like his father. “Sounded like he was kind of crying a little bit. That was special for me.”