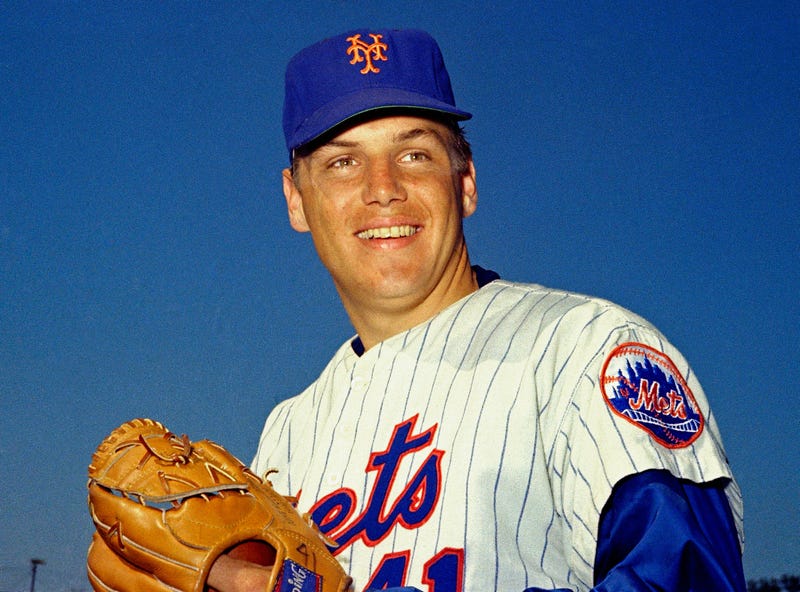 Photo credit FILE - In this March 1968 file photo, New York Mets pitcher Tom Seaver poses for a photo, location not known. Seaver, the galvanizing leader of the Miracle Mets 1969 championship team and a pitcher who personified the rise of expansion teams during an era of radical change for baseball, has died. He was 75. The Hall of Fame said Wednesday night, Sept. 2, 2020, that Seaver died on Aug. 31 from complications of Lewy body dementia and COVID-19. (AP Photo, File)
By The Associated Press

A look at what's happening around the majors on Thursday:

Tributes will certainly pour in for Hall of Fame pitcher Tom Seaver, a day after the New York Mets announced his death at 75.

The ace who steered a stunning transformation from lovable losers to Miracle Mets in 1969 died Monday from complications of Lewy body dementia and COVID-19. Seaver’s family announced in March 2019 he had been diagnosed with dementia and had retired from public life.

“He was simply the greatest Mets player of all-time and among the best to ever play the game,” Mets owner Fred Wilpon and son Jeff, the team’s chief operating officer, said in a statement.

Mike Clevinger (1-1, 3.18 ERA) makes his Padres debut after being traded this week from Cleveland. He’ll start at Angel Stadium -- it’s the ballpark of the franchise that drafted him in 2011 and then regrettably traded him for Vinny Pestano in 2014.

After the deal Monday that beat the trade deadline, Clevinger called the Padres “the most exciting team in baseball by far right now. It’s definitely kind of the place to be right now. I’m stoked that they wanted me here. This is definitely a destination a lot of guys would like to be. Definitely something special brewing here and I think it’s going to be something special for coming years, not just this year.”

The 29-year-old Clevinger went 13-4 with a 2.71 ERA in 21 starts last year. The long-haired right-hander nicknamed “Sunshine” also is contractually controlled through the 2022 season.

It’s a one-game Subway Series at Citi Field as the Mets and Yankees make up a game recently called off because of coronavirus concerns.

J.A. Happ (1-1, 4.05) shut out the Mets on three hits in 7 1/3 innings in his last start, striking out five without a walk. The 37-year-old lefty became the first Yankees starter to reach the eighth this season.

Robert Gsellman (0-0, 5.19) starts for the Mets. He opposed Happ in his last start and gave up a home run to Luke Voit on his fourth pitch.

Blue Jays newcomer Taijuan Walker makes his second start since being acquired in a trade with Seattle. The right-hander pitched six shutout innings against Baltimore in his Toronto last weekend.