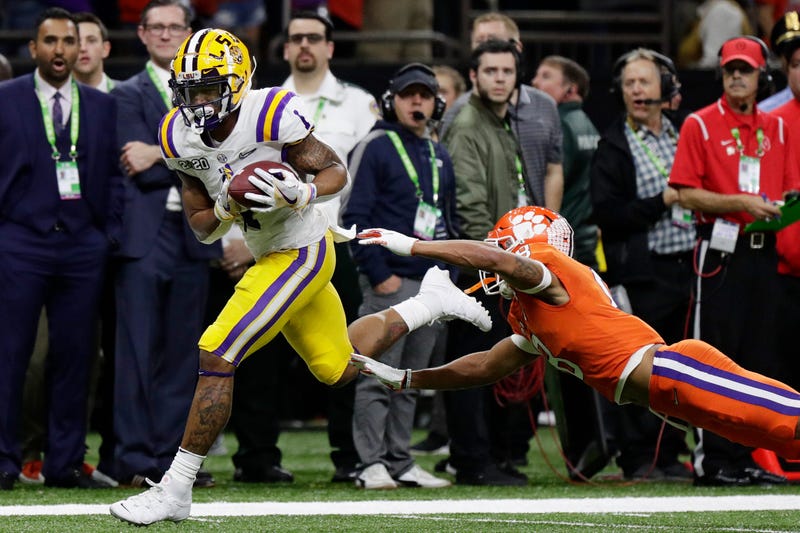 LSU record-setting receiver Ja’Marr Chase announced his decision to opt out of the 2020 college season on Monday and turn his attention to next spring’s NFL Draft, when he is expected to be among the first several players taken overall.

“We are living in such an unprecedented time,” Chase said in a social media post Monday, alluding to the coronavirus pandemic that has surrounded this college football season in uncertainty. “After careful consideration and many emotional conversations with my family, I have come to a difficult decision."

Chase was a first-team All-American and the Biletnikoff award winner in 2019, when he set single-season Southeastern Conference records for yards receiving with 1,780 and touchdowns with 20.

He was the top target for Heisman Trophy-winning quarterback Joe Burrow both throughout last season as a whole and in the Tigers’ 42-25 victory over Clemson in the national championship game, when he had nine receptions for 221 yards and two touchdowns.

Chase decision was surprising only because of its timing.

Uncertainty has swirled around college football in general since it became apparent months ago that the coronavirus pandemic would remain a prevalent public health risk into the fall.

Although the SEC – unlike the Big Ten and Pac-12 – did not move to postpone this season, the conference has eliminated all non-conference games and moved to a 10-game season with a delayed opening day on Sept. 26.

But Chase continued practicing through last week before word began to circulate on Sunday that he was expected to opt out as two defensive teammates – cornerback Kary Vincent Jr. and defensive end Neil Farrell Jr. – already have done.

His departure also comes one week after LSU was ranked sixth in the AP Top 25 preseason poll.

“The competitor in me badly wants to play the season and go to war with my brothers," Chase said in his announcement. "But during this time with so much going on, this is what’s best for my family.”

Up until this past weekend, Chase was expected to be an on- and off-the-field leader on an LSU offense that has numerous new starters, including quarterback Myles Brennan.

LSU coach Ed Orgeron also has listed 6-foot-5, 249-pound freshman tight end Arik Gilbert as a player he envisions being among the Tigers’ most productive in the receiving game.