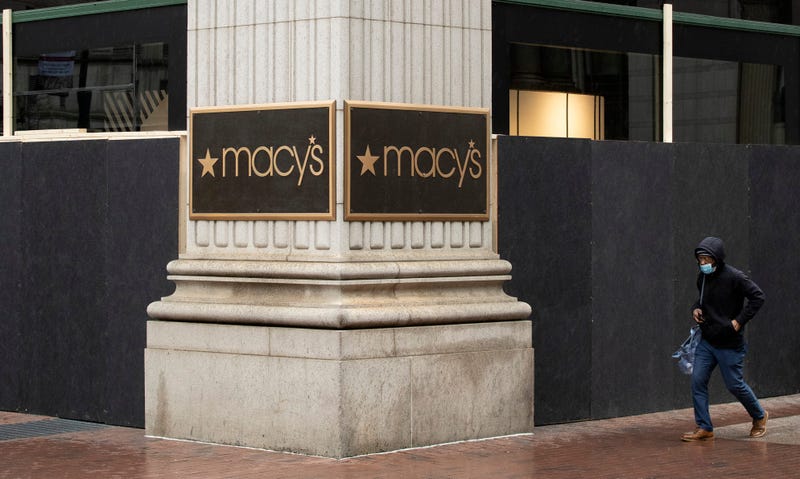 Photo credit FILE - In this April 13, 2020 file photo, a person wearing a protective mask walks past the boarded up windows of a Macy's department store in Philadelphia. Macy’s Inc. on Wednesday, Sept. 2 reported a fiscal second-quarter loss of $431 million, after reporting a profit in the same period a year earlier. (AP Photo/Matt Rourke, File)
By The Associated Press

NEW YORK (AP) — Macy’s got more people to shop on its website and app, but it wasn’t enough to make up for plummeting sales inside its department stores.

Online sales were up 53%, and the company said it attracted 4 million new online customers. But sales sunk 61% inside its stores, which reopened in June after being temporarily closed due to the pandemic.

Macy’s is the country’s largest department store operator, offering a glimpse into what America's are buying.

With people spending more time at home, shoppers bought fewer dresses, luggage and men's suits. But they spent more on comfy athletic wear, as well as decor to spruce up their homes. Macy's said luxury goods did surprisingly well, too, such as high-priced mattresses, perfumes and diamond jewelry. The New York company also owns Bloomingdale’s and the Bluemercury makeup and cosmetic chain.

Many of its department stores are at malls, which have struggled to attract shoppers even before COVID-19. Some of its mall-based rivals have gone bankrupt, including J.C. Penney, Neiman Marcus and Stage Stores.

Over the next two years, Macy's said it plans to open smaller Macy’s and Bloomingdale’s stores that are not attached to a mall.

For the holiday season, it will spread out discounts over a longer period to avoid overcrowding at its stores and continue to push shoppers to buy online and pick up at the curb.

The virus is also forcing Macy's to rethink how it will hold its annual holiday events, like Christmas tree lightings, holiday window decorations and its annual Thanksgiving Day parade. But the company didn't provide any details on changes it plans to make.

Overall, the company reported a second-quarter loss of $431 million, or $1.39 per share, after posting a profit in the same quarter a year ago.

Adjusted losses came to 81 cents per share, which was better than the loss of $1.78 per share Wall Street analysts expected, according to Zacks Investment Research.

This story's headline has been corrected to show that the loss was $431 million, not $400 million.