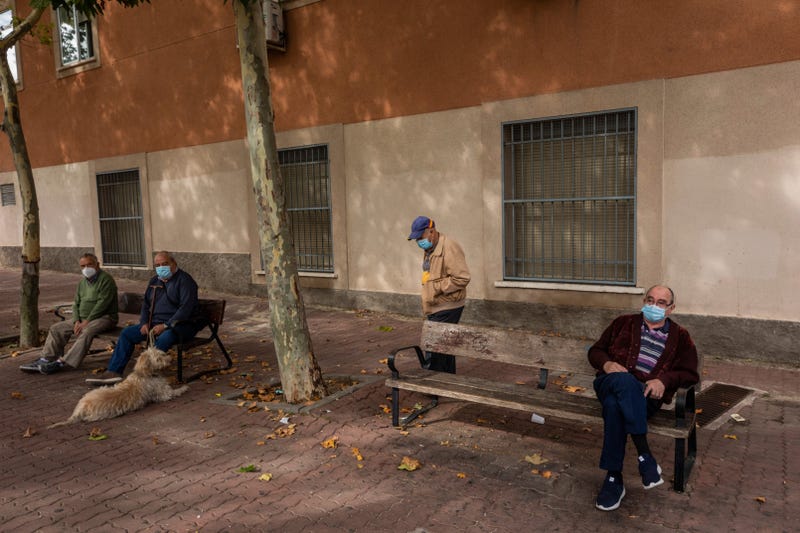 Photo credit Elders wearing face masks to prevent the spread of the coronavirus sit on a park in the southern neighbourhood of Vallecas in Madrid, Spain, Wednesday, Sept. 23, 2020. Madrid is poised to extend its restrictions on movement to more neighborhoods, due to a surge in new cases in other districts and despite an outcry from residents over discrimination. Police on Monday deployed to 37 working-class neighborhoods that have seen 14-day transmission rates above 1,000 per 100,000 inhabitants. (AP Photo/Bernat Armangue)
By The Associated Press

MADRID (AP) — Authorities in Madrid want to hire more doctors and get urgent help from Spain’s military and police to fight a second wave of coronavirus infections that might force them into expanding restrictions on free movement that are already controversial.

“The situation is not going well, neither in Spain nor in Madrid," Aguado told a press conference.

Nearly 860,000 Madrid residents are already required to justify trips out of 37 neighborhoods, mostly working-class areas where locals have complained that the coronavirus restrictions are stigmatizing the poor.

But faced with a “sustained increase” of cases in the region of 6.6 million, according to its deputy health chief, Antonio Zapatero, the regional government is considering expanding those controls to other areas.

A final decision on new restrictions, including new possible limits on customers in restaurants, will be announced Friday, Zapatero told reporters.

Other areas in Spain are also seeing an increase in new virus cases. The country recorded 241 new virus deaths, bringing its confirmed death toll to 30,904. Experts say all numbers understate the true toll of the pandemic, due to limited testing and missed cases.