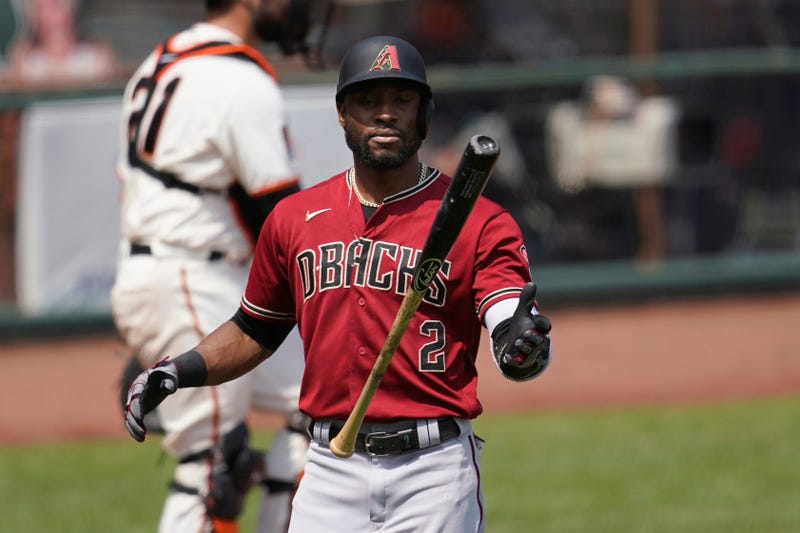 Photo credit Arizona Diamondbacks' Starling Marte flips his bat after striking out against the San Francisco Giants during the fourth inning of a baseball game in San Francisco, Sunday, Aug. 23, 2020. (AP Photo/Jeff Chiu)
By The Associated Press

PHOENIX (AP) — Miami acquired outfielder Starling Marte in a trade with the Arizona Diamondbacks on Monday, giving the Marlins a versatile hitter and defender as they try to make a surprising push for the playoffs.

The Diamondbacks received pitchers Caleb Smith, Humberto Mejia and a player to be named.

The 31-year-old Marte played most of his career with the Pittsburgh Pirates, where he was an All-Star in 2016. The two-time Gold Glove winner in left field was traded to the Diamondbacks during the offseason and played well, batting .311 with two homers, eight doubles and five stolen bases while playing center field.

Marte is eligible for free agency at the end of the season. He went through personal tragedy in May when his wife, Noelia, died of a heart attack.

The Diamondbacks turned into sellers at the trade deadline after losing 10 of their past 11 games. Earlier on Monday, they also traded All-Star left-hander Robbie Ray to the Blue Jays.

The Marlins also traded infielder-outfielder Jonathan Villar to the Toronto Blue Jays for a player to be named. Villar is batting .259 with nine stolen bases and is eligible for free agency after this season.

The Marlins are in the running for a playoff spot in this year's expanded 16-team format. They had a COVID-19 outbreak early in the year that kept them off the field for more than a week but have bounced back and their 15-15 record is good for second in the NL East.