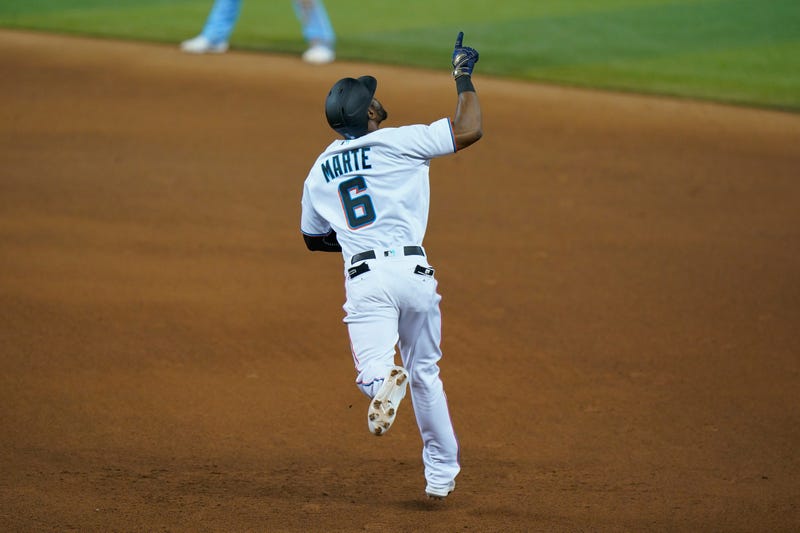 Photo credit Miami Marlins' Starling Marte celebrates as he rounds first base after hitting a home run during the eighth inning of a baseball game against the Toronto Blue Jays, Tuesday, Sept. 1, 2020, in Miami. (AP Photo/Wilfredo Lee)
By The Associated Press

Marte, who was acquired in a trade with Arizona on Monday, drove a 1-0 pitch from Shun Yamaguchi (1-3) deep to left-center for his third homer. He also reached on an error in the sixth and scored from first on Garrett Cooper's double.

James Hoyt (1-0) got the final two outs in the eighth for the win, and Brandon Kintzler pitched a perfect ninth for his eighth save.

Jon Berti homered for Miami, which moved back above .500 with the win. It had dropped its last eight home games.

Robbie Ray made his debut for Toronto, pitching 3 1/3 innings in relief of Julian Merryweather. Ray, who came over in a trade with the Diamondbacks on Monday, allowed two runs, one earned, and four hits.

Jonathan Villar, who was traded from the Marlins to the Blue Jays at the deadline, drove in the first run of the game with a grounder in the first. But he also committed the error that put Marte on in the sixth.

Berti's second homer tied it at 1 in the third. But Derek Fisher put Toronto back in front with a sacrifice fly in the fourth.