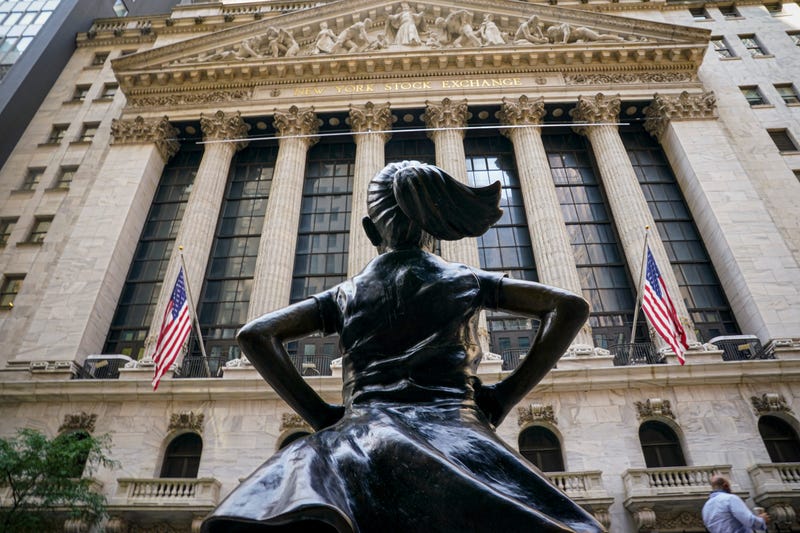 Photo credit The 'Fearless Girl' bronze sculpture looks towards the New York Stock Exchange from its roadside perch, Tuesday Aug. 25, 2020, in New York. Most stocks are opening lower on Wall Street Wednesday, a day after the S&P 500 set its latest record high, but gains from several big technology companies and other stocks nudged the index slightly higher in the early going. (AP Photo/Bebeto Matthews)
By The Associated Press

More blowout profit reports from big tech companies pushed the S&P 500 to another record high on Wednesday. The benchmark index rose 1%, even though most of the stocks within it fell. Tech stocks accounted for the lion’s share of the gains. Salesforce.com soared after reporting results that far surpassed analysts’ estimates. The Dow Jones Industrial Average, which Salesforce.com will be joining next week, rose 0.3%. The Nasdaq rose 1.7%, but smaller stocks fell. Treasury yields rose ahead of a highly anticipated speech from the Federal Reserve’s chair, Jerome Powell, on Thursday. Powell will be speaking as part of the Fed’s annual economic symposium.

More blowout profit reports from big tech companies are pushing the S&P 500 toward another record Wednesday.

The benchmark index was up 1% in afternoon trading, even though most of the stocks within it were falling. Technology stocks accounted for the lion's share of the gains, outweighing losses in health care, utilities, energy and other sectors.

The S&P 500 has returned to a record high, and its movements have remained almost relentlessly upward in recent weeks, but momentum has slowed. Recent data reports have shown a mixed picture on the economy, where activity has largely slowed following its initial rebound from its plummet into recession.

The latest report, released by the Commerce Department Wednesday morning, showed that orders for transportation equipment, computers and other long-lasting goods jumped more in July from June than economists expected. One closely watched number in the report, which gives an indication of business investment plans, rose 1.9% in July.

“The economy continues to show signs of recovery," said Patrick Schaffer, global investment specialist at J.P. Morgan Private Bank. “Virus containment strategies seem more targeted and less blunt than they were in the initial phases." of the pandemic.

Much of the market’s attention is focused on Thursday, when the Federal Reserve’s chair will give a highly anticipated speech on monetary policy. Jerome Powell will be speaking as part of the Fed’s annual economic symposium, which is usually held in Jackson Hole, Wyoming, where past Fed officials have made big market-moving announcements.

Many investors expect Powell to talk about inflation, as well as the importance of Congress delivering more aid for the economy after much of its last round of stimulus expired. Many investors are still assuming Congress will eventually reach a deal on such aid, but partisan disagreements have prevented one so far.

The Fed has been one of the primary reasons for the stock market’s return to a record, after it pledged to keep short-term interest rates at their record low and to continue to buy bonds to support the economy.

“I think the Fed is going to continue to go all in,” said Brad McMillan, chief investment officer for Commonwealth Financial Network, noting that the central bank is also increasingly serious about wanting to boost inflation.

“The speculation is they’ll move to an average inflation target, which will let inflation run hot for awhile,” he said.

The yield on the 10-year Treasury rose to 0.70% from 0.68% late Tuesday. It’s been climbing in recent weeks, up from 0.53% at the end of July, and it tends to move with investors’ expectations for the economy and inflation.

If yields move high enough, it could rattle the stock market because higher rates can draw investors back into bonds and away from stocks. The recent ultra-low rates have helped technology and other high-growth stocks in particular. But analysts say the 10-year Treasury yield would need to get closer to 1% to drive real concerns.

The latest tech stock to be minted a blue chip surged 24.2%, making it the biggest gainer in the S&P 500, after giving a profit report for its latest quarter that Wall Street analysts called “stupendous.” Salesforce.com will join the Dow Jones Industrial Average when trading begins on Monday, replacing Exxon Mobil in the measure of 30 blue-chip stocks.

Other technology stocks were also strong, with Adobe up 7.7%. Hewlett Packard Enterprise gained 3.2% following its own better-than-expected profit report.

Tech stocks in the S&P 500 accounted for more than 80% of the S&P 500's overall gain. It continues a longstanding run on Wall Street, where investors continue to pile into companies that can deliver strong growth even if the economy is weak or quarantined.

“The market is just reflecting how the world has changed and how these (tech) companies are better positioned to take advantage of it,” McMillan said.

Benchmark U.S. crude inched up 0.1% to $43.39 per barrel. Brent crude, the international standard, slipped 0.5% to $45.64 per barrel. Oil has been ticking higher as Hurricane Laura barrels toward the U.S. Gulf Coast, potentially putting energy production at risk.