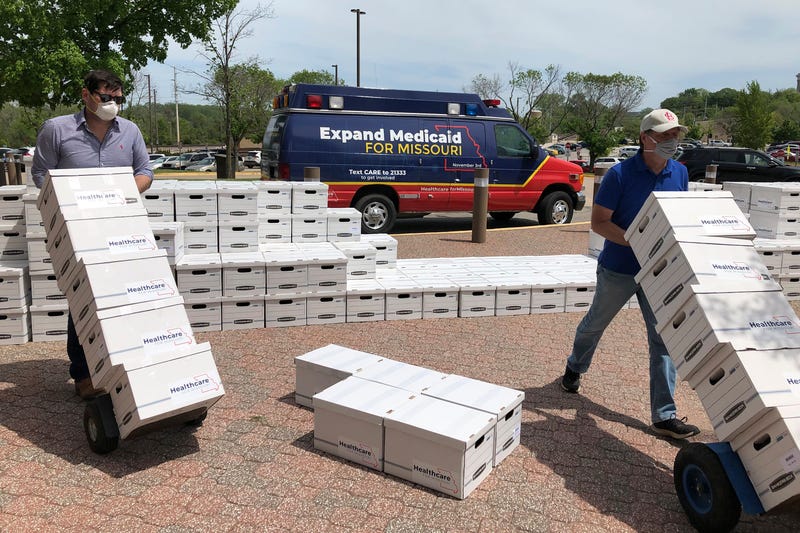 Photo credit FILE - In this May 1, 2020, file photo, campaign workers David Woodruff, left, and Jason White, right, deliver boxes of initiative petitions signatures to the Missouri secretary of state's office in Jefferson City, Mo. President Donald Trump is still trying to overturn “Obamacare,” but his predecessor’s health care law keeps gaining ground in places where it was once unwelcome. Missouri voters this week approved Medicaid expansion by a 53% to 47% margin, making the conservative state the seventh to do so under Trump. (AP Photo/David A. Lieb, File)
By The Associated Press

WASHINGTON (AP) — President Donald Trump is still trying to overturn “Obamacare,” but his predecessor's health care law keeps gaining ground in places where it was once unwelcome.

Missouri voters this week approved Medicaid expansion by a 53% to 47% margin, making the conservative state the seventh to do so under Trump. The president readily carried Missouri in 2016, but the Medicaid vote comes as more people have been losing workplace health insurance in a treacherous coronavirus economy.

That leaves only a dozen states opposed to using the federal-state health program for low-income people as a vehicle for covering more adults, mainly people in jobs that don't provide health care. Medicaid expansion is a central feature of former President Barack Obama's Affordable Care Act, covering about 12 million people, while nearly 10 million others get subsidized private insurance.

If present trends continue, it's only a matter of time until all states expand Medicaid, acknowledged Brian Blase, a former health care adviser in the Trump White House, who remains opposed to the expansion.

“Medicaid expansion is terrible policy, but it is attractive to states because it's almost all federal spending and the insurance companies and hospitals get lots of dollars when a state expands Medicaid,” he said.

The federal government pays 90% of the cost of covering people through the expansion, a much higher matching share than for low-income disabled and elderly people traditionally covered by Medicaid. Blase argues that's an incentive to waste federal dollars. Before the ACA most low-income adults couldn't get Medicaid unless they were caring for children.

“There's lots of political pressure to expand,” said Blase. “Eventually all states are going to expand unless the enhanced (federal) match rate changes.”

Voters in another conservative state — Oklahoma — approved a Medicaid expansion earlier this year, although the margin was much closer than in Missouri. Of the seven states that have expanded Medicaid in the Trump years, six have done so by referendum, said Rachel Garfield, a senior policy expert with the nonpartisan Kaiser Family Foundation.

“This is an indication that there is large popular support for providing health care coverage for low-income people, and it is quite possible that this support has increased given what's going on with the pandemic,” Garfield said.

The six states where voters have approved Medicaid expansion in the Trump years are Idaho, Maine, Missouri, Nebraska, Oklahoma and Utah. In Virginia, the legislature passed a Medicaid expansion after Democrats made political gains.

“That has been an interesting feature of the Trump administration, that momentum among the states to expand Medicaid has not slowed down,” said Jesse Cross-Call, a policy expert with the Center on Budget and Policy Priorities, which advocates for low-income people.

Trump is trying to persuade the Supreme Court to toss out “Obamacare,” but as long as it remains the law his administration has to carry out expansions that states approve. Democratic presidential candidate Joe Biden would ask Congress to provide coverage where states have refused.

In Missouri, support for Medicaid expansion in cities and suburbs overcame opposition in rural communities. Supporters used the coronavirus pandemic to highlight the need for health care, especially in the wake of joblessness and loss of employer-provided insurance. The Missouri Chamber of Commerce and Industry, one of the state’s most influential business groups, also pushed for expansion as a way of helping the economy recover after COVID-19.

Cindy Mann, who ran Medicaid under Obama, argues that there's also a strong fairness argument for expansion. About 4.5 million poor adults live in states that have resisted expanding Medicaid. But because of the way the Obama health law is written, they don't qualify for subsidized private insurance through marketplaces like HealthCare.gov and they're stuck in a coverage gap.

“Those people have no access to coverage,” said Mann, now with the Manatt Health consultancy. “Those are a lot of the so-called essential workers, if we think about it through the COVID lens. It's a really inequitable story and one that increasingly can't be tolerated by the public.”

No other state referendum votes on Medicaid expansion are scheduled this political season. But Mann expects the debate will percolate through legislative elections in the 12 states, mainly in the South, that have refused. The biggest prizes are Texas, Florida and Georgia.

“Now they are surrounded by states that have expanded,” she said.

Associated Press writers Summer Ballentine in Columbia, Missouri, and David A. Lieb in Jefferson City, Missouri, contributed to this report.