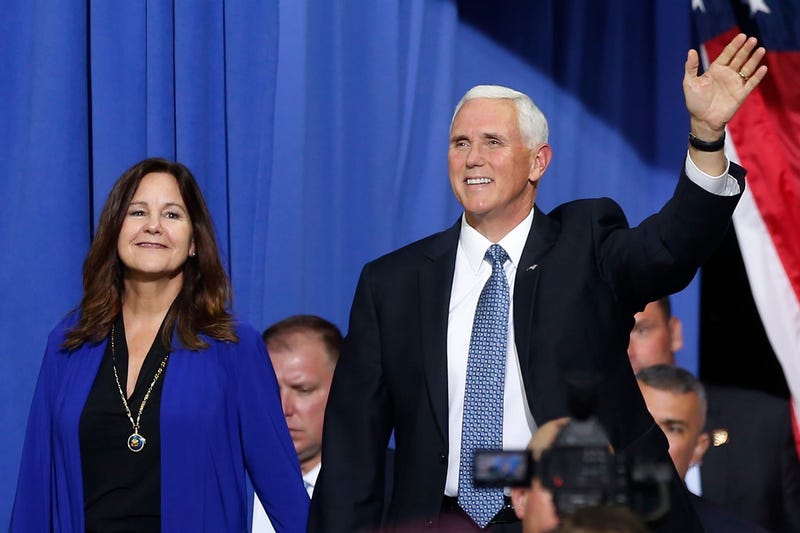 Photo credit FILE - In this Oct. 10, 2019 file photo, Vice President Mike Pence and his wife Karen arrive prior to a campaign rally speech by appear in Minneapolis. Vice President Pence is bringing President Donald Trump's law-and-order campaign message to Minneapolis on Thursday, Sept. 24, 2020, showing support for law enforcement in the city where George Floyd's death after police tried to arrest him sparked angry and sometimes violent protests that spread around the world. (AP Photo/Jim Mone, File)
By The Associated Press

Pence and President Trump's daughter planned to host a listening session with a “Cops for Trump” group, as well as with residents who the Trump reelection campaign says have been “negatively impacted by crime and violent extremism.”

The visit comes about a month after Donald Trump met with small-business owners whose stores in Minneapolis were damaged in violence that erupted after Floyd's death. Trump did not visit the scene of protests nor the site where police held Floyd down as they tried to arrest him for allegedly passing a counterfeit $20 bill at a convenience store; the schedule for Thursday doesn't include those places either.

The visit also will be a day after a Kentucky grand jury weighing charges in Breonna Taylor's death indicted a single former police officer on charges of shooting into neighboring apartments, but chose not to indict any officers directly in her death.

Trump is eager to put Minnesota in play four years after he narrowly lost the state to Hillary Clinton, with a strategy that depends largely on driving up turnout in the rural areas where he runs strongest. For some in Minneapolis, the campaign's law-and-order message is calculated, divisive and damaging.

“Hate and fear are good for getting votes, but it’s not good for governing,” said Paul Eaves, a Minneapolis resident who regularly tends to artwork and flowers at the intersection that has become a memorial to Floyd.

Eaves, 72 and white, called the president a “vile politician."

Floyd died after a white police officer pressed his knee into the handcuffed Black man's neck on May 25 during an arrest attempt that was captured on bystander video. His death set off protests around the world, including some that became violent. Property damage in Minneapolis is estimated at roughly $100 million.

After Floyd's death, a majority of City Council members pledged to abolish the Police Department and replace it with a new agency that would take a more socially minded approach. Their hopes of taking the idea to voters in November was blocked by a city commission and won't happen before 2021, if ever.

The talk of abolishing police came as Minneapolis this summer saw spiking violent crime, as many other big cities did, and as some residents complained that police response times had slowed. Some of the same council members who supported ending the department pressed Police Chief Medaria Arradondo last week to address the rising crime.

Police union President Bob Kroll did not respond to a message seeking comment for this story. He has complained that city leaders have abandoned rank-and-file officers. Roughly 175 officers are seeking work-related disability, according to an attorney helping file the claims, with post-traumatic stress disorder being cited as a main reason for most departures.

A Star Tribune analysis found that as of last week, violent crimes such as homicide, rape, robbery and aggravated assaults were up 17% from the five-year average. Serious assaults, including shootings and stabbings, were up 25%.

Belal Hijazi, owner of the Full Stop gas station in north Minneapolis, spent a night protecting his business while others around him burned during the height of the unrest that followed Floyd's death. Since then, he said, he's seen people taking advantage of a reduced police presence to more freely deal drugs, loiter and shoplift around his station.

“If you try to talk to these guys, they show you guns sometimes,” said Hijazi, who hired an off-duty officer to help with security. “To be honest with you, the police — it looks like they gave up too. … I’m afraid. I’m stressed. I have a dream to move to a different spot. I have six kids, and they need me.”

Jeanelle Austin, 35, a racial justice leadership coach, has emerged as a lead caretaker of the George Floyd Memorial. Austin, who is Black, said Trump's law-and-order message is code for increased law enforcement aiming to “make white people feel safe, but it is a direct threat to Black and brown communities,” she said.

Rozenia Fuller, a pastor at Good News Baptist Church in Minneapolis, called the visit from Pence and Ivanka Trump a “good idea” because she said interaction can change how the current social justice movement is perceived and further its goals.

“I think that proximity is everything. I think that they need to be here, boots on the ground, because they are receiving a false narrative about who we really are and what we really want,” said Fuller, who is Black. “I think any movement that cannot withstand the scrutiny of outside forces is a myth, so they are welcome. Everybody is welcome in this space.”

Mohamed Ibrahim is a corps member for the Associated Press/Report for America Statehouse News Initiative. Report for America is a nonprofit national service program that places journalists in local newsrooms to report on undercovered issues.

news
CVS adding 1,000 rapid-result COVID-19 tests sites by end of the year
news
Krispy Kreme and other chains offering freebies for voting on Election Day
news
8 frightening podcasts to get you ready for Halloween
news
What you should and shouldn’t bring to the polls this Election Day
sports
MLB rips Justin Turner for celebrating with teammates after positive test
news
WATCH: Hurricane Zeta rips the roof of a house completely off