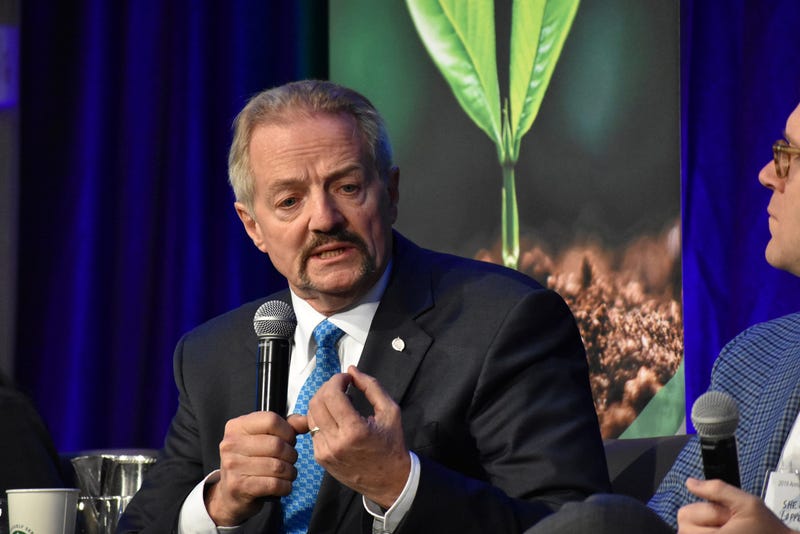 Photo credit FILE - In this Oct. 11, 2019, file photo, U.S. Bureau of Land Management Acting Director William "Perry" Pendley speaks at a conference for journalists in Fort Collins, Colo. President Donald Trump intends to withdraw the nomination of Pendley to head the Bureau of Land Management, a senior administration official said Saturday, Aug. 15, 2020, much to the relief of environmentalists who insisted the longtime advocate of selling federal lands should not be overseeing them. (AP Photo/Matthew Brown, File)
By The Associated Press

BILLINGS, Mont. (AP) — A former oil industry attorney will continue calling the shots for a government agency that oversees nearly a quarter-billion public acres in the U.S. West, despite the White House saying over the weekend that President Donald Trump would withdraw the nomination of William Perry Pendley.

Pendley’s continued rein at the Interior Department’s Bureau of Land Management comes under an unusual arrangement that Pendley himself set up months ago, according to a document obtained by The Associated Press.

In May, as a temporary authorization for him to lead the agency was about to expire, Pendley signed an order that makes his deputy director position the bureau’s default leader while the director’s post is vacant, the document shows.

Details of the succession plan prompted Democrats on Wednesday to renew their calls for the removal of Pendley, a longtime industry attorney and property rights advocate from Wyoming who prior to taking office called for the government to sell its public lands.

“That's baloney. That's not how it works," said Sen. Jon Tester, a Montana Democrat, in an interview. "You don’t want the deputy director of policy and programs being able to dictate who’s in charge of the (bureau.) It’s too important an agency.”

Interior Department spokesman Conner Swanson confirmed that the arrangement means Pendley will continue to lead the bureau. Whether another nominee will be named is up to the White House, Swanson added.

Agency officials declined AP requests for an interview with Pendley and to provide records of his actions while filling the leadership position on a supposedly temporary basis since summer 2019. The May 22 order from Pendley, which was also signed by Interior Department Assistant Secretary Casey Hammond, had specified such records were to be kept.

Pendley's tenure already has far outlasted the 210 days that an official can serve in an acting position under the Federal Vacancies Reform Act, according to a lawsuit filed last month by Montana Gov. Steve Bullock, a Democrat who is seeking to topple Republican Sen. Steve Daines in the November election.

Trump administration officials contend Bullock's lawsuit is frivolous, arguing that Pendley was never officially named “acting director" but rather that he is “exercising the delegated authority of the director."

Critics say the administration is falling back on semantics to obscure and minimize Pendley's influence over an agency that oversees oil and gas drilling, grazing and other activities on vast areas in the U.S. West.

Bullock attorney Raph Graybill say Pendley's May memo “confirms, without a doubt, what we already know: William Perry Pendley runs the Bureau of Land Management and continues to do so in violation of the United States Constitution and federal law.”