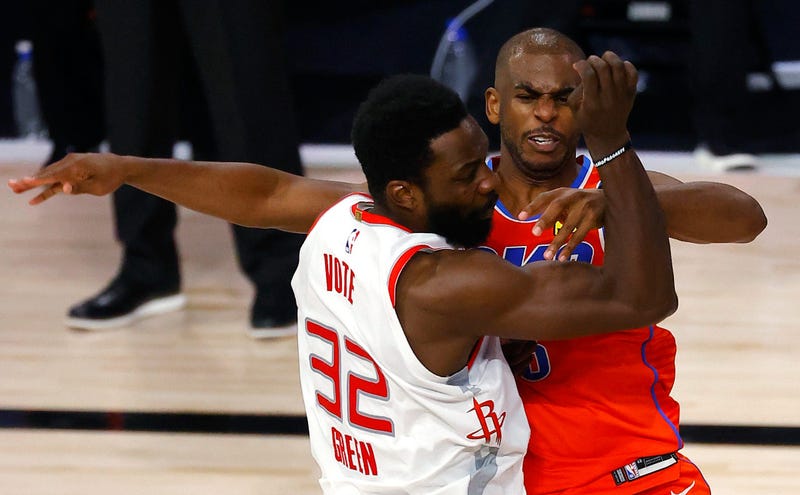 James Harden scored 38 points for Houston, but fouled out 53 seconds into overtime — the first time he's fouled out this season.

The Thunder scored the first 12 points of overtime, powered by two 3-pointers from Paul, to take a 116-104 lead.

Houston missed its first seven shots of overtime before Danuel House made a 3-pointer with less than a minute left. By then it was too late.

Game 4 of the best-of-seven series is Monday.

The Thunder had a balanced scoring attack, with Shai Gilgeous-Alexander adding 23 points and Danilo Gallinari had 20.

Paul made a basket to putt the Thunder within three, House then stepped out of bounds to give the Thunder the ball back. A layup by Steven Adams cut it to 102-101 with less than 30 seconds to go in the fourth.

Paul and Harden got tangled up with Harden before the ball was thrown inbounds. Harden made a free throw., but Houston turned it over.

Gilgeous-Alexander put Oklahoma City up 104-103 with a 3 from the corner on an assist by Paul with 14.3 seconds left.

House made a three throw to tie, but missed the second. Paul’s reverse layup rolled across the rim and out to send it to overtime.

Jeff Green had 22 points for the Rockets. They have played the entire series without Russell Westbrook, who is out with a strained right quadriceps.

Rockets: Coach Mike D’Antoni said Westbrook is improving and did some shooting at practice on Friday. But he still isn’t sure when he’ll return. ... Houston made 15 of 50 3-pointers.

Thunder: Adams left the game late with a bruise on his right knee. He had 13 rebounds.