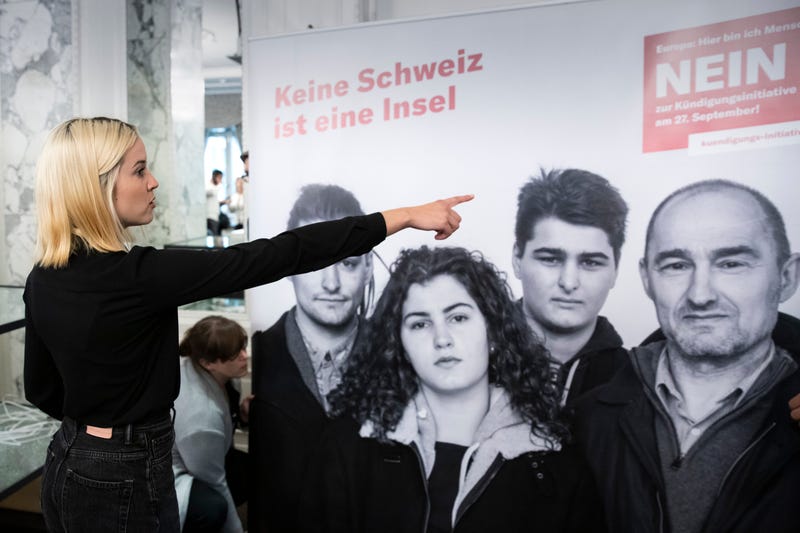 Photo credit Laura Zimmermann, Co-President of Operation Libero, is standing in front of a poster reading 'No. No Switzerland is an island." at the meeting place of the opponents of the popular initiative "For moderate immigration" (the limitation initiative), on Sunday, 27 September 2020, at the Hotel Schweizerhof in Bern, Switzerland. (Peter Klaunzer/Keystone via AP)
By The Associated Press

GENEVA (AP) — Voters in Switzerland cast ballots Sunday on a nationalist party's proposal to limit the number of European Union citizens allowed to live and work in their country.

Swiss public broadcaster SRF reported after polls closed at noon that projections based on partial counts indicated most voters had rejected the measure, which was championed by the populist Swiss People's Party. It had proposed giving preferential access to jobs, social protection and benefits to people from Switzerland over those from the 27-nation bloc that surrounds it.

If passed, the proposal would have further strained the rich Alpine’s country’s deep and lucrative ties to the EU, of which it isn’t a member. It could also lead to reciprocal disadvantages for millions of Swiss citizens if they want to live or work in the EU.

Roughly 1.4 million EU citizens live in the country of about 8.2 million, while around 500,000 Swiss live in EU countries.

In a similar referendum in 2014, the Swiss narrowly voted in favor of limiting access of EU citizens to live and work in Switzerland. Lawmakers, however, refused to fully implement the referendum fearing a hefty impact on Swiss society and businesses, prompting the People’s Party to get the issue back on the ballot again this year.

Since the last vote, Switzerland has witnessed the personal and professional turmoil that Britain's 2016 referendum to leave the European Union has caused, especially for EU citizens in the U.K. and Britons living on the continent. Britain left the EU in January, but is in a transition period until the end of the year.

"I’m not at all in favour, and even more now, because it’s not a time to isolate Switzerland,” he said.

“I’m a daughter of immigrants, so it is a matter that touches me,” she said. “If Switzerland had to withdraw or reduce these agreements (with the EU) I think we would be the real losers.”

The freedom-of-movement measure was being considered alongside nationwide votes on paternity leave, tax breaks for child care, purchases of up to 6 billion francs (about $6.5 billion) worth of new fighter planes by 2030, and the right to hunt wolves to keep their population down.