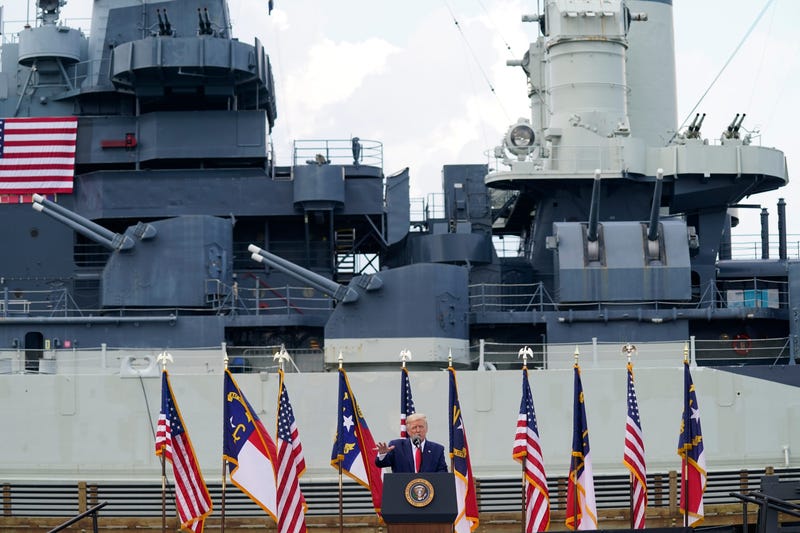 WASHINGTON (AP) — The Latest on the 2020 presidential campaign (all times local):

As thunderstorms threatened, President Donald Trump sped through a V-J Day speech during a visit Wednesday to Wilmington, North Carolina.

Trump appeared before a World War II-era battleship to declare the port city of Wilmington a World War II “Heritage City.” He pointed to a bolt of lightning and said it was God saluting the event.

He honored war veterans, including 97-year-old Hershel “Woody” Williams, the sole surviving Marine from the war to receive the Medal of Honor. The West Virginia native fought in the Battle of Iowa Jima in the Pacific.

Williams traveled to North Carolina with the president aboard Air Force One.

And then referring to Biden, Trump said: “I know a 78-year-old who’s not so sharp."

Joe Biden says the police officer in Kenosha, Wisconsin, who shot Jacob Blake in the back on Aug. 23, leaving the 29—year-old Black man paralyzed, “needs to be charged.”

The comment by the Democratic presidential nominee came after he was asked about remarks by his running mate, California Sen. Kamala Harris, that the officer should face charges.

Biden also says officers should be charged in the shooting death of Breonna Taylor in Kentucky.

Biden plans a visit Thursday to Kenosha, where there have been multiple nights of unrest following Blake’s shooting. Biden says there have been “overwhelming requests” that he come to the city.

He says that if he were president, he'd have the Federal Emergency Management Agency guarantee access to disaster relief for K-12 schools.

Biden says during a campaign event in Wilmington, Delaware, that President Donald Trump “still doesn't have a real plan” to handle the coronavirus pandemic.

The Democrat says "this is an emergency and Donald Trump and his FEMA should treat it as one.”

FEMA officials said this week that the agency would no longer pay for cloth face masks and disinfectant in schools.

Biden says that as president, he'd declare the issue of school reopening a national emergency and direct FEMA to authorize access to emergency assistance for K-12 schools.

Democratic presidential nominee Joe Biden says he'll mark the 19th anniversary of the the Sept. 11 attacks by visiting Shanksville, Pennsylvania, where one of the hijacked planes crashed into a field, killing all passengers and crew onboard.

The White House hasn't announced President Donald Trump’s plans for Sept. 11. He visited the Shanksville memorial for a commemoration in 2018.

A 2,200-acre memorial marks the spot in rural Pennsylvania where Flight 93 went down on Sept. 11, 2001. Three other planes hijacked that day were crashed into the World Trade Center in New York and the Pentagon. Nearly 3,000 people died in the attacks.

The nonpartisan Commission on Presidential Debates has announced the moderators for the upcoming debates between President Donald Trump and Democratic challenger Joe Biden.

Chris Wallace of Fox News will moderate the first debate on Sept. 29 in Cleveland.

Steve Scully of C-SPAN will moderate the “town meeting” debate on Oct. 15 in Miami.

NBC’s Kristen Welker will moderate the final debate on Oct. 22 in Nashville, Tennessee.

Joe Biden raised at least $360 million for his election effort in August, a record-shattering sum that will give the Democratic presidential nominee ample resources to compete in the final two months of the campaign.

That’s according to a person with direct knowledge of the fundraising effort who requested anonymity to discuss internal campaign details.

Biden’s campaign declined to comment. President Donald Trump has not yet released his fundraising figure for the month.

The money was raised in conjunction with the Democratic National Committee. While candidates face a $2,800 limit, Biden can raise far more than that through a joint fundraising committee with the DNC that allows him to collect individual checks worth upward of $600,000.

Joe Biden is traveling to Wisconsin on Thursday as the swing state becomes the focal point for a political debate over violence at protests there and elsewhere in the nation.

Biden's campaign says the Democratic presidential nominee plans to travel to the state with his wife, Jill.

The visit comes two days after President Donald Trump toured Kenosha, Wisconsin, the site of recent protests following the shooting of an unarmed Black man, Jacob Blake, left paralyzed after being shot in the back seven times by an officer. Trump used the opportunity to drive home his campaign message of “law and order” by expressing support for law enforcement and blaming “domestic terror” for the looting and arson that’s taken place in the city during the protests.

The president and his allies are hoping to use the violence at recent protests against Biden, and have charged that if the Democrat were elected such incidents would become the norm.

Biden has repeatedly denounced the protest violence but has expressed sympathy for protesters’ concerns over systemic racism and a commitment to enact police reforms if elected.

It will be Biden's first visit to Wisconsin in nearly two years. It comes after Biden decided against accepting the party’s nomination in Milwaukee, where the Democratic National Convention was to have been held. Instead, the convention was mostly virtual amid the coronavirus pandemic.