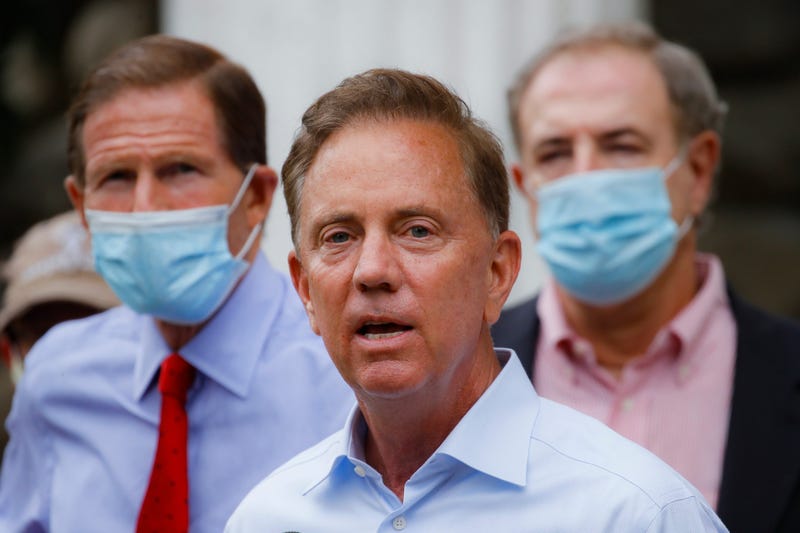 Photo credit FILE- In this Aug. 7, 2020, file photo, Connecticut Gov. Ned Lamont addresses the media in Westport, Conn. During a coronavirus briefing on Thursday, Aug. 20, 2020, Lamont said the Connecticut Department of Labor will be applying for a federal program that could lead to $300 in additional weekly unemployment benefits for certain recipients who've lost work because of the coronavirus pandemic. (AP Photo/John Minchillo, File)
By The Associated Press

Lamont says next week the state is likely to receive 69,000 tests, which provide results in about 15 minutes. The Democratic governor also says Connecticut will use a new contact tracing phone app developed by Google and Apple.

The program will keep track of people in close contact with a user’s phone. If someone tests positive, that person tells the app, which automatically notifies those people.

— llinois Gov. Pritzker to quarantine 2 weeks after contact with staffer who tested positive

— How can I volunteer for a COVID-19 vaccine study?

— The coronavirus is infecting a rising number of American children and teens in a trend authorities say appears driven by school re-openings, resumption of sports and play dates.

— University of Notre Dame president Rev. John I. Jenkins apologized for not wearing a mask after pictures surfaced online of him shaking hands and sitting shoulder-to-shoulder with people at a recent Rose Garden ceremony.

OKLAHOMA CITY — The Oklahoma Highway Patrol says a captain has become the first state trooper in Oklahoma to die of coronavirus.

The patrol spokeswoman Sarah Stewart says Capt. Jeffery Sewell of Atoka died Saturday at a hospital in Denison, Texas, where he had been treated for the virus for about three weeks.

The actual number of cases in Oklahoma is likely higher because many people have not been tested, and studies suggest people can be infected and not feel sick.

GUATEMALA CITY — Guatemala’s government says bars, theaters and its famed archaeological sites can reopen on Thursday after being closed for months because of the coronavirus.

The government says limits on attendance and other measures will be in place for areas where the coronavirus is still spreading at relatively high levels, including Guatemala City and most of the country’s municipalities.

Theaters, gyms and other venues, including restaurants in shopping centers, must limit attendance to one person per 10 square meters. That limit also affects churches, which had earlier been allowed to open.

The Central American nation gradually lifted restrictions in late July, although it only opened its borders and resumed full operations at the international airport less than two weeks ago.

CHICAGO — Illinois Gov. J.B. Pritzker will quarantine for two weeks after a member of his administration tested positive for the coronavirus.

The staff member had attended events with the first-term Democrat all last week, including in Chicago, Marion and Marseilles. The aide tested positive Monday after feeling symptoms. Pritzker and other administration members tested negative the same day.

Pritzker’s office says the government and the staff member were wearing masks during all interactions. According to his office, Pritzker will remain in isolation for 14 days and conduct news media briefings remotely.

His office says in a tweet on Tuesday the 71-year-old Naidu is asymptomatic and in good health. His wife, Usha Naidu, has tested negative and is in self-isolation.

India’s junior Railways Minister Suresh Angadi died last week, nearly two weeks after he was admitted to a New Delhi hospital after testing positive. He was the first federal minister and the fourth Indian lawmaker to succumb to the deadly virus.

NASHVILLE, Tenn. — The Tennessee Titans have suspended in-person activities through Friday after the NFL says three Titans players and five other personnel tested positive for the coronavirus.

The Titans played the Vikings in Minnesota last weekend. The Vikings also are suspending their in-person activities. The league says both teams are working with infectious disease experts to trace contacts and perform more tests.

A person familiar with the situation says all eight test results are confirmed positives, making this the first COVID-19 outbreak of the NFL season in Week 4. The Titans are scheduled to host the Pittsburgh Steelers on Sunday. However, the Titans are unable to practice until Saturday at the earliest.

ATHENS, Greece — Health inspectors in Greece say an emergency docking order for a cruise ship near Athens can be lifted after crew members suspected of the coronavirus tested negative.

The Maltese-flagged Mein Schiff 6, carrying more than 1,500 people, was rerouted and ordered to sail to the port of Piraeus after testing of the crew indicated 12 ship staff were positive but asymptomatic.

Gkikas Magiorkinis, a member of the government’s pandemic expert committee, says all 12 crew members tested negative, using rapid and confirmatory tests, along with 24 people in contact with them.

Officials at the Merchant Marine Ministry say the cruise ship would remain in Piraeus overnight before continuing its journey on Wednesday.

The vessel, operated by TUI Cruises, has 922 passengers and 666 crew. Passengers were given coronavirus tests before boarding.

BERLIN — German leaders are recommending limits on the number of people attending private parties in areas where infections spike.

Chancellor Angela Merkel consulted Tuesday with the governors of Germany’s 16 states on ways to prevent Germany’s infection figures from rising.

Merkel says officials agreed in places where more than 35 new infections per 100,000 residents are recorded in a week, the number of people attending gatherings at public or rented facilities should be limited to 50 and no more than 25 should attend those held in private homes.

Merkel says where infections hit 50 per 100,000 residents, those figures should be cut to 25 and 10, respectively. She stressed that the aim is to act “regionally, specifically and accurately.”

She added a second nationwide shutdown “absolutely must be prevented.”

ATKINS, Ark. — An Arkansas school district says its top leader has died from the coronavirus.

The Atkins School District says Superintendent Jody Jenkins died Tuesday due to complications from COVID-19. The district is about 50 miles northwest of Little Rock.

Jenkins announced on Sept. 13 that he had tested positive for the virus and had been hospitalized for the past several days.

Arkansas is requiring schools to be open five days a week for in-person instruction, although they can offer virtual or hybrid options along with the five-day option.

The Arkansas per capita coronavirus rate of 194 per 100,000 residents was the seventh highest in the nation, according to latest White House Coronavirus Task Force report.

St. PETERSBURG, Fla. — The Tampa International Airport says it will test passengers for coronavirus in the terminal.

The Florida airport and BayCare Health System will offer voluntary testing for any passenger departing from or arriving at the airport. The tests are open to anyone who has flown, or is flying within three days, and can show proof of travel.

Tampa international CEO Joe Lopano says the trial program will run the month of October with two types of tests for passengers: a $57 rapid antigen swab test and a $125 polymerase swab.

Airport officials say passengers will be encouraged to take the more expensive swab three days before departure. Results should arrive within 48 hours. The antigen test “offers an added layer of same-day reassurance” for travelers, they say.

Travelers with a positive result are highly encouraged to cancel all travel plans, quarantine and contact a doctor, BayCare officials say. Under law, BayCare is required to report all positive results to the Florida Department of Health.

However, Dr. Anthony Fauci, director of the National Institute of Allergy and Infectious Diseases, told ABC’s “Good Morning America” on Monday the move is “very concerning” and could lead to another outbreak. He says in a group setting, “particularly without masks, you’re really asking for trouble.”

CANNON TOWNSHIP, Mich. — A community near Grand Rapids, Michigan, has turned down thousands of dollars in state and federal aid related to the coronavirus epidemic.

The reason: Cannon Township says it doesn’t need it.

“The way we budget, and we have budgeted, we were ready for COVID ... and so we had to respectfully decline to take the money,” said Steve Grimm, the township supervisor.

The township board declined more than $140,000 from the federal government and will accept less than $1,000 from roughly $12,000 offered by the state, WOOD-TV reported.

Cannon Township is in Kent County, which has reported 9,181 confirmed cases and 166 deaths. Overall, Michigan has more than 122,700 cases and 6,731 confirmed deaths.

Juneau Public Media reported that more than 12,000 people in Alaska have joined Medicaid over the last six months. The program known in Alaska as DenaliCare and Denali KidCare covered 232,735 participants on Aug. 31. That’s nearly one in every three residents and most are women, children and young adults.

MOSCOW — Moscow authorities are extending school holidays by a week amid a surge of new coronavirus cases.

Mayor Sergei Sobyanin on Tuesday ordered all schools to go on holiday between Oct. 5-18 and urged parents to keep their children at home during this period.

“Children (account for) a significant share of infections, often asymptomatic,” Sobyanin said in an online statement. “When they come home, they easily transmit the virus to adults and elderly members of the family, who get sick more severely.”

Health officials on Tuesday reported 8,232 new virus cases, with 2,300 in Moscow -- the highest daily number in the Russian capital since late May. Russia currently has the fourth largest caseload in the world with over 1.16 million confirmed infections. It ranks 11th in the world with a reported 20,450 deaths.

Last week, officials asked the elderly to stay at home starting on Monday and requested employers to allow as many people as possible to work from home.

Russian President Vladimir Putin on Monday urged Russians to remain vigilant. “The fight against the epidemic is not over, it goes on. The risks remain,” Putin said.

MADRID — Spain’s government is providing four more months of furlough to support workers and companies affected by the economic fallout of the coronavirus pandemic.

The existing plan expires Wednesday and was designed when the country’s strict lockdown brought the economy to a standstill. But a second wave is already causing partial lockdowns in towns and neighborhoods across the country, most significantly in the economic hub of Madrid.

The new plan approved Tuesday by Spain’s Cabinet was agreed to by unions and business lobbies. It extends benefits until the end of January. Companies that can’t afford to keep either all or part of the workforce due to virus outbreaks can apply for tax cuts under the pledge to bring employees back for at least half a year. The government will keep paying most of the salary of the workers sent home.

Some 600,000 people remain under the plan that began in March, according to the government. Labor Minister Yolanda Díaz says, “If we can save the fall and winter, we will fully enter recovery times.”

With infections nearing 750,000 and the confirmed death toll more than 31,400, the second wave has hit Madrid, which has a rate of infection 2.5 times higher than the national average.