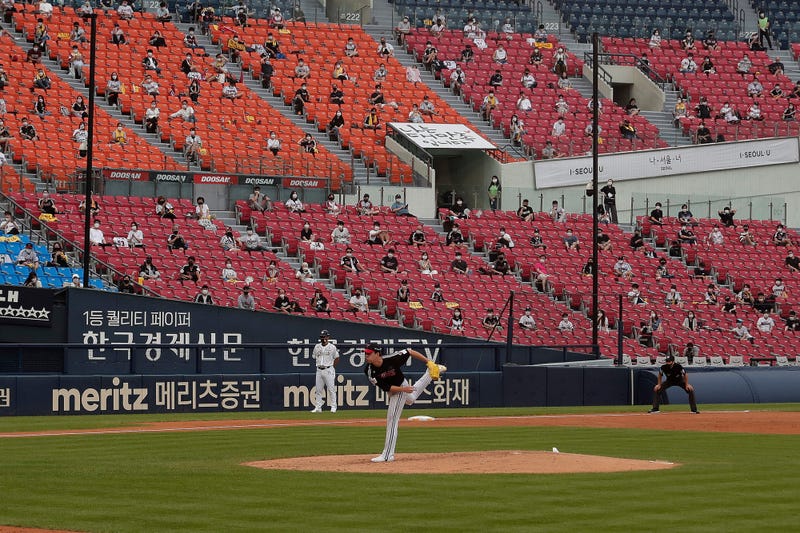 The list was created for players who either test positive for COVID-19 or have been in close contact with an infected person.

Coleman has not missed a regular-season game since the 2016 season. Nauta appeared in six games for Detroit last season.

The LPGA Tour’s return to golf has yielded two positive tests for the coronavirus out of the 466 given to players and caddies before they traveled and when they arrived in Ohio for the LPGA Drive On Championship.

The LPGA says Marina Alex had no symptoms when she tested positive before leaving for Inverness. Following 10 days of quarantine, she is expected to return next week at the Marathon Classic. The tour says one caddie also tested positive and did not travel. The caddie was only to scheduled to work the first event.

Gaby Lopez has the positive test result out of the 233 given to players and caddies at the tournament.

The LPGA says one player from the Symetra Tour, Fatima Fernandez Cano, tested positive and withdrew from last week’s tournament in Michigan. The tour says she has recovered and has been cleared to play.

Defensive backs Siran Neal and Dane Jackson both tested positive Thursday, upping the team’s total to five since rookies reported on July 21. Neal is a second-year player and Jackson is a rookie seventh-round draft pick.

The Bills said the decision to send players home was made as “a disciplined, proactive and preventative approach” in a bid to eliminate additional cases.

The Bills did not provide a timeline as to how long rookies would continue working remotely.

The Las Vegas Raiders have placed backup running back Devontae Booker on the new reserve/COIVD-19 list.

The list is being used for any player who tests positive for the coronavirus or has been quarantined after having been in close contact with someone who has been infected.

Booker is the first player the Raiders have placed on the list.

The list is being used for any player who tests positive for the coronavirus or has been quarantined after having been in close contact with someone who has been infected.

Wilson is the second player the Niners have placed on the list. Receiver Richie James Jr. was placed on it earlier in the week.

Wilson had 27 carries for 105 yards and four TDs last season.

Cleveland Browns punter Jamie Gillan has been placed on the NFL’s reserve/COVID-19 list, which means he’s either tested positive for the virus or been in close contact with an infected person.

Gillan is the third player placed on the list, joining running back Dontrell Hilliard and safety Jovante Moffatt.

The Browns signed Gillan as an undrafted free agent before training camp last season and the 23-year-old became a fan favorite with his long air and thick Scottish accent. He wore a kilt to Cleveland’s final home game last season.

Gillan set a club single-season record by averaging 41.6 net yards per kick in 2019 as a rookie. He also placed 28 punts inside the 20.

The sideline area college football teams use to congregate will be extended by 20 yards this season and only one captain from each team will be permitted to participate in the pregame or overtime coin toss.

NCAA playing rules oversight committee announced alterations in football and other sports to accommodate for COVID-19 concerns this coming season.

The team sideline area currently extends from one 25-yard line to another. Those areas will now span from 15 to 15. Currently, as many as four team captains can participate in the coin toss. That has been reduced to one and only two officials will be allowed to participate.

Georgia Tech has moved this season’s home game against Notre Dame to its campus stadium, citing uncertainty over scheduling because of the coronavirus pandemic.

The Atlantic Coast Conference announced a new 11-game scheduling format that includes 10 conference games, with Notre Dame joining as a full-time member for the 2020 season.

Georgia Tech was already set to play Notre Dame at Atlanta’s 75,000-seat Mercedes-Benz Stadium on Nov. 14. While that game remains a part of the Yellow Jackets’ revised ACC schedule, the uncertainty over a playing date prompted the school to move the contest to its regular home venue, 55,000-seat Bobby Dodd Stadium.

Milwaukee Bucks coach Mike Budenholzer says guards Eric Bledsoe and Pat Connaughton won’t play Friday against the Boston Celtics after both players arrived late to Florida because they had tested positive for the novel coronavirus.

Budenholzer hasn’t announced a timeline for when either player could appear in a game. He says getting them at least a couple of five-on-five practice sessions and some three-on-three work will be important for their conditioning and developing a rhythm.

Budenholzer says it’s a big hurdle to overcome when everybody else has already put in 10 to 14 days of work.

Season tickets will not be available for Dallas Cowboys games this season.

The Cowboys announced that due to NFL policies, government and CDC guidelines on the COVID-19 pandemic, capacity at AT&T Stadium will be limited.

They also could decline to buy single-game tickets for the 2020 season but “will still retain tenure, seat location and associated benefits for the 2021 season and beyond.”

Any season ticket holders who have paid their invoice fee will have the option to apply the credit to future ticket purchases or receive a refund.

The Cowboys also said any fans who purchased single-game tickets from an official NFL licensed channel for games this season will be receiving communication from the point of purchase regarding cancellations of tickets and how to obtain a credit or refund.

The Phillies have received the results of Wednesday’s testing, and while no players tested positive for COVID-19 two staff members did test positive.

All activity at Citizens Bank Park has been canceled until further notice.

Rookie running back Malcolm Perry is among several Miami Dolphins players who have donated convalescent plasma after recovering from COVID-19.

“Being able to give back to people who weren’t fortunate enough to react the same way you did to the virus and give back to the community was important,” the former Navy star said in a statement released Thursday by the team.

People who have recovered from the coronavirus have developed antibodies to the virus that remain in the plasma portion of their blood. By transfusing plasma from a person who has recovered from COVID-19 into a patient still fighting the virus, it can boost their immune system and potentially help them recover.

There has been a spike in the number of Rutgers’ football players who have tested positive for COVID-19.

New Jersey Health Commissioner Judy Persichilli said the number is now 15 and noted that even smaller gatherings can lead to positive tests.

Rutgers halted all in-person team activities and quarantined the entire program this past weekend after learning six people associated with the program had tested positive.

Sevilla says no other players have tested positive for the coronavirus ahead of its Europa League match against Roma.

The Spanish club announced on Wednesday that Serbian player Nemanja Gudelj tested positive for COVID-19 and was isolated from the rest of the squad.

Sevilla says players and club employees were tested again and no positive results were reported.

The club says training will resume with individual sessions.

Players and employees will continue to be tested before the team’s trip to Germany for the match.

The round-of-16 game is scheduled to be played on Aug. 6. The team plans to travel on Tuesday.

Napoli president Aurelio De Laurentiis is concerned about his club traveling to face Barcelona in the Champions League amid a recent spike in coronavirus cases in Spain.

De Laurentiis says “I hear a lot of perplexity and fear coming from Spain and they’re acting like nothing is wrong. What does it take to say, ‘Don’t go to Barcelona but rather go to Portugal, Germany or Geneva?’”

The Barcelona-Napoli game is scheduled for Aug. 8. The first leg of the round-of-16 encounter finished 1-1 in Naples in February. The winner will advance to the quarterfinals in Lisbon, Portugal.

The Napoli president says “if they’ve decided to play the Champions League in Portugal and the Europa League in Germany, I think we can go to Portugal or Germany for the round of 16. I don’t understand why it should stay in a city that has a really critical situation.”