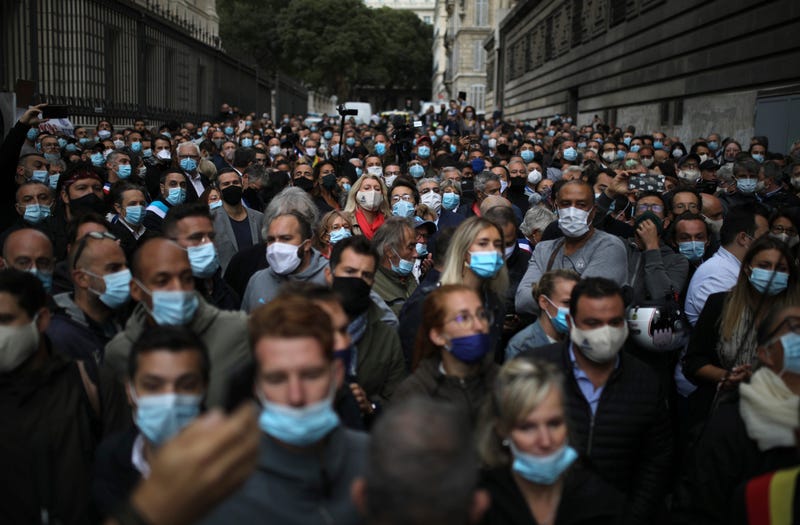 Photo credit Angry restaurant and bar owners demonstrate in Marseille, southern France, Friday Sept. 25, 2020 to challenge a French government order to close all public venues as of Saturday to battle resurgent virus infections. The protesters, and local officials in France's second-biggest city, are also threatening legal action, to try to block the order via the courts. They argue that Marseille's virus case rise has been stabilizing, and that the central government in Paris is unfairly singling out Marseille for the toughest virus measures in the nation. (AP Photo/Daniel Cole)
By The Associated Press

LANSING, Mich. — Michigan’s movie theaters and other venues can reopen in two weeks after nearly seven months of closure during the coronavirus pandemic, and the limit on how many people can attend funerals and other indoor events is being raised.

Gov. Gretchen Whitmer also issued an order Friday requiring the vast majority of students to wear masks in classrooms as of Oct. 5, and mandating that public and private schools publish information on coronavirus cases.

Indoor cinemas, performance venues, arcades, bingo halls, bowling centers, indoor climbing facilities and trampoline parks can reopen starting Oct. 9. A 10-person cap on indoor events has been revised to instead allow 20 people per 1,000 square feet or 20% of fixed seating capacity, up to a maximum of 500 people.

— French Open limits fans to 1,000 per day as cases spike in Paris

— Gov. Ron DeSantis lifted all restrictions on restaurants and other businesses in Florida in a move to reopen the state’s economy despite the spread of the coronavirus.

— Minnesota halts coronavirus study after reports of intimidation. The survey teams were going to 180 neighborhoods to offer free testing for the virus and for antibodies.

SALEM, Ore. — The Oregon Health Authority has reported 457 new confirmed coronavirus cases, the state’s largest daily total since the the start of the pandemic.

Officials on Friday attributed the rise in cases to Labor Day celebrations, the return of college students to campus and the interruption of testing during recent wildfires in Oregon.

Health experts had said last week that the rate of virus transmission in Oregon was in a “downward trend,” but case numbers have been rising this week.

More than 32,300 people have tested positive for the coronavirus in Oregon since the start of the pandemic. The death toll is 542.

WASHINGTON — The nation’s top infectious disease expert is cautioning people not to let pandemic fatigue weaken efforts to keep the coronavirus from spreading.

Dr. Anthony Fauci says that “people are exhausted from being shut down” and some give up on doing things that contain the virus.

The head of the U.S. National Institute of Allergy and Infectious Diseases made the comment Friday in a podcast with a medical journal editor.

Fauci urges people to remember that “there is an end to this” and “we just have to hang in there a bit” as researchers work on a vaccine. Fauci says that “what we don’t want to have to do is to shut down again” if cases really spike.

Officials said Friday that about 400 of the more than 7,000 tests dating back to July at the Doctors Care clinic chain were positive for infections.

The delay in testing both prevents officials from tracing any contacts a person testing positive had and from getting an accurate picture of the spread of the virus. Labs are required to report both positive and negative tests to the state within 24 hours.

On Tuesday, state officials said the Augusta University Healthcare system in Georgia failed to report the results of 15,000 coronavirus tests on South Carolina residents from May to September. About 2,000 of those were positive.

Four more people died, pushing the state’s death toll from the virus to 1,303.

Data from state health and education departments released Friday indicate the virus is circulating in schools and nursing homes.

The report says 6,917 children under age 17 in Iowa have tested positive for the virus, an increase of more than 800 in a week. It also shows 3,372 educators testing positive.

The state also reports 50 nursing homes in Iowa have an outbreak of the virus, with more than 1,000 residents testing positive currently.

TOPEKA, Kan. — Kansas reported Friday that it had more than 1,300 new coronavirus cases over two days, and most of the biggest spikes over the past two weeks occurred in rural counties in the central and western parts of the state.

The state Department of Health and Environment said Kansas has had 56,592 confirmed and probable coronavirus cases, an increase of 1,366 or 2.5% from Wednesday.

The health department also reported an additional 11 COVID-19-related deaths over two days to bring the pandemic total to 632. Deaths continued to represent about 1.1% of the reported cases.

Of the 10 counties with the biggest increases in cases per 1,000 residents, eight had fewer than 7,200 residents, and all were in western or central Kansas.

The state’s Department of Corrections currently lists seven prison facilities as coronavirus “hot spots,” a designation that means at least 20% of the inmates within celled housing units test positive or 15% of inmates test positive within open-bay housing units.

The Oklahoma Department of Corrections reported 1,357 active coronavirus cases and 3,262 total cases as of Thursday with two confirmed COVID-19-related deaths and seven other inmate deaths possibly due to the virus, pending autopsies by the state medical examiner.

The department also said the deaths of three staff members may be COVID-related, pending autopsies.

The program allowing restaurants to seat customers on sidewalks and parking spaces has been seen as a lifeline for cash-strapped businesses trying to survive the pandemic. More than 10,000 restaurants are taking part in the program.

The mayor told WNYC public radio he wants the model to become “part of the life of New York City for years and generations to come.”

GENEVA — The World Health Organization’s emergencies chief calls the nearly 1 million deaths from the coronavirus “terrible” and more stringent measures are needed to stop it.

Ryan also called for greater investment into WHO’s fund to develop therapeutics, tests and vaccines. The agency says $35 billion is needed to develop the necessary tools to end the acute phase of the pandemic.

TORONTO — Canada’s most populous province is making bars and restaurants shut down earlier in a bid to curb rising coronavirus cases in Ontario.

The government says bars and restaurants will be required to close at midnight, except for takeout and delivery, and will have to stop serving alcohol by 11 p.m. The province is also ordering all strip clubs to close. The move comes after the province changed the rules for social gatherings last week, lowering the number of people permitted at outdoor events to 25 and indoor events to 10.

Ontario reported 409 new cases on Friday and one new death related to the virus.

ATHENS, Greece — Greek authorities are closing Athens convenience stores, kiosks and other shops at midnight in a bid to stop alcohol-fueled outside parties linked to the spread of the coronavirus.

Health officials says the ban will apply from Friday night to Oct. 4. Bars and restaurants are already closing at midnight in the greater Athens area. But many people buy drinks from convenience stores and party in squares, pedestrian areas and other public areas and ignore distancing rules.

The measure also will apply to the islands of Mykonos and Lesbos.

The country of 10 million recorded 286 new cases and three deaths in the past 24 hours. The total number of confirmed cases is nearly 17,000 and 369 deaths.

That comes more than five months after the Kingdom imposed a travel ban on Pakistanis to contain the spread of coronavirus.

However, the ministry says Pakistani travelers will have to get coronavirus tests 48 hours before leaving for Saudi Arabia, which has 331,857 confirmed cases and 4,599 deaths.

TOKYO — Japan will lift the entry ban for all foreign visitors with residential permits, except for tourists, starting next month.

Prime Minister Yoshihide Suga says it is “indispensable” to revitalize the economy. The government is expected to limit daily entry to about 1,000.

Japan will launch other subsidy programs and discounts to lure people back to entertainment, restaurants and other cultural events.

The easing of foreign travels still requires visitors to have permits to stay for at least three months for medical, cultural and athletic activities. There will be permits for business trips for shorter visits.

The announcement Thursday came one day after the state reported 137 new confirmed cases — its highest number since the pandemic began.

However, the governor says one place the state is not seeing large numbers of cases emerge is from restaurants. Gordon says he wants to relax some restrictions there to ensure those businesses can adjust to the coming fall and winter, when outdoor dining will be more difficult.

There have been 4,488 confirmed cases and 50 deaths in Wyoming.

RICHMOND, Va. — Virginia Gov. Ralph Northam says he and his wife have tested positive for the coronavirus.

Northam says he isn’t showing symptoms. He and wife Pam, who has mild symptoms, plan to isolate for the next 10 days while working remotely, according to a statement from his office.

The Democrat, the country’s only governor who is also a doctor, has previously been criticized by some Republican lawmakers who say his restrictions aimed at slowing the spread of the virus are too stringent.

Northam said in a statement his test result shows the virus is “very real and very contagious.”

BISMARCK, N.D. — Republican Gov. Doug Burgum of North Dakota rescinded a quarantine order just a day after it was issued, despite the state having the highest per capita rate of new coronavirus cases in the nation.

Burgum took a quick step back from the order that would have enforced a 14-day quarantine for close contacts of coronavirus cases. On Wednesday, he described the expanded order as bringing the state in line with guidance from the CDC.

But in a statement Thursday announcing the order was rescinded, Burgum says the state needs a “light touch” from government in managing the virus.

North Dakota ranks first with 659 new cases per 100,000 people over the past two weeks, according to Johns Hopkins University. Burgum says he plans to work with local communities to find mitigation strategies.

Rutte says his administration is seeking advice from health experts about whether more restrictions are necessary to rein in the virus in the country’s main cities.

Asked if that meant a new lockdown for Amsterdam, Rotterdam and The Hague, Rutte said: “I don’t want to speculate about what that could be.” The Netherlands relaxed most lockdown measures on July 1.

The Netherlands has recorded a string of record daily increases in positive tests in recent weeks and hospital and intensive care unit admissions are on the rise.

PARIS — The French Open tennis event has reduced fans to 1,000 per day because of worsening coronavirus cases in Paris.

Organizers have repeatedly scaled back their ambitions for the Grand Slam event as virus cases increased. They’d been planning for 11,500 fans per day three weeks ago, then 5,000 and now to only 1,000.

France reported more than 16,000 new cases on Thursday, a new daily high, in part because of ramped-up testing. New influxes of sick patients are adding pressure on hospital ICU units.

France, hard hit by the coronavirus early in the pandemic, has more than 536,000 total confirmed cases. It ranks eighth in the world with 31,500 confirmed deaths.