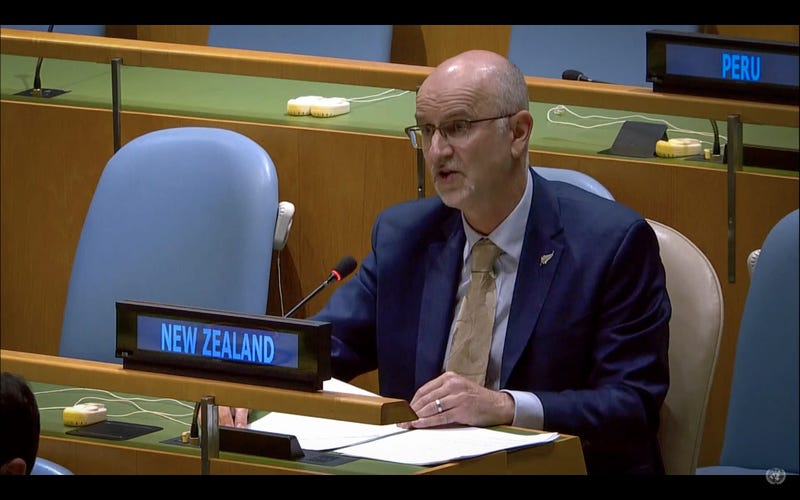 Photo credit In this image from UNTV video, Craig John Hawke, permanent representative of New Zealand to the United Nations, speaks in person during the 75th session of the United Nations General Assembly, Tuesday, Sept. 29, 2020, at U.N. headquarters. (UNTV via AP)
By The Associated Press

A full week into the annual United Nations gathering of world leaders, here’s something new: a speech delivered live.

More than 170 heads of state and other senior officials have delivered their addresses via prerecorded video as a precaution against the coronavirus pandemic.

After beginning with comments in the local Maori language, the ambassador called for unity against COVID-19 in a fractured world.

He said, “To defeat this virus globally, we all need to be at our collective best.”

He also stressed the urgency of action to slow global warming, a major concern for many island states, saying that “there will be no vaccine against climate change.”

He finished up with a few more words in Maori, then translated: “With your food basket and my food basket, the people will thrive.”

El Salvador President Nayib Bukele has renewed his criticism of the stodgy machinations of the U.N. General Assembly, noting that the only progress in the past year — sending prerecorded video speeches — was driven by the coronavirus pandemic.

In his speech Tuesday, Bukele said one year ago, he warned the General Assembly it needed to change its format or risk becoming irrelevant. He got attention last year when he paused his speech to take a selfie, saying more people would share the photo than hear his words.

In his message Tuesday, he acknowledged that the format had changed, but only because of COVID-19.

Bukele questioned what good the General Assembly had done to address the pandemic. He said international aid had been critical for El Salvador, but it had been bilateral.

A top Myanmar official is accusing a militant group and its supporters of hampering the repatriation of over 700,000 Rohingya Muslims who fled a military crackdown in 2017 and are now in camps in Bangladesh.

Kyaw Tint Swe, Myanmar’s minister for the office of the state counselor, also said the militant group — the Arakan Rohingya Salvation Army, known as ARSA — and another insurgent group, the Arakan Army guerrilla force, have used Bangladesh as a sanctuary in their separate campaigns against the government.

He delivered a prerecorded address Tuesday to the U.N. General Assembly’s annual meeting of global leaders, being held virtually this year because of the COVID-19 pandemic.

The long-simmering Rohingya crisis exploded on Aug. 25, 2017, when Myanmar’s military launched what it called a clearance campaign in northern Rakhine state in response to what it called an attack by ARSA. The campaign led to the exodus of Rohingya Muslims to Bangladesh and to allegations that government security forces committed mass rapes and killings and burned thousands of homes.

More recently, the government has been embroiled for more than a year in a conflict with another group — the well-trained, well-armed Arakan Army.

Tint Swe called for strengthened efforts “to prevent ARSA and its supporters in the camps ... from hampering the bilateral repatriation process through threats, violence or other illegal conduct." Such activities, he said, "pose a risk to both Bangladesh and Myanmar.”

He said Myanmar wants to be a good neighbor to Bangladesh and remains committed “to receive verified returnees in a voluntary, safe, and dignified manner” as called for in a November 2017 bilateral agreement. But he stressed that “pressure tactics will be futile.”

Tint Swe also criticized those in the international community who have made “grave accusations” against Myanmar and found it “guilty” without due process and “judicial probing of real evidence.”

Two days earlier, an independent commission established by Myanmar’s government concluded there are reasons to believe that security forces committed war crimes in counterinsurgency operations against the Rohingya — but not genocide.

Israeli Prime Minister Benjamin Netanyahu accused the Lebanese militant group Hezbollah of maintaining a “secret arms depot” in a residential neighborhood of Beirut, warning it could cause another tragic explosion in the Lebanese capital.

In an address to the U.N. General Assembly on Tuesday, Netanyahu showed maps purportedly showing the missile depot’s location next to a gas station and residential housing. He also showed what he said was a picture of the entrance to the depot.

“Here’s where the next explosion will take place, right here,” he said.

Addressing the Lebanese people, he said: “You’ve got to act now, you’ve got to protest this, because if this thing explodes, it’s another tragedy. ... You should tell them, ‘Tear these depots down.’”

Last month, a warehouse filled with nearly 3,000 tons of ammonium nitrate exploded in Beirut’s port, killing nearly 200 people, wounding thousands and causing widespread destruction in the capital. The ammonium nitrate had been stored there for several years.

No one has yet been held accountable for the blast, which appears to have been triggered by an accidental fire.

Germany’s top diplomat says justice for victims of conflict is essential and is vowing that German courts will ensure that perpetrators of the worst crimes against humanity are held accountable.

Foreign Minister Heiko Maas said he also backed U.N. investigations into alleged crimes “with all our might,” and stressed that Germany wasn’t only seeking justice for crimes during the nine-year conflict in Syria.

“Those who don’t clearly distinguish between perpetrators and victims, who blur the line between right and wrong, shake the very foundations of our rules-based order ... jeopardize our peaceful coexistence itself,” he said.

Maas singled out “those who stand in the way of the work of institutions such as the International Criminal Court,” a swipe at the United States, which strongly opposes the international war crimes tribunal.

He also referred to veto-wielding U.N. Security Council members who use vetoes and “prevent its urgently needed reform with constantly new delay tactics." That is an almost certain reference to Russia and China.

The German minister also called on Russia to investigate the poisoning of opposition leader Alexei Navalny, stressing that the EU reserves the right to impose sanctions.

He warned Belarus President Alexander Lukashenko that his refusal to support a national dialogue and determination “to tread the path of violence and suppression ... must also have consequences,” which are being discussed in the EU.

Maas reiterated Germany’s determination to remain a party to the 2015 nuclear deal with Iran, warning that its demise would bring Iran “closer to getting the atomic bomb.”

Maas, who is in quarantine after being exposed to someone who tested positive for COVID-19, also said that as the world’s biggest exporter of pharmaceutical products, Germany is committed “to distributing potential vaccines and medicines against COVID-19 in a fair way -- as a global public good.”

The United Arab Emirates has defended its decision to normalize ties with Israel and criticized interference in Arab affairs, an apparent reference to its foes Iran and Turkey.

Emirati Foreign Minister Sheikh Abdullah bin Zayed Al Nahyan, the brother of Abu Dhabi’s powerful crown prince, made the remarks during a speech Tuesday before the U.N. General Assembly. He proclaimed that the UAE’s decision announced in August to formalize ties with Israel froze a controversial Israeli plan to annex occupied territory in the West Bank claimed by Palestinians.

Israel’s prime minister, however, has insisted that plans have only been temporarily suspended.

“We hope this peace accord will provide the opportunity for the Palestinians and the Israelis to re-engage in negotiations to achieve peace,” Al Nahyan said.

Palestinians have blasted the deals signed by the UAE and Bahrain with Israel, which were brokered by the United States, as acts of betrayal. President Mahmoud Abbas used his U.N. speech on Friday to stress that his government has not given a mandate to anyone to speak or negotiate on behalf of the Palestinian people. Abbas said that the only path for lasting peace is an end to the Israeli occupation and creation of a Palestinian state.

The Emirati foreign minister also warned against what he said were “the expansionist ambitions of some countries in the region." Though he stopped short of naming any countries, the UAE has long accused Iran, Turkey and Qatar of meddling beyond their borders in the affairs of other states.

The UAE is part of a quartet of Arab states that have boycotted Qatar since 2017, primarily for its backing of Islamist groups like the Muslim Brotherhood, which the UAE brands a terrorist group and deems a political and security threat.

In an apparent dig at Turkey and Iran, Al Nahyan said that tensions in Yemen, Syria, Libya and Iraq are related to “blatant interference in Arab affairs made by states ... that have historical delusions of restoring their domination and colonial rule over the Arab region and the Horn of Africa.” He called on Iran specifically to stop the development of its ballistic missile programs.

The UAE, a country of about 9 million people with more than 1 million Emirati citizens, is militarily involved in Yemen as a key partner of the Saudi-led coalition fighting the Iran-backed Houthis. The UAE also backs a military commander in Libya’s east who’s a rival to the allied militias in Tripoli that have backing from Turkey and Qatar.