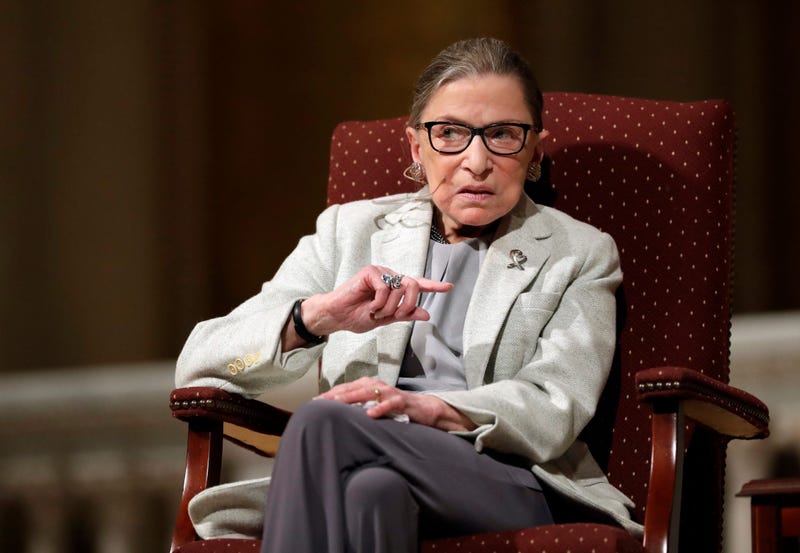 Former President Barack Obama is calling Ruth Bader Ginsburg “a relentless litigator and an incisive jurist” who “inspired generations, from the tiniest trick-or-treaters to law students burning the midnight oil to the most powerful leaders in the land.”

Obama issued a statement Friday after Ginsburg's death from cancer complications at age 87. He says Ginsburg should be remembered for fighting to the end of her life, through her cancer “with unwavering faith in our democracy and its ideals.”

The former president says Republicans, who in 2016 refused to consider his nominee for a court vacancy eight months before an election, must follow the same principle now. The 2020 election is a month and a half away.

He says a basic principle of the law and everyday fairness “is that we apply rules with consistency, and not based on what’s convenient or advantageous in the moment.”

Obama noted that early voting in the presidential contest has already begun in some states and said questions pending before the court and expected to reach it in the coming years “are too consequential to “to be filled through anything less than an unimpeachable process.”

At least three Republican senators suggested before Supreme Court Justice Ruth Bader Ginsburg’s death that they’d be opposed to voting late this election year on replacing her with a nominee by President Donald Trump.

But one of them, South Carolina Sen. Lindsey Graham, has already reversed himself.

Graham told The Atlantic magazine in 2018: “If an opening comes in the last year of President Trump’s term and the primary process is started, we’ll wait for the next election.”

But this past May, he expressed a different opinion. He told reporters there was a distinction between 2020 and 2016, when Senate Majority Leader Mitch McConnell blocked President Barack Obama’s pick for the Supreme Court, Merrick Garland. He said the difference is that now the presidency and Senate are held by the same party.

GOP Sen. Susan Collins of Maine told The New York Times earlier this month that she wouldn’t favor voting on a new justice in October, saying, “I think that’s too close. I really do.”

Hours before Ginsburg’s death was announced Friday, Alaska Public Radio asked GOP Sen. Lisa Murkowski if she’d vote to confirm a high court nominee before Inauguration Day. She told them, “I would not vote to confirm a Supreme Court nominee. We are 50 some days away from an election.”

Graham, Collins and Murkowski all issued statements Friday after Ginsburg’s death that praised her but did not mention whether they’d favor voting on a Trump pick to replace her.

President Donald Trump says in a statement that the late Supreme Court Justice Ruth Bader Ginsburg was a “titan of the law."

Ginsburg died Friday at her home in Washington of complications from metastatic pancreatic cancer. Trump was speaking at campaign event for more than an hour after the nation learned of her death and later said he had been unaware of the news during his speech.

In a statement posted on Twitter, Trump said Ginsburg was “renowned for her brilliant mind and her powerful dissents at the Supreme Court” and she demonstrated “that one can disagree without being disagreeable toward one’s colleagues or different points of view.”

Trump did not mention whether he’d nominate a new justice, though he had boasted in the speech that the next presidential term could offer him as many as four appointments to the nine-member court.

The presidential election is 46 days away.

Schumer, a Democrat, tweeted Friday, “The American people should have a voice in the selection of their next Supreme Court Justice. Therefore, this vacancy should not be filled until we have a new president.”

That is precisely what the Republican McConnell said in February 2016 the night conservative Justice Antonin Scalia died.

That year the presidential election was nearly nine months off, but the Kentucky Republican refused to allow a vote on then-President Barack Obama’s choice to replace Scalia, Merrick Garland. Trump ended up replacing Scalia with Neil Gorsuch, a conservative.

This year’s election day is less than seven weeks away.

Former President Bill Clinton, who nominated Ruth Bader Ginsburg for the Supreme Court in 1993, is calling her “one of the most extraordinary justices ever to serve."

In a statement late Friday after her death was announced, Clinton said she was “a brilliant lawyer with a caring heart, common sense, fierce devotion to fairness and equality, and boundless courage in the face of her own adversity.”

Ginsburg’s appointment was the first high court pick by a Democrat in 26 years, and Clinton said her years on the court “exceeded even my highest expectations when I appointed her.”

Just as notable, he said, were her dissents, “especially her ringing defense of voting rights and other equal protection claims” that he said “reminded us that we walk away from our Constitution’s promise at our peril.

Endangered Republican Sen. Kelly Loeffler of Georgia says President Donald Trump has “every right to pick a new justice before the election.”

Loeffler says that “Our country's future is at stake” and that she looks forward “to supporting a strict constructionist who will protect the right to life & safeguard our conservative values.”

Loeffler was tapped by Republican Gov. Brian Kemp to fill the Senate seat of Johnny Isakson, who resigned at the end of 2019 over health problems. She is running in a special election in November to serve the remaining two years of Isakson's term.

The Republican-led Senate in 2016 refused to hold a hearing on President Barack Obama’s nomination to replace Antonin Scalia on the Supreme Court after he died that February. Leader Mitch McConnell said then that it wasn’t fair because it was an election year but said Friday that he would vote on Trump's pick to replace Ginsburg.

Moderate Republican Sen. Lisa Murkowski of Alaska said in an interview hours before the death of Justice Ruth Bader Ginsburg was announced that she “would not vote to confirm” her replacement before the next president is inaugurated.

Murkowski’s comment appeared to put her at odds with McConnell, who will need at least 50 votes to push a Trump nominee through the Senate, plus a tie-breaking vote by Vice President Mike Pence.

Republicans have a 53-47 majority. The presidential and congressional elections are Nov. 3, and Inauguration Day is Jan. 20.

In her interview, Murkowski noted that when Justice Antonin Scalia died in February 2016, McConnell refused to hold a vote on then-President Barack Obama’s choice to replace him, Merrick Garland.

Murkowski added that Scalia’s death occurred “too close to an election, and that the people needed to decide. The closer you get to an election, that argument becomes even more important.”

Biden noted that the Republican-led Senate in 2016 refused to consider President Barack Obama’s Supreme Court nominee, Merrick Garland, to fill the vacancy created when Justice Antonin Scalia died in February of that year. Biden said that Scalia died about with “almost 10 months to go” before the election and that Senate Majority Leader Mitch McConnell cited it being an election year as the reason a hearing shouldn't take place.

Biden says he hopes the coming days are about “the loss of the justice and her enduring legacy.” Biden chaired the Senate Judiciary Committee in 1993 when Ginsburg was confirmed to the high court.

Democratic Sen. Dianne Feinstein says the Senate should not consider a replacement for the late Supreme Court Justice Ruth Bader Ginsburg until after Inauguration Day.

The veteran California lawmaker on Friday called Ginsburg a trailblazer for women, “a once-in-a-generation legal mind and a passionate champion for the rights of all Americans.’’

Feinstein, the top Democrat on the Senate Judiciary Committee, says Republican Senate Majority Leader Mitch McConnell “made his position clear in 2016” when he refused to hold a confirmation hearing for President Barack Obama's Supreme Court pick during an election year.

Feinstein says, “To jam through a lifetime appointment to the country’s highest court – particularly to replace an icon like Justice Ginsburg – would be the height of hypocrisy.”

When a president nominates someone to the Supreme Court, the nomination is referred to the Senate, where the Senate Judiciary Committee holds a hearing in which the nominee will provide testimony and respond to questions from members of the panel. The committee then votes on whether to refer the nomination to the full Senate for consideration.

Cruz said Friday shortly after Ginsburg's death was announced that Trump needs to move quickly. He says a Supreme Court that is split 4-4 “cannot decide anything” and under that scenario, “I think we risk a constitutional crisis.”

The Texas senator is a member of the Senate Judiciary Committee, which will vote on Ginsburg’s successor.

He called on Trump to nominate a “principled constitutionalist with a proven record.”

Cruz is also among 20 individuals Trump recently added to his list of potential Supreme Court nominees.

The Republican-led Senate in 2016 refused to hold a hearing on President Barack Obama's nomination to replace Antonin Scalia on the Supreme Court after he died that February. Leader Mitch McConnell said then it wasn't fair because it was an election year.

Some other GOP senators in competitive reelections initially did not address whether the Senate should vote on Trump’s pick. Ginsburg died Friday of complications from cancer at age 87.

Senate Majority Leader Mitch McConnell says the GOP-run Senate will vote on Trump’s selection, whomever it is, even though it’s an election year — the reason he gave for not voting on President Barack Obama’s court pick in 2016.

But four other Republican senators facing tough reelection fights skirted the question of whether the Senate should vote on a Trump pick.

Maine Sen. Susan Collins called Ginsburg a "trailblazer for women’s rights, a fierce champion for equality, and an extremely accomplished American who broke countless barriers in the field of law.

Ginsburg died Friday of complications from cancer at the age of 87. The news of her death broke shortly after Trump began to address a campaign rally in Minnesota.

Trump spoke obliquely about future Supreme Court vacancies but did not mention the late justice during nearly two hours of remarks.

Trump told reporters after the rally as he headed back to Air Force One that he didn’t know Ginsburg had died.

Ginsburg was a key liberal vote on the court, and her death leaves a vacancy that will spur a fight over her replacement with less than seven weeks before the election.

Republican Senate Majority Leader Mitch McConnell declined to hold confirmation hearings for President Barack Obama's court pick to replace Antonin Scalia when the justice died in February 2016. He cited the reason as it being an election year. But McConnell said Friday that the Senate will vote on whomever Trump picks to replace Ginsburg.

Former President Jimmy Carter says he and his wife, Rosalynn, are saddened by the death of Supreme Court Justice Ruth Bader Ginsburg, praising her as a “beacon of justice” over a long and remarkable career.

Ginsburg, the court’s second female justice, died Friday at her Washington home of complications from metastatic pancreatic cancer. She was 87.

Carter said in a statement that he was proud to have appointed Ginsburg to the U.S. Court of Appeals in 1980 — a step taken long before her 1993 selection for the nation’s highest court by another Democratic president, Bill Clinton.

House Speaker Nancy Pelosi says Supreme Court Justice Ruth Bader Ginsburg’s death is “an incalculable loss for our democracy and for all who sacrifice and strive to build a better future for our children.”

The Democratic leader said Friday that Congress must ensure that the person who replaces Ginsburg on the court “upholds her commitment to equality, opportunity and justice for all.”