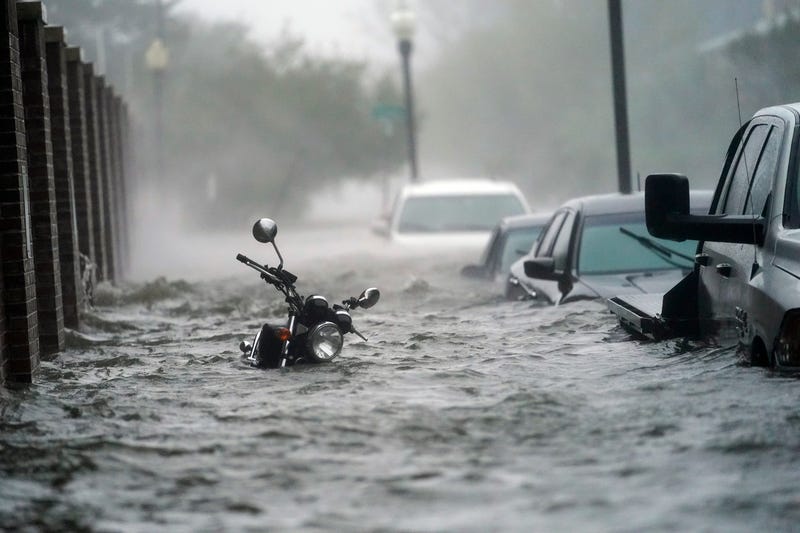 Photo credit Flood waters move on the street, Wednesday, Sept. 16, 2020, in Pensacola, Fla. Hurricane Sally made landfall Wednesday near Gulf Shores, Alabama, as a Category 2 storm, pushing a surge of ocean water onto the coast and dumping torrential rain that forecasters said would cause dangerous flooding from the Florida Panhandle to Mississippi and well inland in the days ahead.(AP Photo/Gerald Herbert)
By The Associated Press

PENSACOLA, Fla. — With Hurricane Sally moving slowly and lashing the Gulf Coast with wind and rain, officials say worst may be yet to come.

Escambia County Sheriff David Morgan says thousands of people in the communities he serves around Pensacola, Florida, will need to be evacuated from rising water in the coming days. Morgan said there are entire communities they’ll have to evacuate. He says deputies have already rescued more than 40 people late Wednesday morning, including a family of four that was in a tree and was brought to safety with a high-water vehicle.

McEnany didn’t have details on which officials the president had spoken with as of Wednesday morning but said “it’s safe to say the White House has been in active contact with all of these governors.”

Mayor Tony Kennon says between 50 and 60 people were rescued and are staying in makeshift shelters Wednesday morning.

Kennon also said there are people they haven't been able to get to because of high water. But he said they're safe in their homes and will be rescued as soon as the water recedes.

Meanwhile, U.S. Coast Guard crews based in New Orleans are prepared to make rescues if needed, as soon as the storm passes.